The Trump administration’s trade assistance package and other government payments are keeping the farm economy afloat, while historically low interest rates are helping maintain agricultural land values, according to bankers and economists.

And they say that while many farmers are starting to eat into their working capital to stay in operation, the farm economy is nowhere near the crisis of the 1980s when growers were far more heavily leveraged.

Net farm income is projected to rise to $88 billion in 2019, up $4 billion from 2018, according to USDA, but the increase underscores the importance of federal aid.

But $33 billion of out of the $88 billion in farm earnings will come in the form of federal support payments, including checks for crop insurance indemnities, disaster aid, farm program payments, and the Trump administration’s Market Facilitation Program, which was created to compensate farmers for the impact of recent trade wars.

Federal farm support in 2019 is projected to increase by 53% while income from crops and livestock is down 14% from 2018, American Farm Bureau Federation Chief Economist John Newton said during a Farm Foundation forum in Washington Tuesday.

If farmers had no federal support other than crop insurance, net income this year would be closer to $69 billion and rank in the bottom 50% all time, he said. 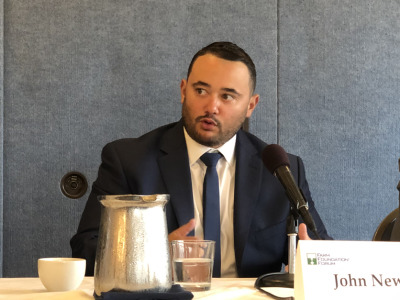 Another round of MFP payments will be needed in 2020 if the trade war with China continues, said Byron Enix, president and CEO of American AgCredit, which serves much of California as well as producers in Nevada, Colorado, New Mexico, Kansas and Oklahoma. MFP payments are "vital" to producers, he said. "It's not a long-term solution, but for a short-term problem it has helped immensely," Enix said.

He and other Farm Credit System leaders have been briefing congressional staff and farm groups this week on the farm economy.

Working capital, which serves as a cushion in downturns, “has come down quite dramatically,” said Jeff Swanhorst, CEO of AgriBank of St. Paul, a regional funding bank that serves associations across the Corn Belt west to Wyoming and down to Arkansas.

“If that farmer is not generating adequate cash flow in his farm operation from net income that shortfall is going to come out of working capital,” Swanhorst said.

The current debt-to-asset ratio in U.S. agriculture of 13.5% is far below what it was in the 1980s. That shows U.S. agriculture in a “very strong position” overall, but that “is not evenly dispersed,” Swanhorst said.

American AgCredit reports credit ratings for dairy farms in the states it serves have declined significantly over the last several years.

In three out of the last four years, dairy income has been at or below breakeven levels. Many operations will need years of profitability to restore necessary liquidity and lost equity, the bank says.

The sector is expected to be profitable for the next 12 to 18 months, but “we do not think that will return everything that’s been lost over the last three years,” said Enix.

Seth Meyer, a former USDA economist who is now associate director of the University of Missouri’s Food and Agricultural Policy Research Institute, said 2020 looks to be harder for farmers. 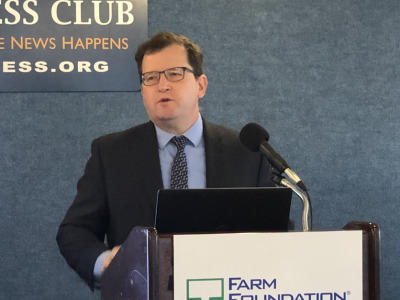 “When you look out in terms of commodity prices, global demand and carryout stocks, the kind of competition we invited when commodity prices were higher, we do have a challenging environment going forward,” Meyer told Agri-Pulse.

Meyer said the period of farm income between 2010 to 2014 was historically unusual but that there is always the possibility of another event that could drive up commodity prices.

“You never know where that demand spark is lurking,” Meyer said. “We talked today about China being the demand spark over the last ten years on a global scale ... there’s always the possibility.”

In the meantime, some landowners may pull some acreage out of production.

Due to the tough farm economy, AgriBank’s Swanhorst said he expected there to be “heavy interest” in the Conservation Reserve Program when the general sign-up begins in December.