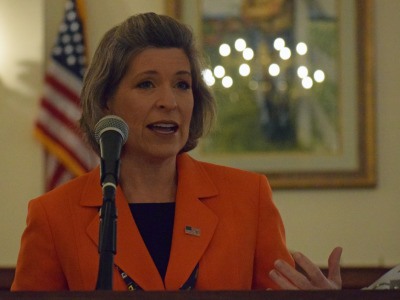 Senate Republicans are preparing to roll out a $1 trillion coronavirus relief package that a key senator says will likely include $20 billion in additional funding for USDA to help compensate farmers for pandemic-related losses.

Iowa Sen. Joni Ernst, a member of the GOP leadership, said the $20 billion would be provided as additional spending authority for USDA. USDA currently has another $14 billion still available in its Commodity Credit Corp. account under the last major coronavirus relief bill, the CARES Act, enacted in March.

Ernst said the GOP package also would “allow greater flexibility” for Agriculture Secretary Sonny Perdue to decide how to distribute the money. The latter is an issue likely to put GOP senators at odds with congressional Democrats.

It’s not clear what additional agricultural spending could be authorized by the bill. Sen. John Hoeven, who chairs the Agriculture Appropriations Subcommittee, has indicated that the agriculture aid would likely total $30 billion to $35 billion, in line with the $33 billion provided by a $3 trillion bill, called the HEROES Act, that the Democratic-controlled House passed in May.

USDA needs the CCC authority for other purposes as well, including dispensing payments due to farmers in October under farm bill programs, including the Price Loss Coverage and Agriculture Risk Coverage programs as well as the Conservation Reserve Program.

Senate GOP leaders ignored the HEROES Act, but Majority Leader Mitch McConnell, R-Ky., said Tuesday that he expected to release the GOP bill this week, setting the stage for negotiations with congressional Democrats.

“That’s a starting place for discussion with the Democrats. Clearly, they have the ability to stop us from passing anything,” McConnell told reporters.

McConnell acknowledged that the proposal didn’t have unified support among Republicans. Sen. Rand Paul, R-Ky., threatened to slow down the bill because of its cost.

Senate Republicans led by Agriculture Committee Chairman Pat Roberts, R-Kan., have resisted putting restrictions on how USDA can use its CCC authority. The HEROES Act, by contrast, provided specific directions to USDA on how to use CCC funding, including making a new round of Coronavirus Food Assistance Program payments to farmers.

“This idea that we’re going to give more money to the CCC, where we are really having no kind of oversight or kind of involvement in it whatsoever, is not a good idea long term, because you’re basically taking the Ag Committee out of this whole situation,”  Peterson said.

Perdue, meanwhile, told farm broadcasters that the department is considering making additional commodities eligible for CFAP and is assessing the needs for a second round of CFAP payments.

“We’re in the process of evaluating the COVID-19 impacts on the agricultural economy and looking back and lessons learned so far as we consider a second round of CFAP,” he said in a video message to members of the National Association of Farm Broadcasting.

Perdue said he doesn’t believe that farmers will need another round of the Market Facilitation Program in addition to the CFAP payments they will be getting. MFP was created in 2018 and repeated in 2019 to compensate farmers for the loss of exports caused by President Donald Trump’s trade wars.

Lawmakers and farm groups continue proposing additional forms of assistance that could be included in a coronavirus relief bill.

The National Association of Wheat Growers sent a letter to congressional leaders saying the next bill needs to direct USDA to change the way it calculates eligibility for CFAP payments. The payments were limited to commodities that dropped 5% in value between January and April.

USDA earlier this month declined an appeal from NAWG to expand the types of wheat that are eligible for payments. Hard red winter, soft red winter and white wheat are not eligible for CFAP, while durum and hard red spring wheat are.

In the letter, NAWG urges lawmakers “to include provisions that would require USDA to factor in the actual economic conditions being experienced by growers at a local level.”

Reps. Darin LaHood, R-Ill., and Jimmy Panetta, D-Calif., introduced a proposed tax credit that produce and produce distributors could claim for uncollected bills as a result of disruptions in restaurants and food service. Fruit and vegetable distributors hold an estimated $5 billion in uncollected debt.

Ben Nuelle and Spencer Chase contributed to this report.