Little rainfall and high temperatures were already taking a toll on Craig French’s northern Montana rangeland. Then, grasshoppers took out half his pasture land, starting with the clover and alfalfa before moving onto the finer grasses.

Now he's been forced to consider selling some or all of his 250 cows and 120 yearlings.

“Pastures that I've rotated through and got off of them and had some regrowth and was looking forward to either grazing that next spring or in the wintertime — that grass is gone. That's not even stretching it. It's gone," he said.

This year he planted around 200 acres of barley, peas, collards and radishes as a cover crop, and on June 14, five days after a rain shower, some of the plants were nearly 6 inches tall. By June 17, almost nothing remained.

French is certain that grasshopper populations on some parts of his ranch are 10 to 12 times higher than the 8-per-square-yard threshold USDA uses to determine if the grasshopper threat has reached a level of "economic infestation," and therefore, qualifies for the agency's suppression program.

Officials with USDA's Animal and Plant Health Inspection Service and local extension agencies have counted more than 15 grasshoppers per square yard in areas across 34.8 million acres of land in the West, including large swaths of Montana and Oregon as well as small parts of Nevada, Idaho, Wyoming, Colorado, New Mexico, Kansas and Arizona. These states — and to a lesser degree, Utah, California, North Dakota, South Dakota and Nebraska — are all experiencing the second-largest grasshopper outbreak that the U.S. has seen in 35 years, according to Bill Wesela, a national policy manager at APHIS. 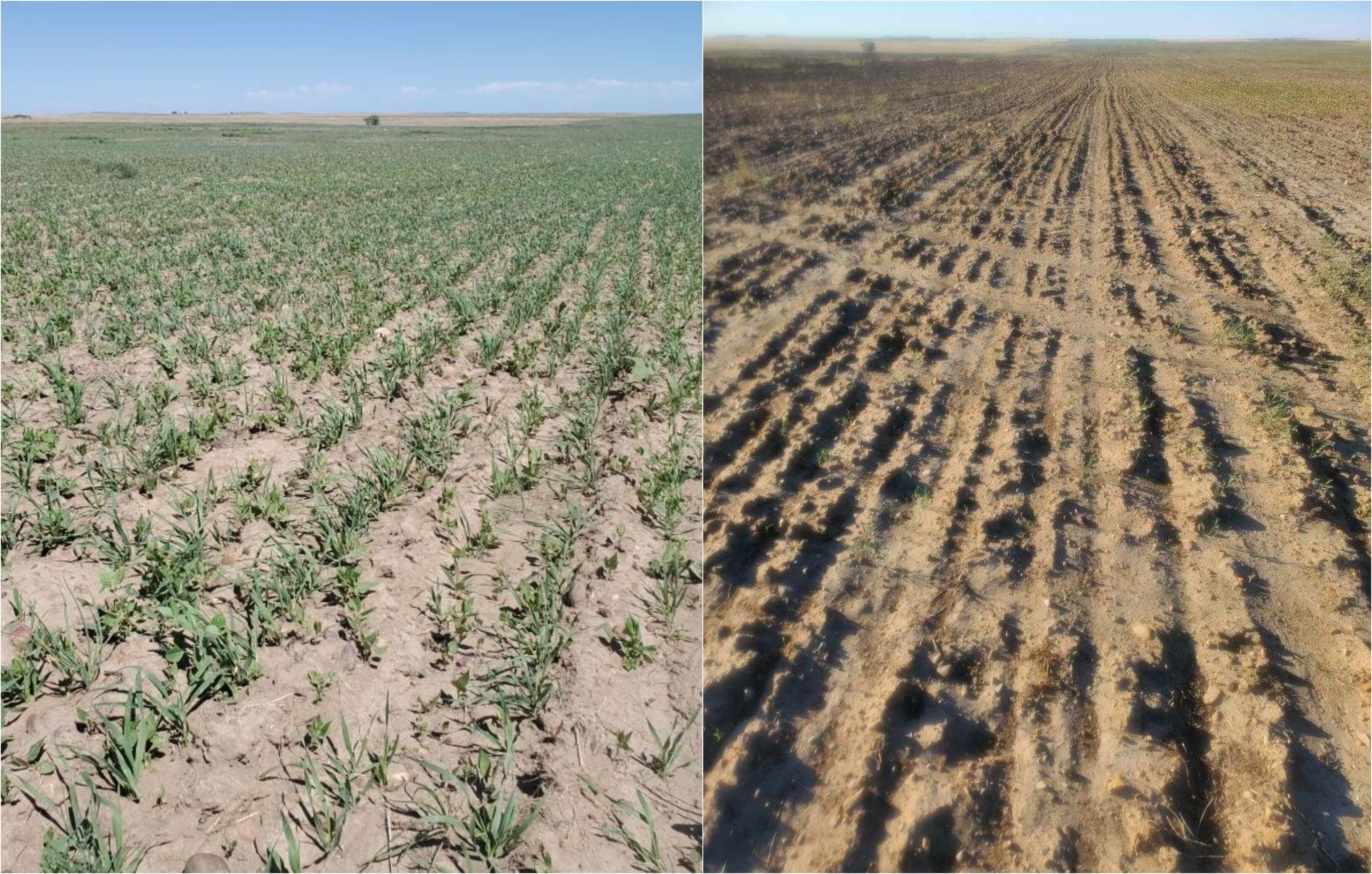 A field of Craig French's cover crops before and after being eaten by grasshoppers.“Grasshopper outbreaks are partly related to the climate conditions,” said Kevin Wanner, an associate professor of plant sciences and plant pathology at Montana State University. “They naturally increase their numbers during hot, dry periods because there are some natural diseases, but the natural diseases of grasshoppers are more prominent during cool, wet seasons than they are during hot and dry seasons.”

Using the authority of the Plant Protection Act, passed in 2000, APHIS provides treatments for producers through its Grasshopper and Mormon Crickets Program. Funded by allocations made annually by Congress, the program supports surveying of grasshopper populations and suppression efforts on public, state and private lands where grasshoppers are at levels of “economic infestation.”

As of July 19, APHIS treated approximately 805,000 acres of rangeland for grasshoppers in Arizona, Idaho, Montana, Nevada, Utah and Wyoming, according to Wesela.  By using a system known as "reduced agent and area treatments," or RAATS, APHIS targets particular high-population sections of land within a broader 1.6-million-acre area that the agency is working to protect.

“We're not trying to eliminate all the grasshoppers,” Wesela said. “We're just trying to control and suppress the populations to a manageable, reasonable amount.”

Wesela said APHIS has primarily been spraying diflubenzuron, also known as Dimilin 2L, which impacts the formation of nymph grasshoppers’ exoskeletons in the molting process. Applicators in planes or on ATVs use the RAATS method to apply in grasshopper hot spots, while leaving rocky or low-forage areas alone.

APHIS employees are also allowed to use carbaryl and malathion when spraying, but only in more severe cases. Wesela said diflubenzuron is preferred because it's less expensive and specifically targets grasshoppers. 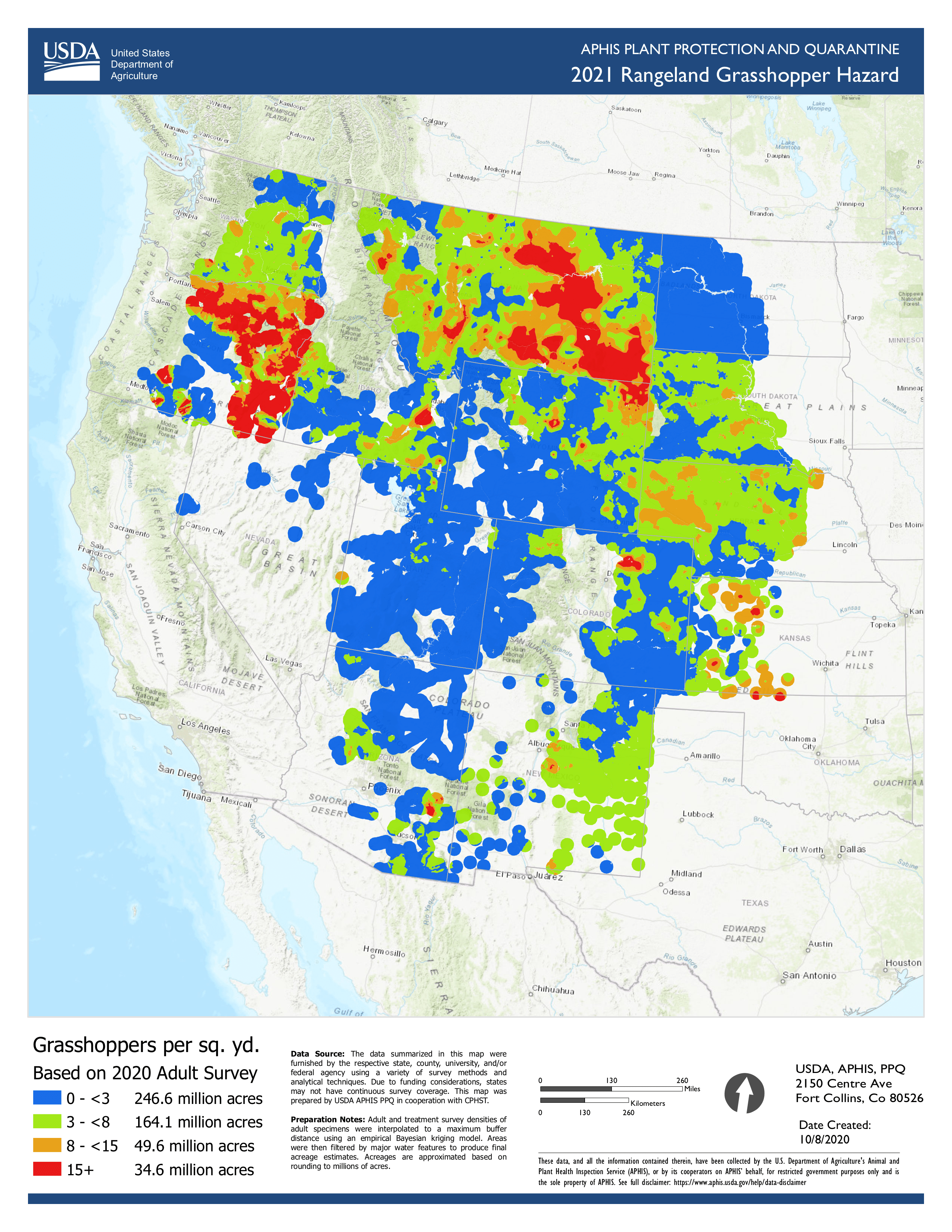 However, the program has drawn criticism from some environmental groups, including the Xerces Society for Invertebrate Conservation and the Western Watersheds Project. They argue these insecticides pose a threat to other insect species in the region and that APHIS hasn’t been transparent with the public about its treatment plans.

Sharon Selvaggio, a pesticide program specialist for the Xerces Society, says wasps, spiders, ants and beetles — which act as natural predators for grasshoppers — could be harmed by APHIS treatments.

“These groups that help prey on young grasshoppers and help keep these grasshoppers from outbreaking in the first place, we have to avoid impacts on them,” she said. “We can't afford to cause harm to these kinds of insects.”

Selvaggio said she realizes grasshopper outbreaks come at a cost to producers, but she suggests the government look at expanding crop and rangeland insurance programs or providing assistance for purchasing hay rather than using insecticide treatments.

"We need to think outside the box here," she said. "Our solution is to look at the habitat management, look at the economic justification, look at alternative solutions to make people whole."

One of USDA's 2021 environmental assessments for treating grasshoppers in Montana acknowledged using the RAATS system wasn’t completely free of risks, but was the “preferred alternative” to not doing anything. The report states if APHIS were to do nothing, more state and local agencies or individual landowners might attempt their own treatments for grasshoppers using chemicals that APHIS considers “too environmentally harsh.” And if grasshoppers are left to destroy grasslands unrestrained, plant growth could be impaired for years, leaving the soil unprotected, the report said.

Wanner said in a drought, large populations of the insects can descend on rangeland and eat their way through dry grasses that don’t have adequate moisture to regrow. They then move from grasslands to croplands, eating from the edges of the field inward.

"You could be looking at — for some producers, some of their fields — a total crop loss,” he said.

Heather Kingdon, who, with her husband Brian, has 420 mother cows and 300 of their calves on five different ranches near Taylorsville, Calif., say they have lost about half their forage crop to the combination of drought and the “clouds of grasshoppers” that pass through their fields. The Kingdons have been paying $400 to irrigate their hay fields every day, but most of the extra grass they were able to produce has been mowed down by grasshoppers.

“You kind of think, well, at least if you have water and you can grow grass, then at least that ranch will have feed,” she said. “But then when the grasshoppers eat it — it's kind of like you're defeated twice.”

Kingdon sees grass as money. To keep the cattle, she said she and her husband need to have enough hay and forage to feed them. However, this year, they are looking at buying 100 tons of hay, the same amount their land would normally produce, for about $240 a ton. It amounts to an extra $24,000 they wouldn’t have spent otherwise.

“It's a difficult year, being that it's so droughty, you've got very little feed and the water is short, and then to have anything you can grow get eaten by grasshoppers — it's rather defeating,” she said.

In Montana, Nancy and Michael Fred Ereaux, who live 12 miles away from French and normally cut around 160 acres of alfalfa, don’t expect to harvest a single acre this year. Nancy remembers watching as the grasshoppers swarmed a pasture in front of their house and ate all of the leaves and even the upper sections of stems. 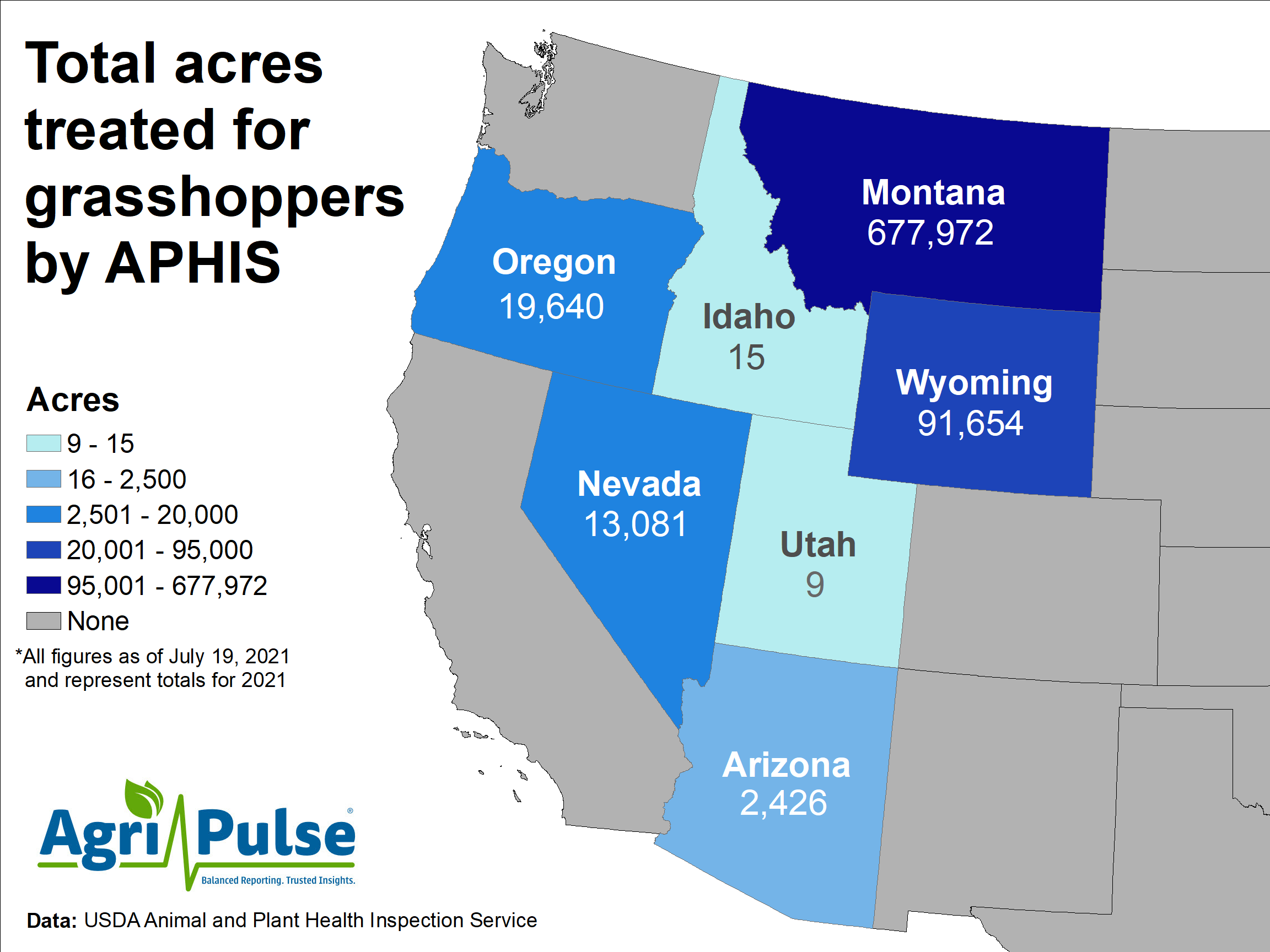 They qualified for the APHIS program after a survey found more than 25 grasshoppers per square foot in some locations. Michael Ereaux said APHIS sprayed a three-and-a-half-by-seven-mile swath over the ranches while making sure to stay 500 feet away from water sources. He said private landowners participating in the program have to pay one-third of the treatment cost — for him, about $2.20 an acre.

"[APHIS] didn't force anything on us, just wanted to know if we wanted to proceed and we opted to," Ereaux said. "I'm glad we did."

Producers can spray for grasshoppers outside of the APHIS program, but it's expensive, and it may not even be effective if their neighbors don't treat their land. The cost of treatments has doubled to about $20 an acre since the first few weeks of the infestation, said Nick Macy, a licensed agricultural pest control adviser and the owner of Macy’s Flying Service in Tulelake, Calif. This is because diflubenzuron loses its effectiveness as the grasshoppers mature and grow wings, forcing applicators to turn to other, more expensive insecticides to effectively control grasshopper populations.

Macy, who has sprayed more than 20,000 acres in southern Oregon and northern California, said some producers who had their land treated saw grasshoppers move in from untreated areas and re-infest their property.

“We get into situations where other growers will not spray or cannot spray or can't afford to spray, and then they encroach back onto their neighbor's property,” he said.

Organic farmers have fewer options, since they can't use the chemical insecticides. However, there is disaster assistance available through the Farm Service Agency for producers from counties where a drought disaster has been declared, according to the Montana Organic Association. Grasshopper infestations correlate heavily with drought and since FSA makes no distinction on whether crops are more impacted by drought or grasshoppers, producers can apply for this assistance.

French, while not being a certified organic producer, doesn't like to use pesticides on his land and chose not to participate in the APHIS program. He doesn't see selling off his cattle as a bad thing. He believes it will help his soil regain nutrients that have been depleted over the years from grazing. He compares the impact of grasshoppers on the landscape to the body’s response to a virus — if the land has been overstretched, its response to threats like grasshoppers will be weakened.

“If we have depleted our soils to the point where they cannot fend off grasshoppers, well, then it's just as much our fault for doing that as it is the lack of rain,” he said. “I'll take some responsibility for what's going on right now, it's not all an act of nature.”