New approaches to nitrogen management, developed at land-grant universities, are changing the paradigm for farmers, prompting them to use less fertilizer, save money, and help reduce the toxic algal dead zones in the Gulf of Mexico, the Great Lakes and other bodies of water.

The so-called “variable-rate N” approach, pioneered by University of Illinois researchers, measures a field’s organic nitrogen and calibrates an application approach tailored to the needs of the field, rather than relying upon the one-size-fits-all “1.2 times expected yield” method developed in the 1960s, said Richard Mulvaney, a soil expert and University of Illinois research professor.

Backers of the technology say farmers who choose to partner with agronomists who use variable-rate N will initially spend more for the testing but will quickly make up the difference in nitrogen efficiency, as the areas of their field that have the least organic nitrogen will receive the most synthetic help, and the ones with the most will receive less.

A soil profile is developed following a precise sampling process where the presence of amino sugars in the soil serves as a litmus test for high amounts of organic nitrogen, according to GMS Laboratories President Georgia Steffen. The agronomist can have test results within 24 hours, and then provide specific recommendations for spraying as directed by Global Positioning System coordinates, Steffen said.

The mineralized or organic form of nitrogen is naturally high in Midwest soils, and traditional approaches to nitrogen management overlook this fact, said Richard Mulvaney, a soil expert and University of Illinois research professor. Farmers have essentially been over-spraying their fields for years, he said, inadvertently killing the critical microorganisms that enrich soils while draining fields dry of organic nitrogen as the naturally-occurring nitrogen cycle in their fields gets disrupted. 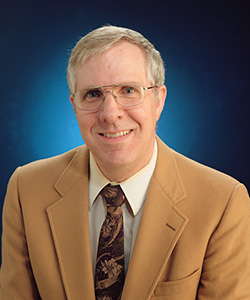 “That method implicitly makes the assumption that more nitrogen means higher yield,” Mulvaney said. “The higher the yield goal, the more the N that is applied. There is no connection between fertilizer nitrogen rate and yield. Some soils yield very well with low N and other soils need a lot of N. The fertilizer industry benefited immensely from this formula. If it hadn’t been for 1.2, they would have lost their business years ago. It has milked farmers and benefited the dealers.”

The fertilizer industry begs to disagree.

“The formula and one-size-fits-all depiction characterized is grossly inaccurate,” said Kathy Mathers, vice president of public affairs for the Fertilizer Institute. “Looking at the efficiency numbers, farmers are essentially doubling their output, growing 114 percent more corn using just 4.5 percent more fertilizer than they did in 1980. Fertilizer use has been essentially level since the 1960’s.”

The industry has maintained its commitment to nutrient management as well as a site-specific approach, said Mathers. Its Nutrient Stewardship Framework, supported by the USDA and Nature Conservancy, along with its $7 million Nutrient Research Fund and advocacy of state-based projects looking at nutrient loss testifies to that commitment, Mathers said.

The Fertilizer Institute encourages farmers to look at what is in the soil and develop a balance, Mathers said. “We encourage farmers to use on-site manure and have it tested, to look at what crops they are growing and then develop a prescription for fertilizer use,” she said. “It’s more complex than a one-size-fits-all approach.”

Meanwhile, nitrogen management company Cropsmith, based in Farmer City, Illinois, believes it has harnessed the power of variable-rate N. Confident in its technology, the company’s owner, Tim Smith, sent a team of agronomists to Louisiana to participate in the Tulane University Nitrogen Reduction Challenge.

The competition is looking for market-based solutions to solving the nitrate leaching problem that has caused the hypoxic, or low-oxygen, areas in the Gulf and other bodies of water. A $1 million prize will be awarded to the team that proves their nitrogen management methods result in the least amount of leaching while still leading to a successful crop yield. A panel of university experts and agriculture industry professionals will determine to what degree the winning methods would be marketable to the agriculture industry.

Smith and his team made six trips to Louisiana and implemented their variable-rate methods on five one-acre plots on a farm on the west side of the Mississippi River. Cropsmith is now one of four finalists out of 77 registrants for the prize to be awarded in December. Smith says his approach can keep input costs low – as low as $2-$3 per acre – and the benefits are in line with Illinois’ Nutrient Loss Reduction Strategy, which calls for a 45 percent reduction in phosphorus and nitrate loads by 2025.

“The state’s goal-setting is aggressive,” Smith said. “It is going to take a lot of work, and by 2025 there are benchmarks that have to be reached. It is going to take everybody doing more to reach those goals, and as people start seeing how successful our program is, we will start seeing a lot more of them adopting these practices.”

Dave White, former director of the Natural Resources Conservation Service, suggests that farmers follow best practice guidelines that help them conceptualize their nitrogen use. Any good nutrient management plan, he says, follows the four R’s — applying the right form of nitrogen at the right time, with the right rate, using the right method.

Farmers should, when practical, avoid applying too much nitrogen, control the dispersement of nitrate through residue and tile management, and trap the nitrate using contour buffer strips or edge-of-field practices like denitrifying woodchip bioreactors and saturated buffers, White said. 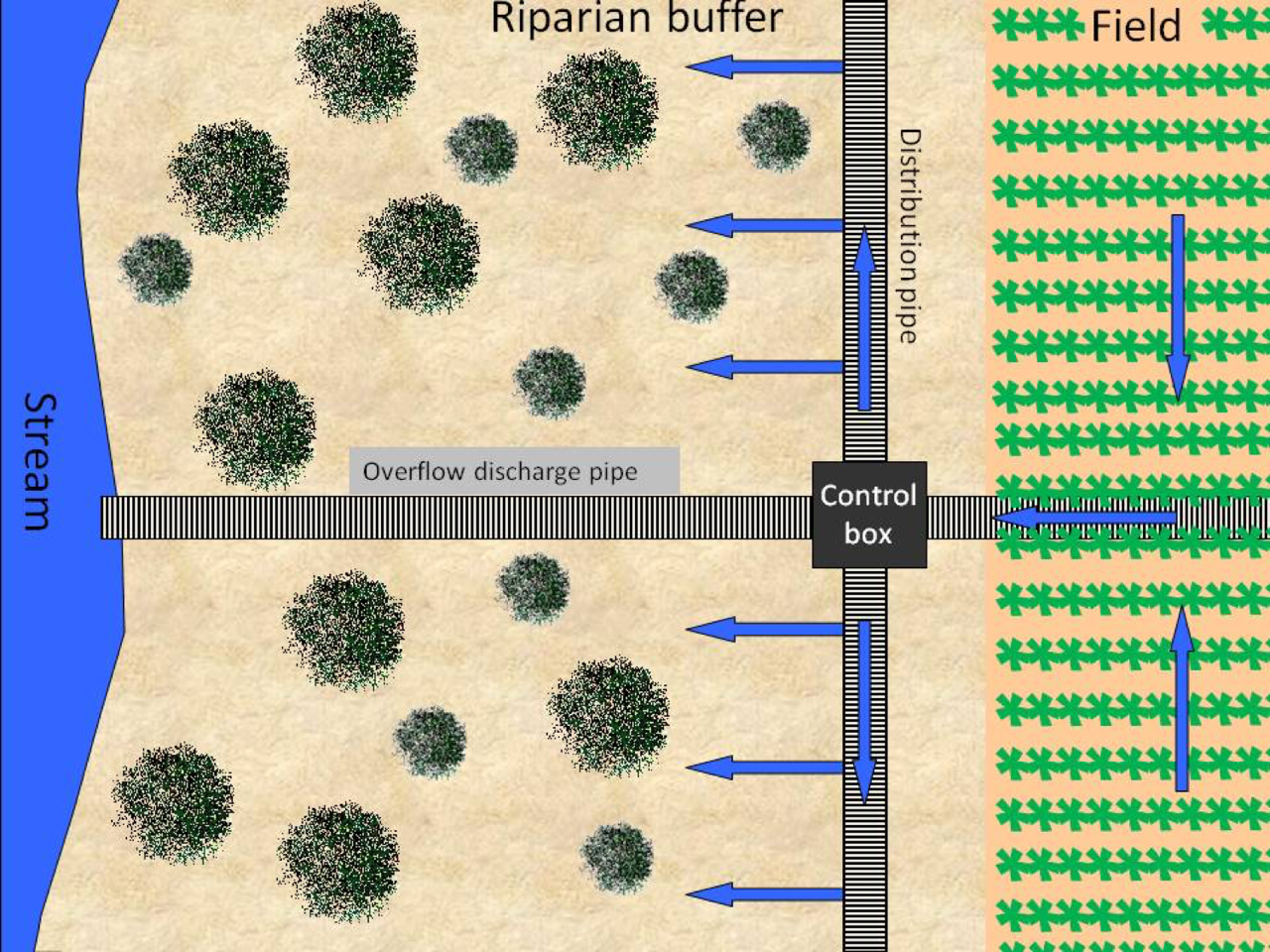 Woodchip bioreactors are trenches lined with woodchips that tile drainage is routed through. Nitrate run-off from the tile system is intercepted by the bioreactor and the microorganisms that convert about 98 percent of the nitrate into a harmless form of nitrogen gas, with only a small percentage left as nitrous oxide, said University of Illinois Crop Sciences Professor Laura Christianson.

Although research on woodchip bioreactors has been going on for the past 20 years, recently there has been an explosion of research groups from around the U.S. studying the practice, Christianson said. Currently, the method is somewhat cost-prohibitive for farmers, but NRCS Environmental Quality Incentives Program (EQIP) funds can cover roughly half the cost, Christianson said. Farmers enrolled in EQIP have bioreactors designed and installed by NRCS.

Saturated buffers (pictured to the right) provide a more cost-effective way to ensure that much of the nitrate is captured before it leaves the field, said Dan Jaynes, a soil scientist with the USDA Agricultural Research Service and Iowa State University. Farmers can work with tile contractors to reroute the tile line so that 30-60 percent of it drains into an existing riparian buffer that lies adjacent to many farm fields. A control box allows the user to raise or lower the water table as needed. These riparian buffers, commonly consisting of perennial vegetation, contain natural bacterial biota that will denitrify the nitrate instead of directing it into nearby streams, Jaynes said. Studies show that between 40 and 100 percent of the nitrate entering the buffer is removed, Jaynes said.