Democrats and Republicans once again are battling over whether to open Alaska’s Arctic National Wildlife Refuge (AMWR) to oil and gas drilling, and money, the environment, and the GOP’s tax cut bill are at the heart of the matter.

The nonpartisan Congressional Budget Office estimates that legislation to open a small portion of ANWR could generate an additional $2.2 billion in new federal leasing revenues. The $2.2 billion would be split 50/50 between the federal government and Alaska.

Because the plunge in global oil prices from their 2014 peak has left Alaska with a $2.8 billion budget deficit, Alaskans generally, along with the state’s governor and its congressional delegation, support opening ANWR’s primeval Coastal Plain to drilling. They welcome the possibility that new lease revenues could cut the state’s deficit by more than a third and potentially return dividends to a higher level. Any Alaskan who has been in the state longer than one year has been getting a check for around $2,200 each year - a dividend from the state’s Permanent Fund. That payment can go up or down, depending on the fortunes of the state’s energy industry. This year’s check will be $1,100. Alaskans also welcome the prospect of more jobs, more oil production, and more oil pumped through the now underused Trans-Alaska Pipeline, which funds over 80 percent of the state’s budget.

The ANWR bill’s author and chair of the Senate Energy Committee, Alaska Republican Lisa Murkowski, forecasts that in addition to reaping $2.2 billion in new lease bid revenues by 2027, passing her legislation would create the “likely” prospect that “tens of billions of dollars in new federal revenues will be generated after production begins just outside the 10-year budget window.”

In a Nov. 8 press release announcing the ANWR bill, Murkowski was joined by the state’s other U.S. senator, Dan Sullivan, its lone representative, Don Young – both Republicans – and Alaska Gov. Bill Walker, an independent, in forecasting even greater potential revenue.

The bill, they said, “will put Alaska and the entire nation on a path toward greater prosperity by creating jobs, keeping energy affordable for families and businesses, generating new wealth, and strengthening our security – while reducing the federal deficit not just by $1 billion over 10 years, but tens or even hundreds of billions of dollars over the decades to come.”

One major complication is that most Democrats and environmental groups aggressively oppose ending the 40-year ban on drilling in ANWR. The Senate Energy Committee’s ranking member, Maria Cantwell, D-Wash., warned in the bill’s contentious markup that Murkowski’s bill would “change current law of the Arctic National Wildlife Refuge and turn it into a petroleum reserve. ... It turns the Coastal Plain in this refuge into an oil field.”

Cantwell charged after the markup that “It is a tragedy that Republicans will run over something so precious as the Arctic National Wildlife Refuge, land that has that stood undisturbed for thousands of years, all for a giveaway to oil corporations that allows them to ignore important environmental protections."

“The notion that oil prices have fallen and a state has been over-reliant on oil does not mean that we should be destroying a wildlife refuge today,” she said.

In the markup session, Cantwell complained about the lack of bipartisanship. “The Republicans in charge here, instead of working in a bipartisan, regular-order process, have now determined that the only way you can get legislation through here is by having hearings without the legislation, hiding the information from the general public . . . and then trying to rush it through in breakneck pace,” she said.

The bill’s markup last week ended with a largely party-line 13-10 vote to rescind the drilling ban. The committee’s GOP majority was joined by a lone Democrat, Joe Manchin of West Virginia. He explained that as a coal-state senator, he supports allowing states to make use of available energy resources.

But Manchin also stressed his “extreme disappointment” with the arcane budget process that the GOP leadership is using so that it can pass its priority tax-overhaul legislation with a bare 51 votes rather than the Senate’s normal 60-vote supermajority.

The ostensible tie linking tax-overhaul legislation to the ANWR drilling bill is that to pass the new tax law with just 51 votes, the tax bill can’t increase federal deficit spending over 10 years by more than $1.5 trillion. To squeeze under the $1.5 trillion ceiling, the Senate Finance Committee ordered the Energy Committee to find at least $1 billion in new revenue to help offset the GOP’s proposed tax cuts.

Following the Energy Committee vote, Murkowski’s ANWR bill is on track to become part of the tax cut bill that Republicans hope to have President Trump sign into law before Christmas.

Yet, as Cantwell pointed out in the markup, the $1 billion that ANWR drilling might generate would be “about 7/100ths of 1 percent of the Republicans’ increased deficit spending.” She said this minuscule contribution to deficit reduction “shows that this is not a serious budget proposal. It’s a cynical effort to open up the heart of the Artic Wildlife Refuge for oil.”

Part of the challenge is that based on her past voting record, Murkowski is not a guaranteed vote for tax reform in a situation where every vote counts. Vice President Mike Pence could provide the 51st vote to break a 50-50 tie. So, the Senate’s 52 Republicans can only afford to lose two senators in a tax bill vote.

One way to win Murkowski’s vote is to deliver what first her father, former Sen. Frank Murkowski, and now his daughter have championed for decades – ending the ban on ANWR drilling.

Making the pitch for her vote even sweeter, Murkowski says she expects ANWR drilling to generate a bonanza in new oil production and new wealth for both Alaska and the U.S. as a whole. This may be enough to overcome her concerns that the final tax bill might include provisions that could cripple the Obama healthcare program.

Cantwell, however, doesn’t expect an oil revenue bonanza, saying CBO’s revenue forecasts are uncertain estimates that could significantly overstate potential revenues. During the markup, Cantwell supported an amendment offered by Sen. Ron Wyden, D-Ore., that would cancel ANWR drilling if the first lease sale fails to raise the $725 million that the CBO expects.

The Wyden amendment was defeated along with every other amendment offered by Democrats, all on largely party-line votes. But the amendment gave Cantwell the opportunity to argue that, based on the track record for Alaska’s North Slope lease sales, the first ANWR lease sale required within four years “would bring in $76 million at the most” – far below the $725 million that Murkowski is counting on.

Cantwell added that to generate $725 million, the federal government would need to offer leases on 4 million acres of ANWR, “not the 400,000 acres” specified in Murkowski’s legislation.

In one of their often-testy exchanges, Murkowski responded to Cantwell that even though the first of the two lease sales mandated in the ANWR bill might not bring in $725 million, “The second lease sale could be $5 billion.”

In another response to Democrats’ charges, Murkowski acknowledged that her bill would switch the Coastal Plain’s legal purpose from wildlife protection to oil and gas development and that it would switch management of the area from the Fish and Wildlife Service to the Bureau of Land Management. But Murkowski insisted that these changes will apply “for just the Coastal Plain” and the rest of ANWR “will continue to be managed by FWS as a wildlife refuge.”

Democrats also charged that there are plenty of other places to drill in Alaska since oil companies already lease more than a million acres in the state but are only active currently on 17,000 acres, or less than 2 percent of the leased areas. Murkowski’s response was that the Coastal Plain offers “much better prospects” for significant oil and gas production.

In a press briefing Monday, the Natural Resources Defense Council (NRDC) responded to Murkowski’s view that ANWR could unleash an oil bonanza. Niel Lawrence, Alaska director for NRDC’s Land and Wildlife Program, said that instead of Murkowski’s “bizarre” forecast for $1 billion in lease bid revenues over the next 10 years, “the best-case scenario would yield a total of perhaps $75 million.” Lawrence added that “No amount of oil from the Arctic Refuge is going to make up more than a few days’ or weeks’ worth of American consumption . . . and trading that for this pristine icon of the natural world . . . is a bad trade.” 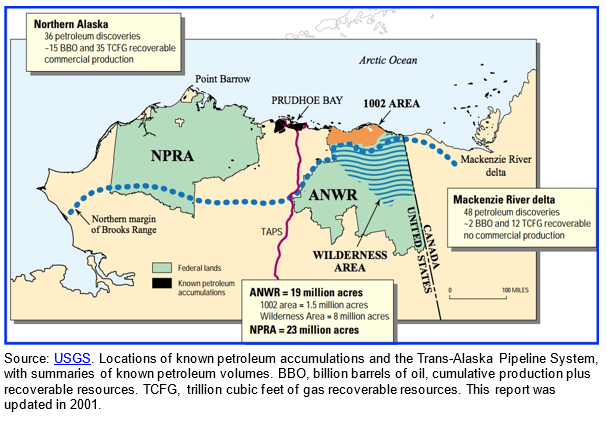