Home » Biomass struggles for a spot in energy mix
Energy

Biomass struggles for a spot in energy mix

Biomass and waste fuels provided just 2 percent of total U.S. electricity generation in 2016, a total of 71.4 billion kilowatt-hours (kwh) of energy. The figures are according to the latest U.S. Energy Information Administration Power Plant Operations Report.

Wood solids accounted for nearly a third of the electricity generated from biomass and waste. Most wood solids come from one of three sources: logging and mill residues; wood, paper, and furniture manufacturing; and discarded large timber products, such as railway ties, utility poles, and marine pilings.

Fuels that are byproducts of chemically processing wood are known as wood-derived fuels. Almost all wood-derived fuels are waste that was created as a byproduct of making paper-related products. The dominant wood-derived fuel is black liquor, a byproduct of the kraft pulping process, which involves the digesting of wood chips at elevated temperature and pressure in a water solution of sodium sulfide and sodium hydroxide. Black liquor accounted for 27 percent of 2016 biomass- and waste-generated electricity. Other paper-making wastes used as fuel—including sludge waste, wood-waste liquids, and other biomass liquids—are also byproducts of the paper-making process, but combined they produced less than 0.5 percent of 2016 biomass-generated electricity.

Landfill gas is created by decomposing organic material in landfills. Its composition is about half methane (the primary component of natural gas) and half carbon dioxide (CO2). Landfill gas provided nearly 16 percent of 2016 biomass-generated electricity.

The remaining biogenic fuels account for just 5 percent of biomass-generated electricity. Most other biomass gas generation comes from wastewater 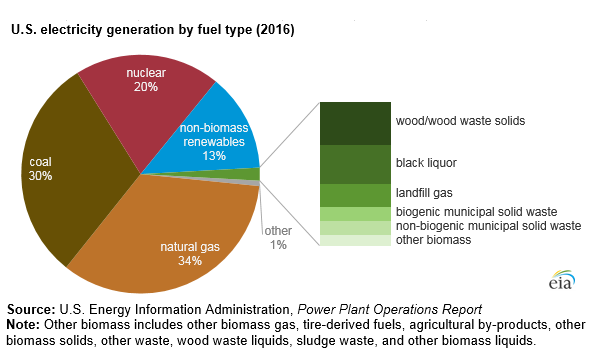 treatment plants. As a result of the steady and constant availability of this fuel source, other biomass gas-generating plants typically operate at high utilization rates. Other biomass solids include wastes that are byproducts of producing ethanol as well as crop-based and wood-based wastes. Agricultural biomass consists mostly of field crop residues and animal excretions.