After a journey of more than 3,000 miles, the “People’s Christmas Tree” is about to come back to life on the West Lawn of the U.S. Capitol.

An 11-year old boy named Ridley Brandmayr from Bozeman, Montana, will throw a switch to light up the 79-foot tall Engelmann spruce Wednesday evening before a crowd that’s expected to include Sen. Jon Tester of Montana, who represents the state that provided the tree, House Speaker Paul Ryan, Agriculture Secretary Sonny Perdue and Tony Tooke, chief of the U.S. Forest Service, which has been providing the tree for almost 50 years. Festivities begin at 5 p.m.

“It really is a fun ceremony,” said Bruce Ward, president of Choose Outdoors, the Denver-based non-profit that worked closely with the U.S. Forest Service to bring the tree to Washington. “It really helps to bring the Christmas spirit to DC.”

The journey began in the tiny town of Yaak, Montana, within the Kootenai National Forest, near where parts of the Oscar-winning film, “the Revenant,” were filmed. That’s where the tree, called "Beauty of the Big Sky," was harvested in early November.

Ward, who helped USFS find private-sector sponsors to defray the cost of moving the majestic evergreen, traveled with the tree through “whistlestops” in Montana, where thousands of children turned out with their homemade ornaments to decorate the tree. They also signed holiday greetings on the giant banner that hung from the side of the semi-trailer that carried the tree on its odyssey, which also featured stops in North Dakota, Minnesota, Missouri and Kentucky. 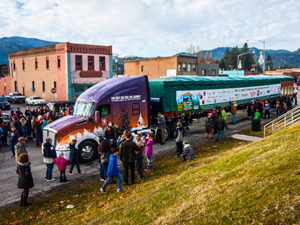 This truck carried the Christmas tree on its journey to Washington. (Photo: James Edward Mills)

By early this week, the tree was all ready to be illuminated, crowned with a five-foot tall eight-pointed star, made of copper, as a nod to Montana’s rich copper mining tradition. It also features a representation of Montana’s state flower, the bitterroot.

Ward noted that the lighting ceremony, which is open to the public, is also meant to call attention to the important role the U.S. Forest Service and its 30,000 employees play in managing activities – logging, grazing, recreation – in the more than 150 national forests.

“The Forest Service does a fantastic job,” said Ward, who’s been involved with bringing the Capitol Christmas Tree to Washington since 2012. “And that’s not just with the People’s Christmas tree,” he said, “but all year long.”