Sands getting feet wet in job as EPA agricultural adviser

Jeff Sands, the agricultural adviser to EPA Administrator Scott Pruitt, has not lacked for things to do since joining the agency in November.

Sands’ first three months have been “a very, very busy time,” he told Agri-Pulse in an interview. There have been meetings with farm groups, travel to trade shows, and the often-challenging job of keeping track of EPA activities affecting agriculture.

“The world of agriculture is very big and there’s a lot of moving parts to it,” Sands said, explaining that there is no “typical day” at the agency.

Sands said that so far, except for “a brief interaction” when he attended a Pesticide Program Dialogue Committee in November, he hasn’t met with environmental groups. “I haven’t had a request and haven’t had the opportunity to reach out,” he said, but added that he is “more than happy to meet with anyone.”

Sands came to his job with a heavy dose of experience representing agricultural interests. After receiving a master’s in public administration in 2011 from Valdosta State University in Georgia (he also has a degree in turf management from Abraham Baldwin Agricultural College in Tifton, Ga.), he worked for the Agricultural Retailers Association as director of public policy from 2012-2014 before landing at Syngenta, where he was a manager of federal government relations and industry relations for corn.

In both positions, he was a registered lobbyist, working on issues spanning the ag spectrum, including renewable fuels, pesticide regulation, and biotechnology. Before working for the Ag Retailers Association, he handled ag issues for Rep. Tom Marino, R-Pa., who represents a district in central and Northeast Pennsylvania. 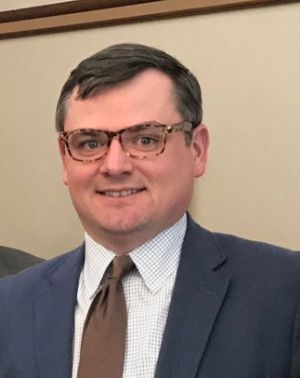 In the interview at his Washington office on Thursday, Sands laid out his priorities for the coming year. First, he said, is “enhancing and institutionalizing two-way communication between ag and rural communities, and from EPA back to that same community.” In addition, he said it’s hugely important that the interests of the farm and ranching communities be communicated to EPA managers who are developing regulations that may affect those communities.

“It’s a huge priority that we reinforce agency action with the perspective of those who are going to be affected by it,” Sands said.

Another big priority is getting the Farm, Ranch, and Rural Communities Federal Advisory Committee back up and running. One of numerous such advisory committees at EPA, the FRRCC comprises “representatives from academia, industry (e.g., agriculture and allied industries), non-governmental organizations, and state, local, and tribal governments,” according to the committee’s website. Their job is to “provide independent policy advice, information, and recommendations to the administrator on a range of environmental issues and policies that are of importance to agriculture and rural communities.”

“It’s a key committee to bring that ag and rural perspective in and hear what farmers and the rural community are doing to be good stewards, produce food, and support the rural American way of life,” Sands said.

Sands noted that the issues facing American farmers cut across many program offices at EPA: from the Office of Water to the Office of Chemical Safety and Pollution Prevention (OCSPP), which include the Office of Pesticide Programs, to the Offices of Air and Radiation and Land and Emergency Management.

“It’s a huge swath of where the agriculture community is affected by EPA actions,” he said.

On specific issues facing farmers, Sands could not offer too much detail, because the program offices in EPA are taking the lead.

Asked, for instance, about emissions reporting that will be required starting Jan. 22 for animal feeding operations, Sands said, “Our role in this so far has really been to help producers understand what’s required of them under the statute.”

A D.C. Circuit Court of Appeals panel has twice delayed the compliance date for the reporting to the National Response Center, required under the Comprehensive Environmental Response, Compensation, and Liability Act for emissions from manure that exceed 100 pounds per day of ammonia and/or hydrogen sulfide. EPA exempted reporting to state emergency planners of substances used in “routine agricultural operations” under the Emergency Planning and Community Right-to-Know Act.

He also said that the Office of Pesticide Programs has been engaged with stakeholders on the issue of labeling pesticides to protect bees. Letters were supposed to have been sent to registrants last spring with instructions on necessary mitigation measures, but they have not gone out yet.

Sands said OCSPP has been without leadership since the start of the Trump administration. Michael Dourson was nominated to head the office, but he withdrew his name from consideration last month after significant opposition to his nomination virtually guaranteed he would not be confirmed.

Regarding reauthorization of the Pesticide Registration Improvement Act (PRIA), which has been held up by Democratic senators, Sands said he has not been involved in negotiations but has been trying to “equip the program offices and other stakeholders with the information they need to try to get through this.”

Sen. Tom Udall, D-N.M., placed a hold on the PRIA bill in the Senate because he’s concerned that EPA will not implement its Worker Protection Standard to protect farm workers from pesticides, and its Certified Pesticide Applicator rule, which requires states to set up programs from the training and certification of applicators of restricted-use pesticides.

Sands said although the agency has asked for input on “three targeted issues,” including the minimum age requirements in both rules, EPA is nonetheless moving ahead with the rules.