The Senate today voted to end the partial government shutdown, now in its third day. The vote on the procedural measure was 81-18, with Democrats joining Republicans to provide well more than the 60 vote super-majority needed. 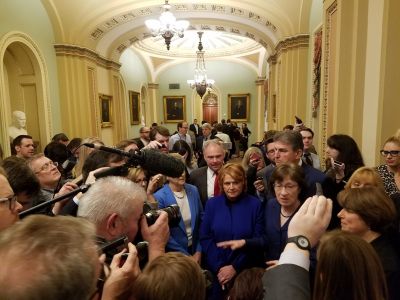 The Senate vote followed a pledge by Senate Republican leader Mitch McConnell of Kentucky to allow a “fair” debate on certain immigration issues including the fate of the so-called Dreamers. The leader of the Senate Democrats, Chuck Schumer of New York, said that if no immigration agreement is reached in three weeks, then the issue of the 700,000 or so undocumented immigrants who came to the U.S. as children will come to an up-or-down vote.

“It’s a shame … that the American people and the Senate have had to endure such hand wringing, finger pointing, stridency to secure a guarantee that we will finally move to address this urgent issue,” Schumer said. He blasted President Donald Trump for what he said was a failure to take a leadership role over the weekend in resolving the shutdown.

President Trump, meanwhile, welcomed Democrats’ decision to end the shutdown and said his administration would “work toward solving the problem of very unfair illegal immigration.”

“I am pleased that Democrats in Congress have come to their senses,” he added in a statement.