EU zooms ahead in trade deals while US stuck in neutral

When it comes to forging trade alliances around the globe, the European Union is moving at seemingly breakneck speed. The 28-country bloc is securing new and expanded markets in Asia, South America and North America while the U.S. seems to be in neutral or even reverse. That has left U.S. ag groups jealous and fearful that they are missing opportunities to expand trade while the U.S. loses global stature.

“We are now seeing an agenda coming to fruition which Europeans have been following over the last six or seven years,” said David O’Sullivan, head of the EU delegation to the U.S. “If we complete all these deals, we will be at the center of the largest free trade network the world has seen by 2019.”

O’Sullivan, who was featured on a trade panel this week at the Dairy Forum 2018 in Palm Desert, Calif., rattled off an impressive list of EU accomplishments. 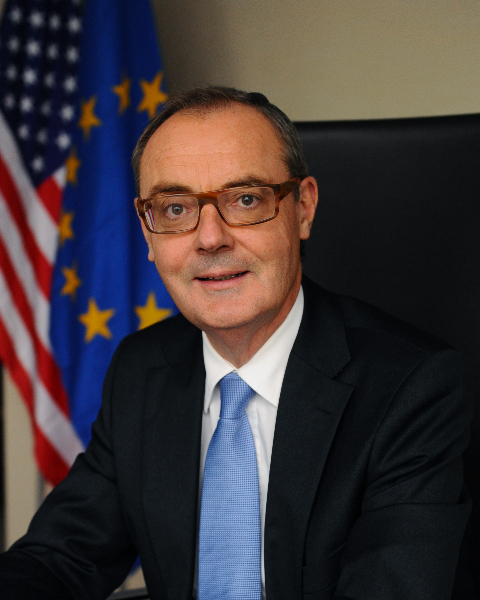 “We’ve just concluded last year – and it’s going into force now – an extensively ambitious trade deal with Canada,” he said proudly. “We are upgrading our trade deal with Mexico to be a fully comprehensive trade deal, which we hope we will finish in a matter of months. We are going to sign (a trade pact) with Japan in the next few months. We are going to enter into force our agreements with Singapore and Vietnam this year. We just announced (Monday) that we are upgrading our free trade agreement with Chile. And we will start negotiations this year with Australia and New Zealand.”

Furthermore, O’Sullivan announced that the EU expected to make progress this year to forge ties with MERCOSUR, the South American trade alliance that includes, Brazil, Argentina and others.

Michael Dykes, president and CEO of the International Dairy Foods Association, was the moderator of the panel and offered “kudos” to the EU.

The U.S. dairy sector, which is more and more dependent on the ability to export products like skim milk powder, butter, baby formula and cheese, is particularly vulnerable to competition for markets. It also is especially concerned about losing out to European competitors and the direction of the Trump administration when it comes to trade.

One of the first things President Donald Trump did after taking office about a year ago was pull the U.S. out of the Trans-Pacific Partnership (TPP), a trade pact with Japan, Vietnam, Chile, New Zealand, Peru, Singapore, Mexico, Canada, Australia, Vietnam, Brunei, and Malaysia.

Later, the Trump administration announced that the North American Free Trade Agreement and the U.S. trade pact with South Korea would have to be either renegotiated or terminated.

Trump, U.S. Trade Representative Robert Lighthizer and Commerce Secretary Wilbur Ross have all said they would be willing to pull the U.S. out of NAFTA, which has been widely lauded for tripling U.S. agricultural exports to Canada and quintupling sales to Mexico over the past two decades.

Dykes expressed frustration during the panel discussion over the U.S. strategy and lack of progress in trade negotiations.

O’Sullivan didn't help matters when he said that, in the EU's view, NAFTA was working very well for the U.S., and the TPP would have been very beneficial for U.S. exporters.

But the U.S. is no longer part of TPP, and the remaining 11 member countries announced Tuesday that they are ratifying the trade pact on their own.

Kent Bacus, director of international trade and market access for the National Cattlemen’s Beef Association, reacted, saying the U.S. needs to make progress in the NAFTA negotiations going on this week in Canada.

"Withdrawing from TPP was a missed opportunity for the United States to gain greater access to some of the world’s most vibrant and growing markets," Bacus said in a news release. "As we now enter a pivotal round of NAFTA negotiations, the last thing we need is to take a step backwards in our relationships with Canada and Mexico. We encourage negotiators in Montreal to continue building on the progress made in previous rounds so the United States can focus on tearing down trade barriers in Asia and around the world.”

Tim Groser, New Zealand’s ambassador to the U.S., was also on the panel at the Palm Desert convention Monday, and he seemed to know the TPP announcement was coming.

“We are going ahead, and we just want you guys to sort it out,” he said.

Dykes seemed to agree and lamented that the world wasn’t waiting to see what the U.S. would do next.

“The rest of the world continues to move along without the United States,” he said.