Perdue: US and EU make strides toward beef deal

U.S. complaints that Europe wasn’t living up to a promise to import American beef were ignored for years, but that’s changed in the months since the Trump administration started considering retaliatory duties on European imports.

Now the two sides are talking and it looks like a deal to boost U.S. beef exports could be reached soon, according to USDA chief Sonny Perdue.

“We're still negotiating with the EU over a hormone-free quota and we think we’ll have some resolution … soon,” Perdue told Agri-Pulse last week during a visit to dairy facilities in Pennsylvania. He added that U.S. Trade Representative Robert Lighthizer "is negotiating very stringently with them over that issue. I’m hopeful we can see some resolution.”

Those are welcome words, said Kent Bacus, director of international trade and market access for the National Cattlemen’s Beef Association. It’s been two decades since the U.S. won a World Trade Organization dispute over the EU ban on U.S. beef produced from cattle treated with growth hormones, but trade is still anemic.

The EU still bans hormone-treated beef despite the 1998 ruling by a WTO dispute panel and that doesn’t seem likely to change, but U.S. ranchers are still hopeful they can get a new deal that will boost beef exports to the 28-nation trading bloc.

It was in 2009 that the U.S. decided it would be better to strike a deal with the EU that allowed for some U.S. beef exports rather than go down the retaliatory path. Technically, the U.S. could have hit Europe with wide-ranging tariffs because the EU lost the case and still refused to lift its ban. Instead, the U.S. agreed to a European proposal in a memorandum of understanding, or MOU, to set up a 45,000-ton quota that would allow the U.S. to export beef to EU countries without the normal steep tariffs. 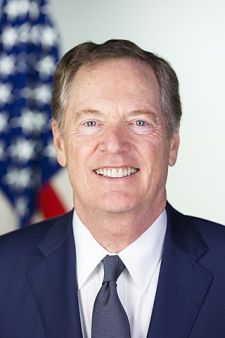 With the tariffs in place – most beef imports were saddled with a 20 percent tariff – it would have been impossible for U.S. ranchers to make a profit selling beef to the Europeans on those terms, Bacus said.

“It’s expensive … for U.S. producers to invest in these non-hormone-treated-cattle operations,” he explained. “And it takes years to develop not only the operation, but the supply chain.”

The six hormones banned by the EU are estradiol 17–b, testosterone, progesterone, zeranol, trenbolone acetate (TBA) and melengestrol acetate (MGA), according to the U.S. Trade Representative. Back in 1999, a WTO panel ruled that the damage to the U.S. from the EU ban was worth about $117 million per year.

For a while the quota worked out well, said Joe Schuele, communications director for the U.S. Meat Export Federation, but that did not last long.

“The U.S. started exporting beef to the EU under this quota,” Schuele said. “It had to meet all of the European requirements, but because it was duty-free, there was something of a viable business.”

However, the EU soon began approving other countries like Australia, New Zealand, Uruguay and Argentina to ship beef under the TRQ, and the U.S. began to be squeezed out.

“What’s happening is the quota is administered on a quarterly basis and about three or four weeks into each quota, it gets completely full … until the new quarter starts,” Schuele said.

After years of U.S. complaints, the USTR during the last weeks of the Obama administration decided to restart the process of the retaliation it's allowed under the 1998 WTO ruling. The USTR under the Trump administration followed through and held a hearing on retaliation in February 2017.

“Our initial support for the MOU was based on the expectation that the duty-free quota would create a new and lasting export opportunity for the U.S. industry,” Thad Lively, USMEF senior vice president for trade access, said at the hearing. “Instead, we have been confronted with the unacceptable fact that U.S. beef is being crowded out of the quota by countries that were not even at the table when the MOU was negotiated … Faced with the continued erosion in our share of the quota, we have been forced to conclude that further action is needed.”

Competing with the other countries in the quota, USMEF data show that the U.S. is only selling about 18,000 tons a year – what Lively called “a drop in the bucket” and far below what the U.S. could export under better conditions.

Bacus stressed to Agri-Pulse that NCBA is pleased that the USTR is pushing hard on the EU.

“Finally, the U.S. government put pressure on them and they’re trying to find some kind of possible solution to avoid retaliation,” Bacus said. “We’re just glad the U.S. government has made this a priority to resolve this issue because our producers have been getting the short end of the stick for a long time and it’s about time the Europeans were held accountable for their actions.”