The future of a proposal to restrict the use of nitrogen fertilizer in certain areas of Minnesota is uncertain after Gov. Mark Dayton (pictured above) vetoed an agriculture policy bill passed by the state’s legislature.

The reason, the governor said, was a provision in the bill ensuring that regulations addressing soil loss be returned to local control from the state Board of Water and Soil Resources. “The current soil loss law protects farmers' property rights by creating a practical process to deal with issues of excessive erosion from neighbors' lands and to achieve resolutions without going to court,” Dayton said in his veto letter.

The nitrogen fertilizer rule was caught in the crossfire. Ahead of the veto, the House and Senate agriculture committees, invoking a never-before-used provision in state law, passed a resolution to prohibit adoption of the nitrogen fertilizer rule until the end of the next legislative session in May 2019. But they promised that they wouldn’t file the resolution with the Minnesota State Register – the state’s version of the Federal Register – if Dayton signed the bill.

In his veto letter, Dayton said he was “appalled” at the committees’ passage of the resolutions, aimed at getting him to sign the bill.

Following public hearings and a comment period scheduled to close July 26, the Minnesota Department of Agriculture had planned to publish a final rule by the end of the year. But now those plans are up in the air.

“We can’t confirm what our exact next steps will be because legal issues may come into play,” MDA spokesperson Margaret Hart said. “For now, we are in the midst of the public comment period and we plan to proceed with the first informational meeting on May 30 as scheduled.”

As of Agri-Pulse’s deadline, the chairs of the committees had yet to take the formal step of filing their resolution with the Minnesota State Register.

Supporters and critics of the nitrogen fertilizer rule are both unhappy with the current state of affairs. Dayton pointed to the benefits of the bill he didn’t sign. For example, it would have waived the education requirement for beginning farmers to receive a tax credit if they “have already received agricultural education through a degree program or other programs like the Farm Business Management,” he said in the veto letter. 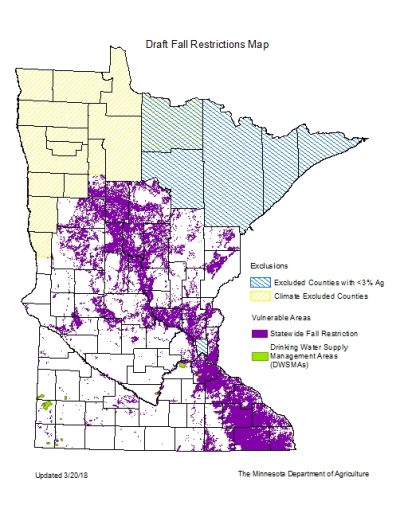 In addition, proposed changes to the Rural Finance Authority’s Loan Program “would have better served farmers by expanding the loan programs to farmers experiencing disaster and emergency; loan limits for the livestock expansion and farm opportunity loans; and use of loan programs for methane digesters,” Dayton said.

The Minnesota Soybean Growers Association said in a news release that commodity groups were uniformly in favor of the ag policy bill, and noted that it would have “adjusted the minimum eligibility threshold for the Bioincentive Program (and) updated regulations to help establish and grow value-added aquaculture production.”

The nitrogen fertilizer proposal would prohibit application of nitrogen in the fall or on frozen soils, in those areas of the state with “vulnerable groundwater or (Drinking Water Supply Management Areas) that that are at or exceed 5.4 mg/L nitrate-nitrogen,” the state said in a FAQ on the rule. “An area with vulnerable groundwater is an area where nitrate can move easily through soil and into groundwater.” Such areas include land with coarse textured soils, karst geology, or shallow bedrock.