EPA's Pruitt gets an earful, defends himself at Kansas ethanol plant

EPA Administrator Scott Pruitt visited a Kansas ethanol plant Tuesday, where he sought to defend himself against accusations of undermining the Renewable Fuel Standard from farmers who made no secret about being “mad as hell” at him.

Pruitt stopped at East Kansas Agri-Energy in Garnett, where he met with a handful of biofuel supporters to discuss EPA issues, primarily his management of the RFS. Toward the beginning of the meeting, Kansas farmer Dennis McNinch didn’t pull any punches in a comment directed at Pruitt.

“I along with my fellow farmers are fed up with the fake news that your oil cronies have generated since the inception of the RFS, and quite frankly, we’re mad as hell at you,” McNinch, who chairs the Kansas Corn Commission, told Pruitt.

“In our state, a man’s word and a handshake are golden,” he added, noting that the same values also hold true in Pruitt’s home state of Oklahoma. “I challenge you to stand by your word and abide by the laws of the RFS.” 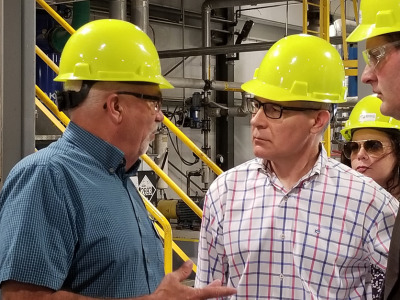 For his part, Pruitt said that comment was “candidly unfair.” He defended his actions in governing the biofuel mandate, including the agency’s work to issue small refinery exemptions – waivers issued to refineries based on claims of economic hardship.

Pruitt was also criticized for the inclusion of language in a biofuels deal that was rejected last week by President Donald Trump. That language, Pruitt said, would make the idea of allowing the ethanol industry's request for summer E15 sales more palatable for the oil industry.

“If you do those in isolation, the groups that are against it are going to come and sue,” Pruitt said, adding that those two provisions were combined with a transparency measure in the market for Renewable Identification Numbers – the credits used to measure RFS compliance – “together to try to mitigate against litigation.”

Pruitt also offered remarks that would be welcomed by many in the biofuels sector: that he believes EPA has the statutory authority to issue the RVP waiver administratively and that he wants to see hardship waivers issued before the annual Renewable Volume Obligation announcement every November.

On the latter point, the EPA has faced criticism for issuing retroactive waivers that exempt small refineries claiming economic hardship from the compliance requirements of the RFS. Pruitt said he “inherited” the structure that issued waivers after the RVOs had already been set, and he wants to change the administrative policy to handle those exemptions prior to the RVO release.

“I think that’s the right thing to do so that if any exemption occurs in the future, that would be reallocated in the RVO on a prospective basis,” Pruitt said.

Those RVOs are required by law to be released by the end of November, something Pruitt pointed out the Obama administration failed to do. He said the 2019 RVO proposal will be released next week, and pro-ethanol voices like those who were in the room on Tuesday “are going to like the numbers.”

Pruitt also said something Tuesday that he reportedly said at the White House during administrative deliberations on how to break the biofuel stalemate: that the agency has the authority to issue the Reid Vapor Pressure waiver that would allow for summer E15 sales. What’s more, Pruitt said the agency not only has that authority, but should exercise it.

“I’m for the RVP. I believe it should be done 12 months a year,” Pruitt said. “It’s my belief that the statute permits it, and it’s something that we should embrace.” 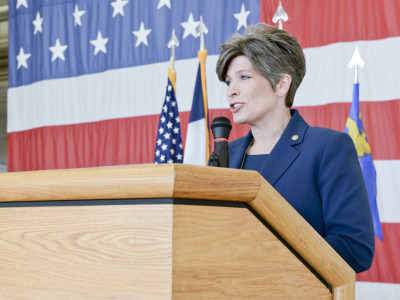 That echoes what Pruitt is said to have told President Trump about the EPA’s authority to issue the RVP waiver at a series of White House meetings on the RFS. Sen. Joni Ernst, an Iowa Republican who, along with fellow Iowa Sen. Chuck Grassley, attended many of those meetings, said she still wants the administration to work on E15 year round, and she plans to work with the Department of Agriculture and Secretary Sonny Perdue to get her point across.

Despite Pruitt’s statement at the meetings that he has the authority to administratively issue the RVP waiver, Ernst tells Agri-Pulse she doesn’t think “he has the will.”

“The president has told him: E15 year round,” Ernst said last week after Trump rejected the deal. “He hasn’t done it yet, so my message to the president is that Administrator Pruitt is not following through with what you’ve directed.”

While many of Pruitt’s comments in Kansas were generally well-received - including a discussion on prescribed burns for rangeland management, dicamba and the waters of the U.S. (WOTUS) rule, the ethanol industry is still skeptical. Brooke Coleman, director of the Advanced Biofuels Business Council, said that loss of confidence in Pruitt among the industry reverberates from the corn field to Capitol Hill.

“I think that at this point, Scott Pruitt no longer gets the benefit of the doubt,” Coleman said. “I don’t think it’s as important that I feel that way as it is that our champions in Congress feel that way.”

Kansas Corn Growers Association President Ken McCauley said his organization's concern was that Pruitt "thought he could come to Kansas, take a few photos with smiling farmers and tell the President that corn farmers are okay with his actions,” said Kansas Corn Growers Association President Ken McCauley. “That would be a gross misinterpretation of what happened here today. I told him that EPA’s attacks on ethanol don’t just hurt plants like EKAE, they hurt farmers, rural communities and American consumers who benefit from ethanol with lower prices and cleaner air.”

For his part, Pruitt tweeted an upbeat ending to his Kansas tour: "Just finished up a candid & productive discussion with Kansas corn and grain sorghum farmers on #RFS. I strongly believe the most effective way to make decisions is to hear directly from stakeholders. The Trump Administration is committed to standing up for the American farmer."