Most of the time Squirrel is running around, playing fetch, and living like your average young dog. What makes the rescued Labrador mix special is the job he’s being trained for.

Squirrel is one of four dogs being trained in a government program to sniff out the presence of avian flu in the feces and carcasses of waterfowl and other birds. If the training proves successful, the dogs could be useful in winnowing out uninfected samples among thousands collected every year in the effort to get an early start in preventing bird flu outbreaks. Outbreaks of highly pathogenic avian flu in 2014-2015 resulted in the deaths of millions of chickens and turkeys on commercial farms.

“If the research proves to be successful, then we’re going to end up working with the USDA AHPIS Wildlife Services and the National Wildlife Disease Program to test the dogs in the field and bring them into environments that are real-world type settings,” Golden said in an interview. That would include wetlands and agricultural environments.

The dogs, which were chosen for their “high arousal and high prey drives,” are currently being trained to detect odors such as cinnamon, and will soon be asked to discriminate between cinnamon and other odors including licorice and banana. The next step will be doing smelling exercises in the field, and after that, the dogs will be introduced to fecal samples from infected and non-infected ducks.

At this point, Golden said, the dogs are “doing very well” in alerting to the different stimulants.

USDA proposal to move NIFA out of DC generates opposition
Farmers look to bird-drones, lasers to scare pests away

Bruce Kimball, research chemist and study collaborator with NWRC, said the project originated a decade ago with work that was being done at the Monell Chemical Senses Center in Philadelphia as part of a larger study into how disease or inflammation may cause odor change in infected animals.

“There was a point about eight or nine years ago where the question really arose: Could we apply this specifically to avian influenza?” Kimball said. “That was because the USDA National Wildlife Research Center surveillance program was collecting tens of thousands of samples each year from waterfowl, and in general, 80 or 90 percent of those samples were from animals who were not infected with avian influenza, yet each of those samples cost about $50 apiece for analysis. So the question was, could we find a more efficient way, and a cheaper way, to screen samples for avian influenza?”

Kimball said they started training mice to detect certain odors, and then moved on to training ferrets. 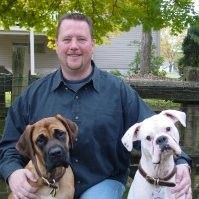 “That’s when Glen (Golden) came into the picture, and when it was successfully demonstrated that ferrets could discriminate between infected and healthy birds based on their fecal odors, it really became obvious that this could work its way into a real program using canine detectors.”

Although dogs are not susceptible to avian influenza, Squirrel and his canine colleagues – Odin, Moose and Custer – are vaccinated for rabies and other diseases they may be inadvertently exposed to while in the field. Once the dogs have completed their training, they will be paired with an APHIS Wildlife Services field specialist for disease surveillance activities or, if found unsuited for surveillance work, placed in an adoptive home.