The passage of the House and Senate farm bills over two weeks and the overwhelming, bipartisan margin of support for the Senate measure is providing new optimism that Congress can agree on a final version that President Donald Trump will sign this fall.

“I don’t see any reason why we can’t get it done” before the 2014 farm bill expires Sept. 30, House Agriculture Chairman Mike Conaway, R-Texas, told Agri-Pulse.

He said he hopes to begin preliminary discussions at the staff level even before the House and Senate formally agree to send the bills to a conference committee and appoint the conferees. That can’t happen until after Congress returns from the week-long July 4 recess.

House Agriculture’s ranking Democrat, Collin Peterson of Minnesota, is much more optimistic of a bill being enacted this year than he was this spring when he was telling reporters that the House GOP’s insistence on using the farm bill to enact tougher work requirements for food stamp recipients was making a short-term extension of the 2014 farm bill increasingly likely.

He insisted last week that it's possible to finish the negotiations by August. “It wouldn't take more than a day or two to conference this. We could do it. I’m for getting it done.”

But completing a final version before August, when the House is slated to start a month-long recess, or even October, as is Conaway’s goal, would be historically fast by the standard of recent farm bill negotiations.

The Senate and House passed their versions of what became the 2014 farm bill in June and July of 2013, respectively, yet the conference report wasn’t completed until the end of January 2014.

The bills that became the 2008 farm bill passed the House in July 2007 and the Senate the following December. The conference report wasn’t finished until May 2008. Negotiations on the 2002 farm bill wrapped up more quickly but they took 2 1/2 months, from February through April, to complete.

Still, farm bill veterans see reason to hope the negotiations could be completed relatively quickly, in part because both Trump and lawmakers appear to see a benefit in enacting a bill ahead of the mid-term congressional elections.

“The pressure is growing. That did contribute to the movement” of the bills in the House and Senate, said Rob Larew, vice president of public policy and communications for the National Farmers Union and a former top aide to Peterson.

Dale Moore, vice president of public policy for the American Farm Bureau Federation, said that "on both sides of the Hill, from the committees, obviously, and certainly from leadership, there's a sense of urgency to get a farm bill done."

On paper, the toughest issue for the negotiators to resolve is the nutrition title, given the House GOP’s expanded work requirements for the Supplemental Nutrition Assistance Program. However, the White House notably failed to threaten to veto the Senate bill for lacking tougher SNAP work rules.

Peterson said that was because the White House is eager to see a new farm bill enacted. “I think they want a bill,” he said. “The Senate was not going to be able to pass a bill with work requirements.” 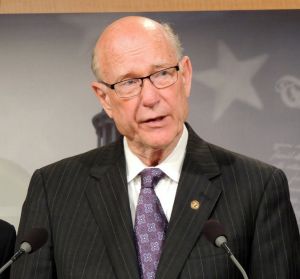 Conaway indicated that he is not giving up on strengthening SNAP work requirements and emphasized that the president has talked about the importance of doing that.

“I’m going to do what I need to do based on good sound law. He’s got a broader narrative going on with lots of other things happening,” Conaway said, referring to the lack of a White House veto threat on the Senate bill.

Heading into the negotiations, leaders of the Senate Agriculture Committee are highlighting the historically large margin, 86-11, by which their bill was approved. That is the largest margin that a farm bill has passed the Senate since 1973. The second-largest margin in that period, 72-14, occurred in 2007. The House bill passed 213-211 in June with no Democratic support.

The Senate bill “really weaves a balance on all the various needs of 12 titles of a farm bill. I hope the House will look very closely at the broad support and coalition that we have,” said Debbie Stabenow of Michigan, the Senate Ag Committee's ranking Democrat.

Senate Agriculture Chairman Pat Roberts, R-Kan., said the final margin on the bill could have been larger if he had done a better job of selling his colleagues on the provisions in the bill to cut down on waste, fraud and abuse in SNAP.

“If you look at what we did without the backdrop of what the House did, it is terribly significant and it’s right on the money of getting integrity into the program,” Roberts said.

Roberts noted that the two GOP sponsors of an amendment to toughen work requirements in the Senate bill, Ted Cruz of Texas and John Kennedy of Louisiana, ultimately voted for the bill even though their amendment was soundly defeated, 30-68.

The SNAP issue aside, the House and Senate negotiators still have a range of tough issues to sort out, including sharp differences on conservation programs, funding for research and energy programs, regulatory relief provisions, and commodity program eligibility rules.

Conaway declined to take a position on some aspects of the Senate bill, including on the offsets that Roberts and Stabenow used to pay for funding expiring programs. The Senate bill relies heavily on tapping an escrow account used by rural electric cooperatives. The bill would prohibit new deposits and reduce the interest rate, currently 5 percent, on existing electric co-op deposits, which are used to repay USDA loans.

But Conaway made clear that he will fight provisions inserted in the Senate bill by Sen. Chuck Grassley, R-Iowa, to tighten requirements for qualifying for commodity program payments as a farm manager. Conaway says the downturn in the farm economy make it a bad time to tighten eligibility rules.

“Maybe that conversation was better in 2014, but it’s clearly not appropriate in 2018 because the circumstances are so much different in rural America and in production agriculture’s finances,” Conaway said.

The House bill would liberalize rules for members of partnerships and S corporations and would expand the number of extended family members who could qualify for payments.