Chesapeake Bay: Progress on nutrients, but a long way to go

The health of the Chesapeake Bay, the largest estuary in the United States, is steadily improving, a strong indication that the six-state-plus-Washington, D.C. effort known as the Chesapeake Bay TMDL is working to reduce pollutants in the Bay watershed.

TMDL stands for Total Maximum Daily Load, and the EPA-imposed program for the Bay is the largest such program in the country. Established by EPA in 2010, it requires the jurisdictions to cut the amount of nitrogen and phosphorus flowing into the bay by about 25 percent by 2025 – based on 2009 levels.

The “pollution diet” is working well enough that the University of Maryland Center for Environmental Science recently said that for the first time, “the positive trajectory that was reported in recent years is now statistically significant.” UMCES, which began issuing an annual report card 12 years ago, gave the estuary a C for 2017, including an A+ for fish populations.

Although a C may not sound great, it is a passing grade, and UMCES said the fact that Bay health scores have consistently been in the “high C” range since 2015 are “evidence that … restoration efforts are having an impact on improving conditions.”

Another indication that reduced discharges of nitrogen, phosphorus and other pollutants are combining to improve the bay’s health is the return of underwater grasses. UMCES cited a March 2018 paper showing that those reductions “have led to the largest resurgence of underwater grasses ever recorded anywhere.”

But at the midpoint of the 15-year effort, there’s still a lot to be done. Forty percent of the nitrogen goal was met by the end of last year. Agriculture will play a huge rule in achieving the remaining 60 percent, especially in Pennsylvania, which is way behind in meeting EPA’s goals. That state, and the six other jurisdictions within the watershed – Maryland, Virginia, Delaware, West Virginia, New York and the District of Columbia – must present their goals to EPA for Phase 3 of the TMDL by April 2019.

“We are making great progress in Pennsylvania, but it’s not keeping pace with what the blueprint requires,” said Bill Chain, Pennsylvania state director of the Chesapeake Bay Foundation, using a descriptor for the 2010 TMDL. EPA says that between 1985 and 2017, Pennsylvania reduced its loadings of nitrogen entering the Bay by 14 million pounds. But in order to meet the TMDL’s 2025 goal, the commonwealth must cut the amount of nitrogen by 35 million pounds in the next seven years.

Data from the Bay program show that from 2010 through the end of 2017, “Pennsylvania only achieved 18 percent of its nitrogen reduction goal – leaving 82 percent to be achieved between now and 2025,” the Bay Journal reported. “Put another way: In less than eight years, the state would have to reduce 2.5 times as much nitrogen as it has in the last 32 years.” 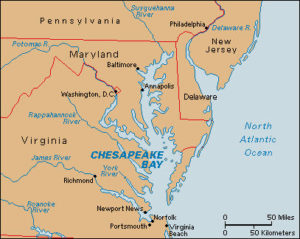 EPA was tough on Pennsylvania in a recent assessment that laid out the agency’s expectations for Phase 3 of the TMDL, saying the commonwealth had consistently not addressed issues including implementation of best management practices; targeting of areas with the greatest nutrient reduction potential; and ensuring ag operations are managing manure correctly.

Pennsylvania is “significantly off track” in meeting water quality goals, EPA said, noting it had “updated” its expectations. “Pennsylvania’s accelerated progress is critical to the achievement of water quality standards in the Chesapeake Bay,” EPA said.

About half of the Bay’s fresh water comes from the Susquehanna River. But that 464-mile body of water that cuts through New York, Pennsylvania, and Maryland also provides about half the nitrogen and a quarter of the phosphorus.

The commonwealth is trying to bring its program up to speed, according to participants in the process.

“Pennsylvania’s doing a much better job than previously,” says John Bell, counsel with the Pennsylvania Farm Bureau. Bell is a member of an Agriculture Workgroup that recently presented preliminary recommendations to the steering committee responsible for developing the state’s Watershed Implementation Plan (WIP).

“We’re trying to get more specific and more local,” Bell said. “We are reaching out to gain better insight from those folks who will be responsible for carrying out the plan – from agriculture, municipalities, to local groups.”

The agriculture workgroup’s recommendations, which were presented to but not acted upon by the steering committee July 10, include significantly increased nutrient planning on land that receives manure; implementation of proper runoff controls at concentrated animal feeding operations; and increased use of practices to improve soil health, including expanded use of cover crops.

CBF’s Chain said his organization is involved in the Keystone 10 Million Trees Partnership, which wants to plant that number of trees in “priority landscapes” by 2025.

“Tree-lined streams are huge” in preventing nutrients from entering local waterways, Chain said. The ag workgroup recommends increases of 25 percent in forested buffers on ag lands, and a 15 percent increase in grassed buffers.

The report also discourages imposition of legal requirements on landowners, instead recommending that they receive “adequate compensation for those portions of their lands that become restricted in use as a result of implementation of a (best management practice) performed pursuant to" phase three of the state's watershed implementation plan. The report further suggests such portions of land "be fully excluded from property and related taxes for the life of that BMP practice.”

But looming over the entire process in Pennsylvania is the question of resources. The total projected cost of all the measures in the ag workgroup report is nearly $327 million. Yet “there has been virtually no evaluation of the likelihood that projected costs of enhanced practices recommended in this preliminary report can feasibly be financed through existing sources of public and private funding.”

The biggest ticket item in the ag report is for “enhanced manure storage development,” which the group estimates would cost about $200 million.

As far as where that money will come from, Bell commented, “It’s fairly difficult to predict what our legislature is going to do.”

He would also like to see more flexibility from EPA on the 2025 deadline. “I think 2025 is just an overly aggressive timeline for Pennsylvania to meet,” he said.

EPA can expand federal jurisdiction in the state if Pennsylvania cannot meet its goals, such as by requiring more reductions from industrial sources or withholding funding.

The challenges will become more difficult in the years ahead, since much of the reduction thus far in nutrients entering the Bay can be attributed to wastewater treatment plant upgrades and improved air quality.

Ticking off accomplishments in the watershed, Bill Dennison, a marine scientist at UMCES, says, “We can really be proud. We’ve reduced (nitrogen oxides) from auto exhaust and power plants. We have the largest advanced water treatment facility in the world” – the Blue Plains Advanced Wastewater Treatment Plant (in Washington, D.C.).

“We’ve proven ourselves that we can do it,” he says. “We haven’t done that yet for the ag sector but we can do it. This is a place where we can showcase restoration.”