Syngenta is planning to establish its Global and North American Seeds office in the western suburbs of Chicago, relocating about 50 employees there from other U.S. locations.

The Switzerland-based company says it will begin transplanting its workers in the first half of 2019 as it reinforces its commitment to the seeds business.

Syngenta aims to strengthen seeds, help ag ‘bridge’ to China
Washington Week Ahead: Biden set to take office with flurry of actions
"The U.S. is the most important seeds market in the world, and we believe the addition of a Chicago office positions us well to support our long-term growth strategy," said Jeff Rowe, Syngenta president of global seeds, North America and China (pictured above). He said the Chicago office will not only bring Syngenta closer to its U.S.corn- and soy-growing customers, but also places the company in proximity to "an incredible talent pool for world-leading digital and tech innovation, and readily connects us to other key seeds markets globally through an excellent transportation hub."
Company leaders in Seeds marketing, sales and administrative functions will work together in the new Chicago office toward the goal of growing Syngenta's global and North America business. It's a move that David Hollinrake, president of Syngenta Seeds and North America Region director, said will enable the company to "develop more solutions for a market demanding innovation and choice."
Illinois Gov. Bruce Rauner welcomed Syngenta's plan, which he said enhances the state's "reputation as a leading innovation center for agriculture." He added that the state was "eager to supply talent and business resources that will help them grow." 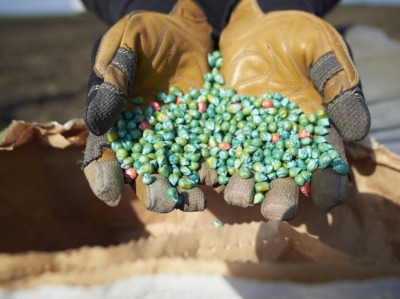 "Agriculture is vitally important to the economy of Illinois and the entire Midwest," Illinois Farm Bureau President Richard Guebert Jr. said. "For a major agricultural technology business like Syngenta to open a key office in our state is excellent news for our farmers and the agricultural sector."
The company made a commitment to expand its seed portfolio in July 2017 after its acquisition by ChemChina. Syngenta says that since then it has worked steadily toward its goal of gaining ground in the seeds market, introducing 13 new soybean varieties in August and announcing a plan to triple its staff working on its NK seeds brand by year's end.
Syngenta currently operates four facilities in Illinois, with more than 150 full-time employees and a $16 million payroll. A seed conditioning center in Pekin, Ill., was established in 1911 and celebrated a century of continual operation seven years ago.