An 18-year-old debate over whether farmer cooperatives should be allowed to share crop insurance profits with their members has flared up behind closed doors as negotiators try to finish a new farm bill.

At issue is a decision by USDA’s Risk Management Agency (RMA), later overturned by a federal appeals court, that would have stopped Sunrise Cooperative of Ohio from continuing to provide patronage payments to members who buy crop insurance through the co-op, which owns one-third of Lund and Smith Insurance Service.

House Agriculture Chairman Mike Conaway, R-Texas, is now seeking to use the farm bill to negate that court decision, a move supported by the lobbying firm of Combest Sell Associates, which was founded by former committee Chairman Larry Combest, R-Texas, and a former top aide, Tom Sell. Their clients include the Crop Insurance Professionals Association (CIPA), which argues that the patronage payments amount to rebates that give co-ops such as Sunrise an unfair advantage.

In the grand scheme of the negotiations, the dispute pales in comparison to the struggle between Conaway and the lead Senate Democratic negotiator, Debbie Stabenow, over tightening work requirements for food stamp recipients, a priority for Conaway. But sources say the co-op provision is the lone significant dispute preventing negotiators from closing out the new bill’s crop insurance title. 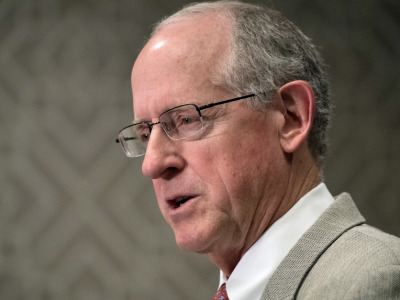 The Sunrise dispute has its roots in a debate over whether insurance companies should be allowed to provide rebates to farmer customers. Under federal law, crop insurance companies are barred from offering rebates, with the exception of a few co-ops that have been allowed to make them in the form of patronage.

The Agriculture Risk Protection Act of 2000, which significantly increased federal subsidies for crop insurance, included a provision to encourage co-ops to expand the market for the policies by allowing patronage payments on the revenue. Sunrise was one of the co-ops that took advantage of the new authority.

Lawmakers had second thoughts about the patronage and included a provision in the 2008 farm bill that abolished the patronage authority for all but a handful of co-ops that had been using it between 2005 and 2007, including Sunrise.

All was well and good for Sunrise until it acquired a second co-op, called Trupointe, which operated in Ohio and Indiana and wasn’t grandfathered out of the patronage ban enacted in 2008.

In May 2016, under the Obama administration, RMA denied Sunrise the right to continue making the payments, saying that it was no longer the same entity as the one that had qualified for the grandfather clause in the 2008 farm bill.

A federal judge agreed with RMA, but the 6th U.S. Circuit Court of Appeals this June reversed that lower court decision, ruling that RMA was wrong in stripping Sunrise of its exemption from the patronage ban. The appeals court said that RMA wrongly imposed additional conditions on co-ops to maintain the exemption, including that they retain "the same structure and relative size."

"When Congress speaks clearly, administrative agencies must listen. Congress spoke clearly in the 2008 farm bill when it said 'an entity that was approved' to provide rebates to its members may continue to do so 'in a manner consistent with the payment plan approved,'" according to the ruling.

The patronage payments are limited to farmers who are members of Sunrise, operate in Ohio or Michigan, two states that allow insurance rebates, and also buy crop insurance from Lund and Smith.

Secor told Agri-Pulse he first learned in late October from a legal adviser and aides to Stabenow, D-Mich. that Conaway was seeking to block the 6th Circuit decision. Stabenow is a critical potential ally for Sunrise since the co-op has members in Michigan.

Secor said he was told the dispute will have to be settled directly by the four lead negotiators: Conaway, Stabenow, Senate Agriculture Chairman Pat Roberts, R-Kan., and the House Agriculture Committee’s ranking Democrat, Collin Peterson of Minnesota.

In a statement, Sell said “CIPA has long stood for the bedrock principle of crop insurance that it should be available to all producers at published rates and prices ... We stand for a level playing field where competition for the farmers' business is based on quality of service. Crop insurance should be available to all farmers — small, big, connected, independent, rich, poor or otherwise — at published prices regardless of who they choose to do business with.”

The RMA website lists 16 cooperatives, including Sunrise, that are currently allowed to make patronage payments. Most are in California and include the California Grape and Tree Fruit League, Nisei Farmers League and Allied Grape Growers. Other co-ops operate in South Carolina, Georgia and Florida.