As we reflect on an incredibly busy 2018, there was certainly no shortage of people or topics to write about. From President Donald Trump – whom we interviewed twice – to the ongoing trade wars, a new farm bill, regulatory reform and much more, our editorial team scrambled to keep you informed on a daily basis. And you responded in kind, clicking on about 600,000 more pages than the prior year.

So, what were some of the top stories in terms of page views on www.Agri-Pulse.com? Some of the overall winners might surprise you.

For example, the news that President Donald Trump would address members of the National FFA Organization at the group’s annual convention in Indianapolis attracted more than 37,000 views, the most by far of any article on Agri-Pulse’s website in 2018. Trump was the first president to address the convention since George H.W.  Bush in 1991, though First Lady Michelle Obama did address FFA members with a pre-recorded message in 2015, as did Vice President Mike Pence in 2017.

In his remarks, which occurred the same day as the deadly shooting at a Pittsburgh synagogue, Trump invited a pastor and a rabbi on stage to offer prayers. He also praised FFA and said he “would like to be a future farmer” and told the crowd, “If I can fly on Air Force One, then you can be a really, really successful farmer.” Sara Wyant and Spencer Chase wrote the preview story.

Second on our list was an Aug. 28 story about the discovery that a cow in Florida was infected with bovine spongiform encephalopathy (BSE), more commonly known as mad cow disease. The BSE was “atypical” in that it developed randomly. It was the first detection of the disease in the U.S. since July 2017, when BSE was found in a 11-year-old cow in Alabama. In both cases, the animals were not slaughtered and no meat entered the food chain.

Not surprisingly for a year in which the farm bill dominated conversations throughout the ag industry, our story about Agriculture Secretary Sonny Perdue’s recommendation that President Trump sign the farm bill garnered a healthy number of web hits, too. Perdue made the recommendation even though the bill did not tighten work requirements for recipients of Supplemental Nutrition Assistance Program payments. Following the bill’s passage, the administration swiftly proposed tightening the rules for when states could waive work requirements for recipients.

Checking in at number four on our Top 10 list was an edition of our weekly feature, “Washington Week Ahead,” which carried updates on two items of longstanding importance to readers – the farm bill and “waters of the U.S.” Philip Brasher reported Dec. 9 that congressional lawmakers were planning to release the text of the farm legislation, and that the Environmental Protection Agency and Army Corps of Engineers would be proposing a new version of WOTUS removing ephemeral streams and many wetlands from federal jurisdiction. 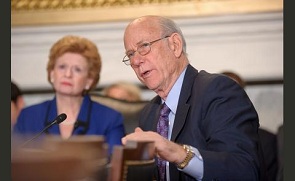 A “massive trade aid package” to ameliorate the effects of tariffs on U.S. farm goods was the subject of a story by Sara Wyant and Bill Tomson on Aug. 21. Wyant and Tomson reported the overall figure – $12 billion – and the payment rates for soybean farmers ($1.65/bushel) and corn growers (a penny per bushel). USDA would not confirm the accuracy of the figures, but the article, the sixth most popular of 2018, was correct. USDA later reported that those payments would be made in two parts. Soybean farmers were happy, corn growers were not.

Another trade-related story came in at number seven on our list. The Dec. 1 article, which got 6,041 hits, is about how Chinese President Xi Jinping told President Trump at a meeting at the G20 in Buenos Aires that China would buy more U.S. agricultural goods. The White House announcement lacked details, but China did renew soybean purchases in December with three orders totaling 2.63 million tons. Though the sales fell far short of 2017’s total of 32 million tons, they were nonetheless welcomed by U.S. producers.

Another farm bill story was number eight on the list. In his Dec. 10 piece, Philip Brasher explained how the compromise bill would “allow a one-time chance in 2020 for producers who have experienced serious yield losses in past years to update their yield data used to calculate Price Loss Coverage benefits.” The bill also overhauled dairy producers’ Margin Protection Program and renamed it Dairy Margin Coverage to make it more attractive to smaller-scale producers and increased funding for conservation programs, while omitting tighter work requirements for the Supplemental Nutrition Assistance Program and broader new forest management authority for federal lands.

Two more farm bill stories rounded out the top 10. In one published Nov. 16 (actually number 10 in our standings), negotiators were said to be “struggling to work out deals on forestry regulations, commodity program eligibility rules and other issues with a goal of finalizing an agreement that Congress can vote on before adjourning in December.” In the other piece, published Nov. 28, negotiators said they had reached a tentative agreement on outstanding issues pending final scores from the Congressional Budget Office.

Farm bill negotiators struggle with forestry, other issues as they seek deal