US car tariffs threaten to add to ag retaliation woes

Retaliation from around the world to U.S. steel and aluminum tariffs is still hitting farmers and ranchers here hard, but the pain could get a lot worse if President Donald Trump follows through with threats to impose new import taxes on cars and car parts.

The U.S., after declaring last year that its roughly $35 billion worth of steel and aluminum imports were a national security threat and levying tariffs, is now contemplating doing the same thing on a grander scale with automobiles.

The current retaliatory tariffs to the U.S. taxes on metals imports are still taking a major chunk out of U.S. pork, potatoes, almonds, apples, oranges and cheese exports. That pain is expected to expand exponentially if the Trump administration slaps tariffs on $350 billion worth of car and car part imports.

“The point is that (the retaliation) would affect everything because the numbers are so big,” a European Union trade official told Agri-Pulse.

U.S. farmers and ranchers are always some of the first to suffer in trade wars. They’ve lost billions of dollars in foreign sales since the U.S. began hitting customer nations with tariffs last year.

Six of the top car and car parts exporters to the U.S. are also the top six markets for U.S. ag exports: Japan, the EU, South Korea, China, Canada and Mexico, according to government trade data.

“That’s $331 billion of imports that could be affected by (new 232 tariffs),” said one U.S. government trade official preparing for the possibility of an expansion of the trade conflicts. “Those top six accounted for 64 percent of our total ag exports.”

While Japan — the home of Subaru and Mazda and a major importer of U.S. beef, pork, potatoes and wheat — did not retaliate against the U.S. steel and aluminum tariffs, the country is eager to avoid potential car taxes. Prime Minister Shinzo Abe only agreed last year to talks for a bilateral free trade agreement after Trump threatened auto tariffs.

“I said, ‘You don’t have to negotiate, but we’re going to put a very, very substantial tax on your cars if you don’t,’ ” the Japan Times quoted Trump saying.

Canada and Mexico might be able to avoid the car taxes. Both countries were given large quotas in side letters to the newly renegotiated North American free trade pact with the U.S., but that’s not a certainty, said one U.S. trade official. None of the three countries have yet ratified the pact.

Ironically, it is the fact that the Trump administration has not lifted the current 232 tariffs on Canada and Mexico that has the country’s legislatures balking at approving the pact.

Mexico was the first to hit back last year on the U.S. steel and aluminum taxes, and its retaliatory tariffs have cut especially deep.

The EU is standing firm that the U.S. has no right to impose car tariffs on its 28 countries, but the trading bloc is also preparing for the worse.

“We don’t consider that this is any way justified,” said David O’Sullivan, head of the EU delegation to the U.S., before he retired last month. “We don’t believe that under any objective analysis you can conclude that European cars and car parts … pose a threat to national security. We didn’t believe that for steel and aluminum. We continue not to believe it in the slightest for cars and car parts.” 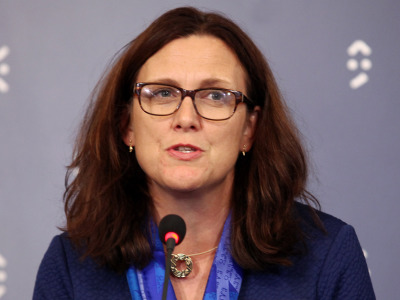 EU Trade Commissioner Cecilia Malmström is scheduled to meet Wednesday with U.S. Trade Representative Robert Lighthizer. While they will be discussing a free trade agreement, a European Commission spokesman said, Malmström has also come to Washington to reinforce “the consequences” if the Trump administration hits the EU with the new tariffs.

The European Union has already devised a new list of U.S. products to retaliate against if the Trump administration puts new “Section 232” tariffs on imports of Mercedes Benzes and other cars. It hasn’t been published yet, but one EU trade official tells Agri-Pulse that new tariffs on soybeans, nuts and fruit are likely to be included.

The entire issue of the EU’s response to auto tariffs could be moot if Malmström and Lighthizer agree that trade talks are in good shape. Both sides are still technically in a trade dispute. The EU is currently charging import taxes on about $3.3 billion worth of U.S. goods, including orange juice, cranberries, corn and rice in retaliation for U.S. tariffs on steel and aluminum. But they have agreed that so long as they remain engaged in talks for an FTA, the EU will be exempt from the potential auto tariffs.

That’s still the case in the view of European trade officials, but not for U.S. officials. The U.S. is still insisting that agriculture issues be included in the trade talks, but EU officials are equally adamant that they be left out and neither side has shown any sign of backing down.

O’Sullivan told reporters that the word “agriculture” was intentionally left out when President Donald Trump and European Commission President Jean-Claude Juncker signed an agreement to begin the talks last summer.

While it’s true that the word “agriculture” is indeed absent from the document, U.S. Ambassador to the European Union Gordon Sondland told Politico in a recent interview that should not matter.

Ag Secretary Sonny Perdue recently said the U.S. could use the threat of new auto tariffs to force the EU to agree to negotiate ag issues.

O’Sullivan said that would be a mistake: “That’s clear. If there were to be the unilateral imposition of new tariffs on autos, the talks would be ended.”