Home » Beagles and biting: An inside look at ASF prevention and detection
News Innovation

Beagles and biting: An inside look at ASF prevention and detection

A bright-eyed, energetic four-year-old is serving as America’s first line of defense against a disease threatening to cripple U.S. pork production.

The four-year-old in this case is Beasley, a beagle patrolling the international arrivals terminal of Dulles International Airport outside Washington. Beasley and his comrades at other ports of entry use their highly sensitive snouts to look for everything from “apples, oranges, bananas, sausages, ham and even seeds for planting,” says Jennifer Jones, an agriculture officer with U.S. Customs and Border Protection.

Agri-Pulse recently visited Beasley on the job and spoke with other government officials to gain an inside look at the efforts to prevent and detect African Swine Fever, a fatal disease ripping through European and Asian pork production.

Beasley is part of the “Beagle Brigade,” which was formed by USDA at the Los Angeles International Airport in 1984. Beagles are preferred because of their “keen sense of smell, high food drive and non-threatening size,” according to CBP’s website. All dogs are adopted from rescue shelters or through private donations.

Earlier this month, USDA increased prevention efforts for ASF by adding more beagle detection teams at Chicago and Atlanta airports. Dulles currently has two beagles but will be getting a third one in a few months.

CBP officers and beagles randomly screen international passengers coming through primary inspection at ports of entry. The dog paws or sits near a bag to indicate the presence of an agricultural product. If officers feel a person has a prohibited commodity, officers refer the passenger to secondary inspection, where agriculture specialists are located. Since 2015, beagles have seized agricultural goods from an average of more than 137,000 travelers per year.

From there, agriculture officers take over and “x-ray all of their bags, and if we identify anything such as pork products or anything like that, we will seize it and destroy it,” Customs and Border Protection Agriculture Supervisor Josue Ledezma told Agri-Pulse. If a passenger does not declare a product, Ledezma said they could face potential penalties ranging anywhere from $300 to $1,000 or higher. 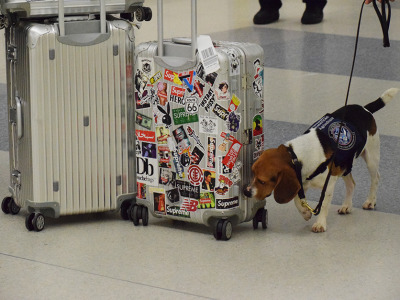 Beasely searches the luggage of an international arrival at Dulles Airport.

“Our main responsibility is to protect America’s agriculture ... we’re very passionate about what we do, and we just want to make sure everyone is safe,” Ledezma said.

Paul Sundberg, executive director of the Swine Health Information Center, said stopping the disease from entering the United States falls heavily on the shoulders of CBP officers and their parade of pups, and “we’re encouraging them to up their game and make it hard as possible.”

Because ultimately, preventing ASF entry will be more than a temporary effort.

“ASF circulating around the world is not a short-term deal,” Sundberg said. “It is a very long-term issue.”

Try as they might, the beagles can provide only a limited defense against the disease. They can detect food products that might harbor the virus but they can’t sniff out the virus itself, which could be carried on the travelers’ clothing or shoes.

Like many other long-term issues, industry officials hope speedy detection of any potential outbreak would minimize the economic and animal welfare harm of the disease.

Aside from the CBP’s beagles, USDA officials are also plotting out a two-pronged approach to beef up observation and detection of the disease should it make its way onto U.S. shores.

On one track, the USDA surveillance program would tell farmers when ASF is first present on their operations. On the second, a standard “oral fluid detection system” will be employed if the virus ever takes hold in the U.S. and farmers need to show that their swine are disease-free.

The first step in any surveillance program employed by USDA will depend on veterinary laboratories testing samples from pigs that show symptoms of ASF, a task complicated by the fact those symptoms are often the same or similar to other diseases like porcine reproductive and respiratory syndrome (PRRS) and salmonellosis, Sundberg said.

“The symptoms of those other diseases can be confused with the symptoms of ASF,” he told Agri-Pulse. “That’s why we need to make sure that if we think we’re dealing with PRRS that killed a pig, it wasn’t in fact ASF.”

USDA has already been certifying that veterinary labs in the U.S. are proficient in using the test for ASF, but the labs haven’t been cleared yet to start conducting them, Sundberg said.

“That’s part of the surveillance program,” he said. “That’s what we’re waiting for.”

Meanwhile, USDA’s Animal and Plant Health Inspection Service, the National Pork Board, and the Swine Health Information Center are jointly funding a detection system that can be used if there is an ASF outbreak, U.S. government and pork industry representatives tell Agri-Pulse. 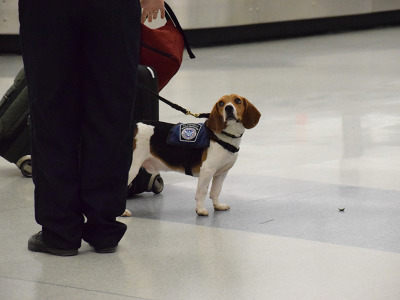 Oral fluid detection systems are already routinely used for collecting and analyzing other samples to detect other diseases on farms in the U.S. Essentially, the farmer hangs a ropelike receptacle in the pens and pigs will gnaw on it, leaving behind saliva that can be collected and then tested for any presence of the virus.

APHIS is now analyzing the ASF samples needed to verify that the oral fluid detection system will work for the foreign disease, says Liz Wagstrom, chief veterinarian for the National Pork Producers Council.

Full diagnostic verification is a necessary, but it's a difficult process because it involves traveling to countries with outbreaks, collecting samples, and then traveling with those samples that present a major threat to any country’s swine industry, Wagstrom said.

USDA is not talking publicly about the ongoing efforts to finalize the use of the surveillance system for ASF, but USDA Chief Veterinary Officer Jack Shere said in a statement Thursday that speed is essential when monitoring for the disease.

“Quick detection of any illness helps prevent large outbreaks," Shere said. “We would rather be called out to investigate an illness and rule out a foreign animal disease than have someone wait to call us, allowing a disease to spread to other animals and herds.”

Swine veterinarians also say a vaccine is critical for prevention, but inoculation isn’t currently readily available across the globe.

From about 2002 onward, there hasn’t been much work in the U.S. on developing a vaccine. The Department of Homeland Security took over the functioning of the Plum Island Research facility from USDA. As part of that takeover, USDA was required to contribute dollars to support the takeover, and they did that by eliminating the ASF Research program.

“We’d certainly be in a better situation if there was a vaccine available ... but could be farther down the road had we continued research into that development,” Harry Snelson of the American Association for Swine Veterinarians told Agri-Pulse.

Greg Ibach, the USDA undersecretary who oversees APHIS, said USDA has started to make headway on the “diagnostic tests” but has “not had a breakthrough on the vaccine side” yet.

“You can never be 100 percent prepared, but we are far greater prepared now than we were five years ago,” Sundberg said.