“The frustrating thing as a businessperson is, when you’re handcuffed and the other people aren’t, and you know they’re breaking the law,” president of Catfish Farmers of America, Shorty Jones, told Agri-Pulse.

Last week, the International Trade Administration (ITA) issued its final determination on anti-dumping rates to impose on Vietnamese companies violating inspection requirements. The anti-dumping penalties for the noncompliant companies range from $1.37 per kilogram to $3.78 per kilogram on frozen catfish fillets. The Commerce Department intends to issue appropriate assessment instructions to Customs and Border Protection 15 days after publication of the final results of the administrative review.

“Competition is a really a good thing,” Jones said. “(However), we don’t want (Vietnam) producing a fish costing $3 and say it costs a dollar and then bring it full of antibiotics."

The Food and Drug Administration regulates all seafood, but the 2014 farm bill created a USDA Food Safety and Inspection Service program, beginning in 2016, for Siluriformes fish, or catfish, raised domestically and imported.

Jones, of Glen Allan, Miss., said FSIS inspections have helped domestic catfish producers by cutting cut out some competition when other countries could not meet the U.S. standards.

According to FSIS, as of April 2018, only 13 of 62 Vietnamese companies currently comply with regulatory requirements to sell fish as human food in the U.S.

In a nearly “billion-pound industry," U.S. producers only “supply a third of the catfish” eaten in this country, or roughly 330 million pounds, Jones said. The rest comes from Vietnam and China.

According to American Farm Bureau Federation calculations of USDA Foreign Agricultural Service data, catfish imports are up 104 percent this year and were increased 44 percent from 2017 to 2018. The largest exporter to the U.S. is Vietnam, whose exports are up 119 percent year to date.

The determination is a win for southern catfish farmers like Jones. For years, catfish producers have argued illegal dumping has taken place since the U.S. and Vietnam signed a bilateral trade agreement in 2001. 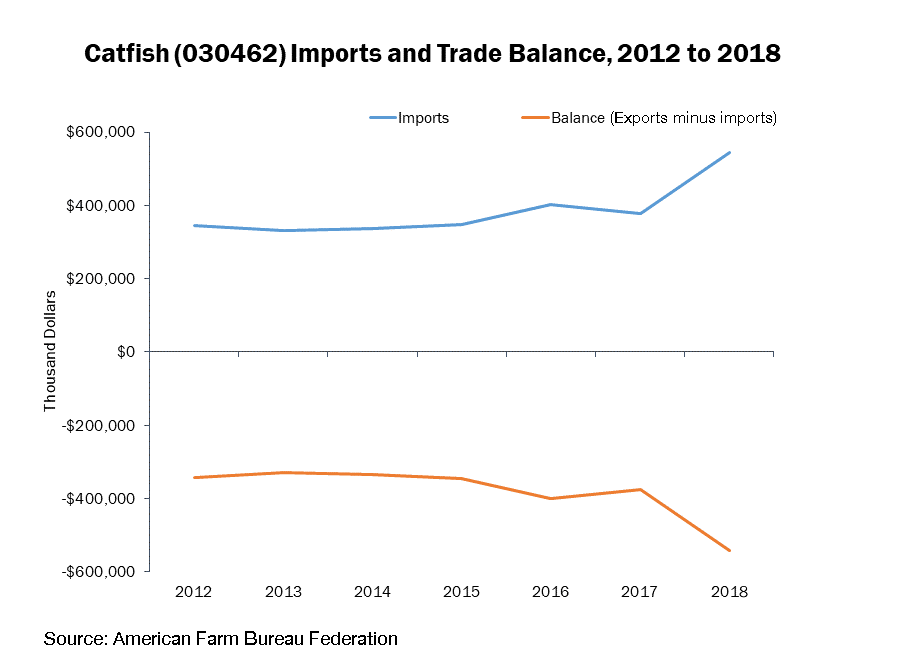 As of February 2001, water surface catfish production acres totaled over 190,000 acres. As of April 2, they span just over 60,000, according to USDA’s National Agricultural Statistics Service.

“We are, at last, seeing the restoration of a level playing field for our catfish producers, who have had to fight unfair trade practices for years,” Sen. Cindy Hyde-Smith, R-Miss, said in a statement.

“I will continue working to ensure our nation’s trade laws are enforced and that Mississippi’s catfish farmers are not undercut by inferior and potentially dangerous foreign imports,” Wicker said in a release.

As far as producers expanding catfish operations because of the determination, Jones said he’s not heard of any but said “there’s plenty of room” to grow.

He added the industry continues to develop new ways to market its product to millennial consumers asking for better quality and safer food but said the “only limiting factor is us.”