Simon Groot, a Dutch seed developer known for his work with vegetable production in over 60 countries across Southeast Asia, Africa, and Latin America, has been named the 2019 World Food Prize Laureate.

Groot, a sixth-generation seedsman, began his career by moving to the Philippines in 1982 and started East-West Seed, a vegetable seeds breeding company focused on small business holders as its main clientele. His idea was that one good vegetable seed could change the lives of the poor.

When he started this business, commercial vegetable breeding was unknown in the tropics. Farmers struggled to grow crops with seeds they often saved from season to season, causing low yields, poverty, and malnutrition. Groot recognized the struggles farmers faced and helped them incorporate diversity into their farming operations through high value vegetable crops. 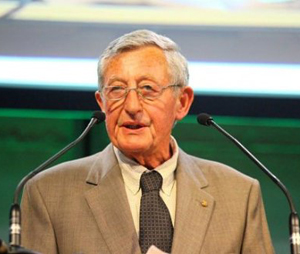 After years of research, Groot and business partner, Benito Domingo, introduced the first locally-developed commercial vegetable hybrids. Along with this technology, Groot recognized the importance of education and created the East-West Seed’s Knowledge Transfer program, which trained thousands of farmers each year in agricultural practices for vegetable production. The combination of quality seeds and better farming methods allowed farmers to see dramatic increases in their profits and allowed for more nutritious and affordable vegetables to make their way to local markets.

“Mr. Groot developed a stunningly impactful global network of seed producers who are transforming the lives of 20 million farmers every year," Quinn said. "For this extraordinary accomplishment, he truly deserves to be named the 2019 World Food Prize Laureate."

Today, East-West Seed serves over 20 million small holder farmers in over 60 tropical countries in Asia, Africa, and Latin America. Groot will receive a $250,000 prize awarded by the World Food Prize Foundation and will be recognized at a ceremony at the 2019 World Food Prize on October 17 at the Iowa State Capitol Building in Des Moines, Iowa.