The diversity of the district Republican Senator Jeff Stone represents has led to a lineup of unique parings this legislative session. He has defended the insecticide chlorpyrifos against a ban in two hearings, while co-authoring bills with some of the most liberal senators in the legislature.

Stone is proud of the Temecula wine country he helped revive as a city councilmember. He was a “gentleman farmer” himself, having run a small vineyard and bottled a wine that once beat his Northern California competition in blind tasting competition.

His Senate District 28, which stretches across most of Riverside County, also has a well-established dairy industry and produces table grapes and olive oil. It touches progressive coastal enclaves, runs to the desert border with Arizona and includes part of the Sultan Sea.

Stone spoke with Agri-Pulse on the role his science background as a pharmacist plays, his takeaways on the governor’s priorities and how Republicans are viewed in Sacramento.

1. What are some of the concerns that the ag industry has brought to your desk?

I would say that the Temecula wine country is probably the biggest part of my legacy. I've been an elected official now for 27 years. When I was on the Temecula City Council, the wine country was in its infancy. It was hit really hard by Pierce’s disease, with the glassy winged sharpshooter, and 20% of the vines in Temecula were destroyed. It was a big part of our tourism attraction.

I worked with Senator Feinstein and other congressmembers. We secured $13 million in grants to fund research at the University of California, Riverside. Fast forwarding, I was on the board of supervisors during that transition as we found the cure and started treating the vines and I was getting calls as a county supervisor to rezone a lot of large swathes of vineyards to medium-density residential from the largest home builders in the country. I recognized at that point in time that our wine country could be gone as fast as we put it together.

So one of my goals as on the board of supervisors was to preserve the wine country… Our wine country last year brought in over a billion dollars.

2. You sat in two committees that heard arguments over SB 458, a bill to ban the pesticide chlorpyrifos. Was that the first time you encountered a bill like this, that overrides regulatory agencies?

No and I'll give you an example. I'm a pharmacist by profession. There's actually an effort underway right now (by CalEPA) to classify Tylenol as a Prop 65 issue, which requires a cancer warning.

The legislature, to a fault, looks for a problem – even if the problem isn't real or significant – to come up with a solution. But they don't realize that their solutions often either frighten people or put people out of work.

If you listen to the testimony on this particular insecticide, it is used rarely. We always use something that is known to be less toxic to accomplish the goal. But there are some instances where you have to use this insecticide or you can kiss certain agricultural industries goodbye because the pests are going to kill the product.

Sometimes we get into the weeds on bills. We talk about people who have gotten sick, who have become exposed to some of these insecticides. But these are allegations; these aren't proven. In the rare cases where the allegations are true, it’s somebody who really hasn't followed the safety handling precautions on the product and as a result got sick. 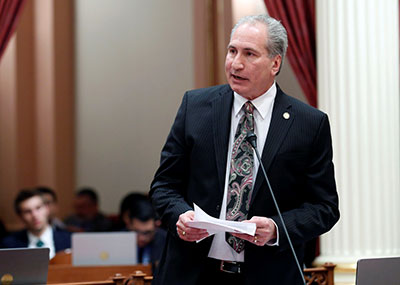 The legislature likes to broad-brush legislation to eliminate things. The last thing the industry wants is to do something that's going to poison the people who are consuming the product. If anybody knows and studied this more, it's really that the professionals are the farmers…

Monsanto is a big company and the legislature isn't real fond of Monsanto, because of bioengineering and GMO products. Sometimes we try to nurture technology in the state of California, being basically the capital, in Silicon Valley, of research and development. Then, unfortunately, when they become too successful, the legislature tries to put the brakes on their success, as you can see with AB 5. That's going after Uber and Lyft right now and trying to basically destroy their employment model, which has helped so many people who need extra income and on their own schedule and on their own time. By imposing these labor regulations on them, it's going to have a dramatic effect on people's lives. It's no different than we see in the agricultural community.

(SB 458 author Senator) Durazo doesn't come from a scientific background. She's not a farmer. She's not a scientist. She’s a labor organizer. A labor organizer has no business in understanding the toxicology of insecticides. She’s just relying on the sponsors of the bill, who want to further protect the environment from insecticide use.

3. How has the political makeup changed in the legislature since you've been in office?

When I came into the legislature (in 2014), we were fortunate in that we had 15 (Republicans). We took the supermajority away from the Dems to raise taxes, give constitutional amendments and things like that. We had a little bit more clout. But when Trump was running for office, it created a schism within the Republican Party. He was viewed as toxic by many in the Democrat Party. Unfortunately, California is a very blue state and the voters took their anger out on our congressional delegation and on some of our Senate delegation and our U.S. Congress numbers declined.

We saw our State Senate and Assemblymembers decline to the point where Democrats just see us as a nuisance. They can do whatever they want with or without us in the capital.

I've always had the attitude of working hard with the other side and pretending as though we have better numbers. But this forces us to work in a bipartisan way. Some people could look at the glass half empty. I look at the glass as half full.

4. What's your impression of the 2019 legislative session to date?

Part of the legislative session is to really figure this governor out. There's been a lot of frustration – I know more on the Democrat side than the Republican side, because we don’t typically have a lot of interaction with him. With Jerry Brown, he had an open-door policy… This governor's kind of standoffish – not just with me but even the Democrats. He has his own agenda. The issue is that he's running the state as a candidate for president in 2024, instead of running the state with albeit a lot of problems as governor. And we have so many severe problems... There's a flight of businesses out of the state of California because we just overregulated our businesses so much and decimating the middle class.

I've never seen a governor flip-flop on so many issues as this governor has flip flopped on. He gives you his direction one day and changes it the next. He’s constantly got his finger in his mouth and checking the winds and seeing which way they're blowing before he makes the decisions. If there's an atmospheric shift, then the next day you read that he was misinterpreted, and this is really what he meant

It's going to be a learning experience now to see where he's going to be on a lot of these bills that Jerry Brown has vetoed in the past. The Democrats are testing this governor to see if he’s going to be as tough on some of their legislation that will have a dramatic effect on agriculture and other certainly other businesses in the state of California.

5. Anything else you would like to say to the agriculture community?

I've always been a strong advocate for the ag community…

You may remember that ag workers were allowed to work 60 hours a week, without getting overtime. And they loved it because they made a lot of money to help their families here... When (Assemblymember) Lorena Gonzalez, per the union's influence, said they needed to be treated like every other employee in the state of California, I met with workers who said, “We don't want that. She's doing something that we don't want. We like the 60 hours. We get paid well for what we do.” I warned my colleagues on the floor that just by enacting this you're not going to get overtime for these 20 extra hours for these farmworkers. It is commodity price driven. Instead of having two people working 60 hours a week, which is 120 hours, they’re going to have three people working 40. You're hurting the people that you are trying to protect. They didn't listen to us. As a result, there's been problems now because a lot of these migrant farming employees have gone to other states.