President Donald Trump tweets so frequently that he often dominates the daily news cycle in ways that can make even the most astute observer wonder what he’s up to. But there’s one area where he’s been focused on creating a legacy that could have impact for years to come: Selecting new, more conservative judges for federal courts.

Gary Baise, a principal at OFW Law and co-head of the firm’s litigation practice, agrees.

“Trump understands how important judges are for a common-sense approach,” he says. “For agriculture, this means that environmentalists and some of the activist groups who like to sue because they can’t get their way in Congress or the regulatory system will lose a vital outlet.”

With the help of Majority Leader Mitch McConnell, R-Ky., and Judiciary Committee Chairman Lindsey Graham, R-S.C., the Senate confirmed another 13 district court judges before leaving for the August recess, bringing the total number of federal judicial appointees to 146 by Aug. 1.

In less than three years of his first term, Trump has appointed two Supreme Court justices, 43 judges to the U.S. Court of Appeals, 99 to the U.S. District Courts and two judges to the Court of International Trade. All are lifetime appointments.

By comparison, President Barack Obama had appointed 91 federal judges and George W. Bush had appointed 145 as of Aug. 1 of the third year of their presidencies. 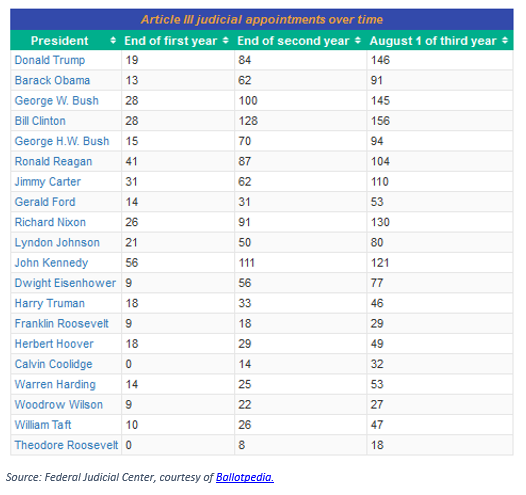 McConnell has made it clear he’s committed to filling those empty slots.

“I want you to know that my view is, there will be no vacancies left behind. None,” McConnell said during a June speech.

One of the biggest impacts of Trump’s judicial picks can be seen on the 29-member U.S. Ninth Circuit Court of Appeals, based in San Francisco and home to some of the country’s most liberal jurists. From pesticides to endangered species to animal welfare laws, this appeals court has historically ruled in favor of groups who have challenged agricultural interests. The court hears cases arising in nine western states, including California, Hawaii, and Oregon.

Currently, 16 of the Ninth Circuit judges have been appointed by Democrats, 12 by Republicans and one seat is vacant. Seven of those 12 judges have been nominated by Trump. Once the last vacancy is filled, Republican presidents will have picked 13 of the 29 active seats on this appellate court.

“In three years, he has basically evened out the Ninth Circuit,” points out Formica. “That is something I never would have imagined in my wildest dreams.”

But just because judges are appointed by Republicans does not guarantee that decisions will be favorable to agricultural interests, says Anthony Schutz, associate professor of law at the University of Nebraska.

“I don't think you will find ag-friendly appointees issuing ag-friendly decisions just because they are ag friendly. While the executive's decision to pick an appointee might be political in nature, the judiciary tends to be more principled. And, often, the political choice to select a judge depends on the sense that the principles a judge exhibits will be beneficial to some political end. Sometimes that is the case, but sometimes it is not,” Schutz said.

For example, consider a judge who is hostile to the notion that the judiciary should defer to agency decision-making.

“An agency that issues an ag-friendly rule on, for instance, the scope of the term 'waters of the United States' under the Clean Water Act might find itself overturned if the court disagrees with its interpretation and refuses to lend the agency any deference," Schutz added. "Such an interpretation might be beneficial to ag interests, but you will generally not find a judge allowing agency action to stand on that basis. Rather, the underlying principle of the proper amount of deference to lend an agency would play a big role in the decision.”

“In the first, these judges are less likely to buy into the idea of a limitless commerce-clause doctrine. Because the regulation of agriculture is a quintessentially commerce-laden activity, it is somewhat unlikely that a Trump judiciary would limit federal authority over agriculture. To do so would require the reversal of some very long-standing cases on the scope of federal power. Nearly no one predicts such a reversal.

“So, it seems unlikely that the Trump judiciary would make significant changes to the scope of federal commerce authority over production agriculture and, certainly, over the ensuing movement of ag products on regional, national, and international scales.”

But Schutz says there is a second type of commerce-clause case that deals with the implicit limits that the commerce clause places on states.

“Here, there is a slightly higher possibility that a Trumpian court or judiciary would be somewhat less hostile to state regulation or taxation that places a burden on agricultural commerce," he said. "This is because, sometimes, judges in the camp that Trump would pull from are hostile to the dormant Commerce-Clause doctrine. The possibility is somewhat small, however, because there are many judges in his pool who view the doctrine as a good way of protecting the regulated community from state interference.

“But if one combines a penchant for state rights with a hostility to an active judiciary, sometimes this results in a dim view of the dormant commerce-clause doctrine," Schutz added. "For ag, that would mean state regulation (in areas like animal welfare or the environment) would likely withstand constitutional challenge, at least in areas where the federal government has not passed legislation.”

Although Trump has repeatedly pointed to cases where he believes that federal judges have their own political agendas, Chief Justice John Roberts tried to reinforce the independence of the federal courts when he issued a rare Thanksgiving eve statement last year, rebuking some of Trump's comments.

“We do not have Obama judges or Trump judges, Bush judges or Clinton judges. What we have is an extraordinary group of dedicated judges doing their level best to do equal right to those appearing before them," Roberts said.