The U.S.-Mexico-Canada trade agreement is headed for easy approval on the Senate floor, but the uncertainty surrounding the impeachment process could mean farmers and ranchers will have to wait several more weeks for that final congressional vote.

“I expect that USMCA will receive nearly unanimous support … when the full Senate takes it up, hopefully very soon,” Senate Finance Chairman Grassley told reporters ahead of the committee's 25-to-3 vote on Tuesday to approve the USMCA implementing bill. Approval by the full Senate will send the measure to President Donald Trump for his signature.

The big question is when that will happen.

The House of Representatives voted to impeach Trump last month, and as soon as the two articles of impeachment — abuse of power and obstruction of Congress — are transmitted to the Senate, the Senate has to concentrate solely on them before any other business.

House Speaker Nancy Pelosi, in an apparent effort to give Senate Minority Leader Chuck Schumer leverage in his demands that witnesses be called during a Senate trial, has not yet sent over the articles.

That could give the Senate the opportunity to hold a vote on USMCA if it acts quickly. 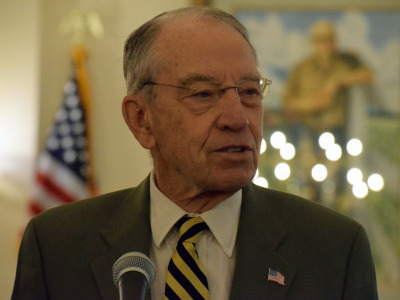 Still, it may not be that simple. Technically, at least three Senate committees — Commerce, Banking and Environment and Public Works — also have jurisdiction over USMCA. That means those committees could hold up the process, but Grassley said he believes that’s unlikely.

“Ultimately, timing is up to Leader McConnell and when Speaker Pelosi decides to send over the articles of impeachment,” Grassley said.

And now McConnell is telling reporters that he won’t be pushed into having witnesses at the trial — at least initially. McConnell says he has enough support from GOP senators to begin a trial without the witnesses Democrats are demanding.

Pro-USMCA lawmakers and ag groups continue to press the Senate to vote on the implementing bill.

“I commend Chairman Grassley for his leadership in building support for this agreement in the Senate, and I encourage swift action on the Senate floor so we can send this agreement to the President’s desk as soon as possible,” said Texas Rep. Kevin Brady, the top Republican on the House Ways and Means Committee. “It’s time to bring this deal across the finish line so we can bring North American trade into the 21st Century.”

The U.S. dairy and poultry sectors are expected to be two of the biggest winners in USMCA, and wine producers also stand to benefit.

“Dairy’s gains under USMCA would be substantial — an estimated $528 million in increased revenues over the agreement’s first six years, as well as protection for common cheese names and enforcement mechanisms to ensure repeal of Canada’s problematic Class 6 and Class 7 milk price schemes,” said Jim Mulhern, president and CEO of the National Milk Producers Federation.

U.S. wine producers and exporters will also be winners under USMCA, scoring fairer treatment in one Canadian province. British Columbia does not allow U.S. wine to be sold on regular grocery store shelves, relegating it to be displayed in a separate “store within a store” that is physically separated from the main retail outlet, but that is set to end with implementation of USMCA.