In the shadow of the stadium where the Matanzas Cocodrilos baseball team plays, agricultural innovation is thriving. This eight-hectare urban farm about two hours east of Havana, Cuba, features creative irrigation, unique cover crops and a biodigester.  While this sounds like a farm of the future, one can’t help but notice the oxen who serve as the farm’s “tractors,” and the use of harvest methods circa 1940.  As an American grandfathered in to travel to Cuba on the person-to-person classification in November, I gained firsthand perspective into a land whose people are both stuck in time and cutting edge. The urban farms my group visited, like all of Cuba, represent several paradigms of agriculture. I quickly learned Cuban farmers don’t wish to relive the past of a sugar cane monoculture and want a chance to compete on the global stage. What would happen if this land was enabled to reach its true potential, could it be the next California?  Being there for a week interacting with people from all parts of the Cuban food chain opened my eyes to the potential of this nearby island nation. 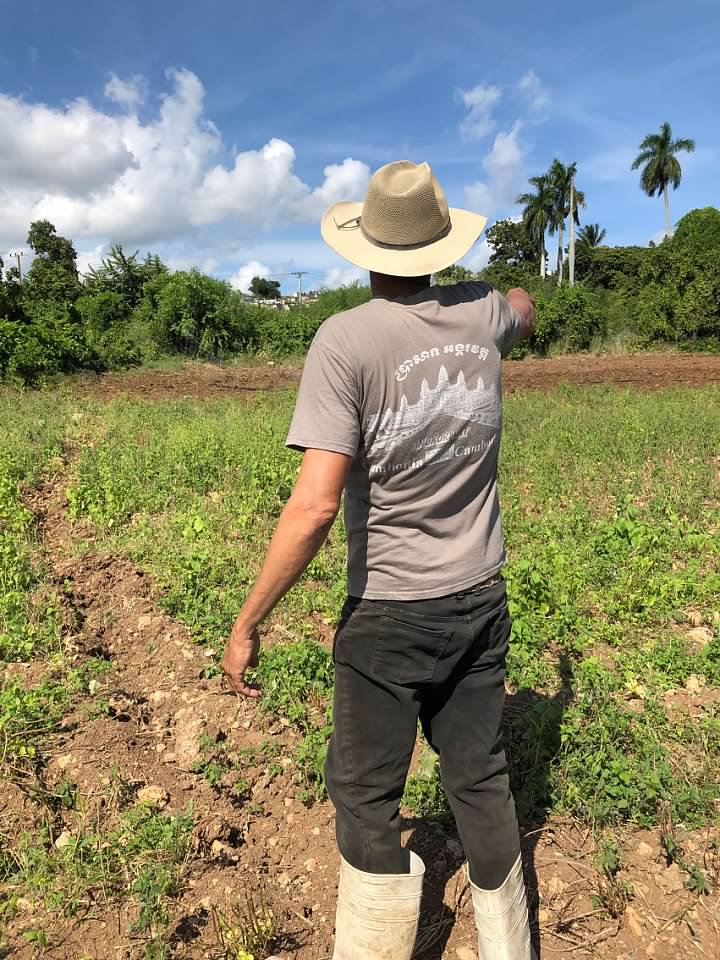 While clearly there are political dynamics holding progress at bay, Cuban farmers have a sense of determination about them that can’t be contained. Take, for example, the 45-year old farmer I met in Matanzas. His land is on the site of an abandoned sugar mill, so he created a biodigester out of an old cistern. He feeds it with manure from his oxen, vegetable scraps as well as sawdust, building a sustainable cycle of waste renewal. Capitalizing on the fact that private enterprise is now allowed, he is raising roses to sell to fund his daughter’s Quinceañera celebration. He personifies Plato’s platitude that necessity is the mother of invention, building ditches to divert the city’s wastewater and prevent it from impacting his lettuce, radish and chard crops. The 40,000 tomatoes he harvests come from seeds that he has tenderly guarded from the sun via sawdust.

“You can’t get greedy,” he told the group through our translator, citing a time when he planted green beans out of the natural cycle taught to him by his grandfather.  The sun fried the bean plants right before harvest, meaning he had nothing to sell the hotels who were seeking them.  His land is in continuous rotation – he was planting sweet potatoes and sorghum the day we were there, with harvesting other crops also happening after his family fed us lunch.  Truly nothing is wasted, from cattle eating the carrot tops to the rabbits eating the spent flowers that are natural insecticides around the plots.

Cooperation is a powerful force in Cuban agriculture. The farmer we visited is one of 100 farmers who own their land and share ideas about innovative agricultural practices.  One farmer I met also cooperates with society at large in that he taps former prisoners as labor. The eight men who have now been helping him for years have improved their own self-esteem as they provide for their families. 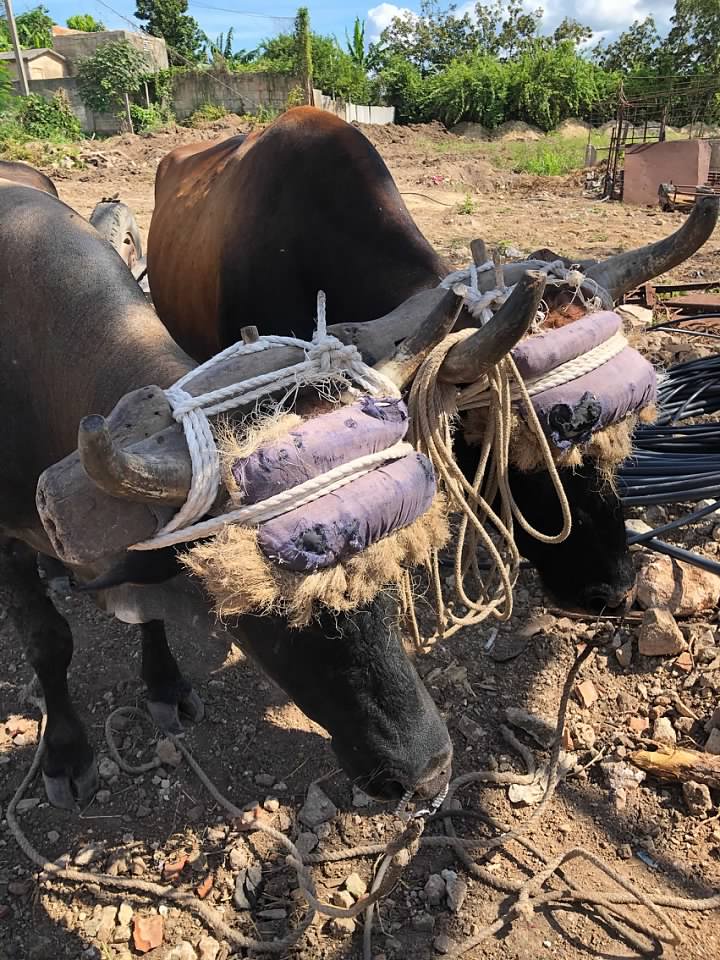 These oxen are the “tractors” of Cuban agriculture.

Cooperation was also a driving principal at the Alamar Organic Farm.  Our tour was given by Isis Alamar – she’s the “good kind of Isis” she assured us – as she told us of her father’s work to establish this cooperative farm in 1997 which now has 400 members. Cubans were literally starving after the collapse of the Soviet Union, and her father saw the potential of producing food locally. Today, this organic farm features hectares of shaded nurseries, a worm farm to help mitigate the iron in the red soil, and a hut where herbs are processed by hand – all organic crops.  Why organic? Isis pointed out this is by necessity as they can’t get pesticides, leading them to create their own biological solutions.  “We confuse the insects with marigolds, basil and other natural deterrents.”  She rolled her eyes when asked about biotechnology, citing her belief that even if they could get this technology, it signals giving up control to companies. She observed that while the government wants to help agriculture, all the money goes to health and education. “We farmers have to wait,” she shared, striking me as a person who isn’t overly patient.

Pages could be written on the politics on both sides of the border holding this country back. I can only hope that time, continued innovation and persistence of people like the farmers I met will enable Cuba to reach its full, diversified potential. 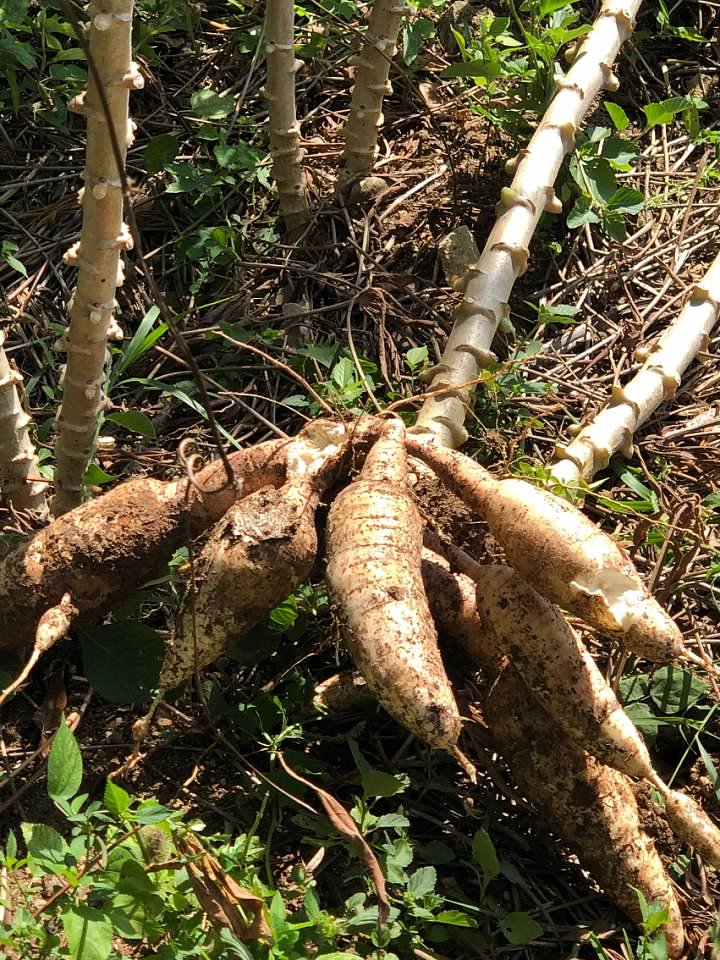 Getting ones’ daily bread in Cuba is no small task as the food system in this communist country is complicated and expensive.  As a country that has never been able to feed itself, Cuba imports as much as 80 percent of its food, and eats more rice per capital than China, raising only a small portion of it. The collapse of Soviet Union in the early 90s necessitated a “pull up by their bootstraps” approach and urban gardening became a necessity which supplements the three-step dance that Cubans do daily: 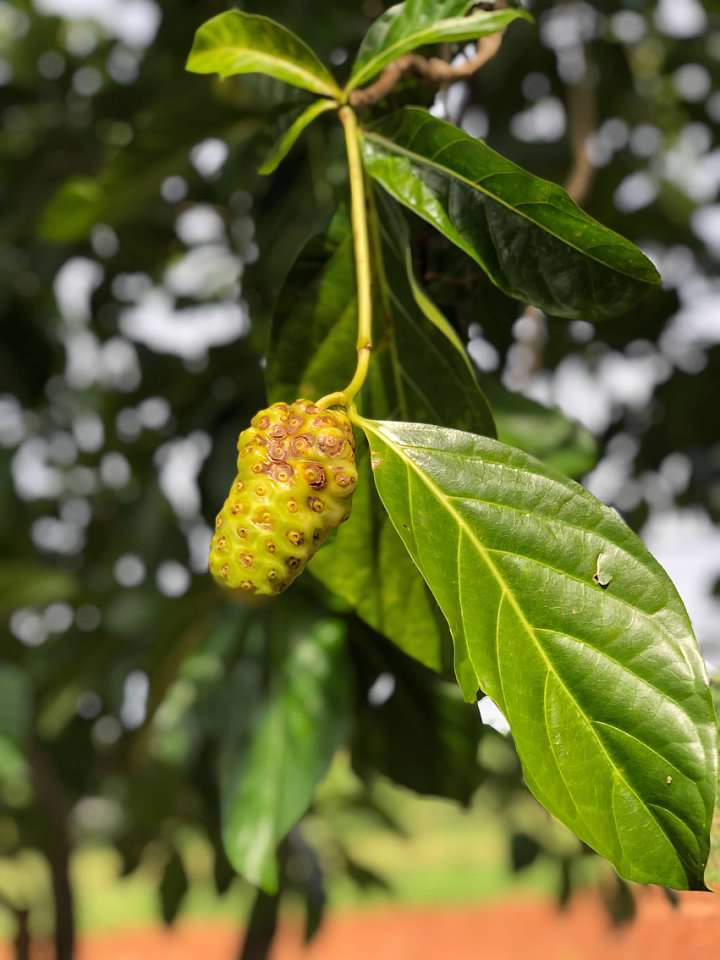 CUC Store: While there are various opinions on what the CUC term actually stands for, the “Cuban convertible peso” is the most commonly accepted to describe this part of the two-part currency system in Cuba.  The CUC store only takes that currency (not the Cuban peso) and is where one can buy canned items or frozen food.  Keep in mind an average salary is 50 CUC per month, and with a pack of 30 diapers costing 11 CUC, money doesn’t go far and supplies of most imported items are sporadic at best.

Kenda Resler Friend is president and founder of KRF Public Relations, Indianapolis, Indiana.  An agricultural industry veteran of 30 years, she has worked in the PR firm space as well as leading communications at Dow AgroSciences for several decades before retiring from the company in 2019.  Kenda earned a B.A. in public relations and an M.S. in agricultural communications from Purdue University, West Lafayette, Indiana.  You can find her on Twitter @IndyKRF.