State lawmakers are skeptical Gov. Gavin Newsom and his administration will be able to make up for further cuts to the incentives programs that support farmers in reducing dairy and diesel emissions.

“We're going to continue to drive out dairy farmers from California if we don't assist them,” warned Senator Mike McGuire, who represents a rural district in Northern California, during a Senate hearing last week on the administration’s proposed climate budget.

McGuire pointed out that former-Gov. Jerry Brown had funded methane reduction programs for manure management and dairy digesters at $90 million each year. The Senate pushed for the same last year, he said, but instead the programs took “a serious haircut,” with funding down to $32 million. McGuire called it unacceptable for the current budget to propose even less, at $20 million, for a program that is oversubscribed. He said the vast majority of those dairies have 300 cows or less and desperately need the assistance to meet emissions requirements.

CDFA Secretary Karen Ross told the committee that the accumulated funding for those programs – nearly $300 million to date – has pushed the state more than halfway toward meeting its 40% methane reduction goal.

“(That money) has gone where we can get the biggest reductions, which is the Central Valley, which happens to have larger herds,” she explained, adding that 200 more projects will soon be coming online.

With the state seeding this technology, banks are taking notice and beginning to invest as well, she added.

Incentives programs across the agencies are seeing cuts due to an estimated drop of $400 million in the cap-and-trade revenues being invested into the Greenhouse Gas Reduction Fund (GGRF) this year. This silver lining, according to CalEPA Sec. Jared Blumenfeld, was that proportionately, the funding has changed little across the programs.

“When you look at the cuts in these areas as a percentage of the total discretionary funds within the GGRF, they're either staying level or growing slightly,” he said.

Sen. Bob Wieckowski of Fremont asked about cuts to the program for replacing aging agricultural equipment with cleaner engines, known as FARMER.

“You've got a popular program that's underfunded and targets the most polluting vehicles and we're cutting another $10 million?” he said.

In a separate public comment, policy advocate Lauren Noland-Hajik, representing several farm groups, said the Air Resources Board can only achieve its goal of reducing 11 tons per day of nitrous oxide in the San Joaquin Valley if the state provides FARMER with $193 million annually over the next three years.

“While that's a big number,” she said, “those are tangible health benefits in a state that has the worst air quality.” 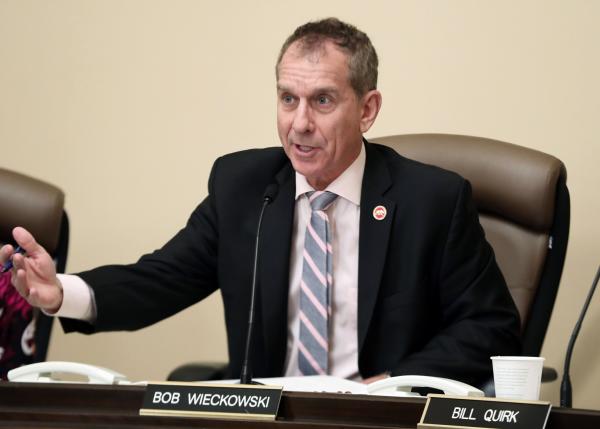 In response to Wieckowski, Blumenfeld said the state has already “given millions upon millions of dollars in incentive funds” for the whole suite of diesel replacement programs, and California should instead start focusing on low-interest loans. This is why the administration proposed in its January draft budget a Climate Catalyst Revolving Fund. The program would offer low-interest loans to small businesses and disadvantaged communities for adopting new mitigation technologies that reduce emissions. Dairy digesters, FARMER and water efficiency projects would be ideal projects for the loans.

“We've seen some proof out there that these work and make sense for the farming operation,” explained Ross. “But we're still not getting the scale at as rapid a pace as we know we need to for the climate.”

She said the loan program would give agribusinesses another option, without having to commit to a grant timeline. She cautioned the loans would not be appropriate for all parts of California’s farming community.

In its review, the state’s nonpartisan Legislative Analyst’s Office (LAO) was skeptical. It found the administration had not adequately justified spending the $1 billion requested for seeding the loan program. Instead, it proposed a pilot program to assess if a need actually existed for those projects. It also recommended dairy farmers instead access funding for digesters through carbon trading markets.

“But there are some exciting programs that are already here and just need proper incentives and technical assistance,” she said.

Last week, Sen. Henry Stern of Los Angeles introduced a bill that would establish the framework for administering the fund, though it does not offer any details yet on spending.

The administration is also negotiating with the Legislature over a climate resilience bond, which is mostly aimed at financing adaptation projects. The LAO, however, called the administration’s bond proposal too ambitious, particularly with spending on water infrastructure projects and groundwater management.

Ross responded that CDFA’s suite of climate-smart agriculture grants “have made a significant step in the right direction to demonstrate why these fit into the business models” of farmers.

“This revolving loan fund and the bond provide the dollars to scale it up and that's where we're focused,” she said.

Natural Resources Sec. Wade Crowfoot added that the bond would be a critical down payment and first step in long-term protection for communities:

“Is it the sum total we should spend in the coming decades? No.”