House Democrats who flipped rural congressional districts in 2018 have been bracing for the possibility that U.S. Sen. Bernie Sanders - a Vermont Independent who caucuses with Democrats and describes himself as a Democratic Socialist - could be their party's presidential nominee. But those concerned about the potential of Sanders at the top of the ticket may be breathing a sigh of relief after former Vice President Joe Biden’s strong showing on Super Tuesday. Biden won at least 9 states voting yesterday, with Maine still too close to call.

In a dramatic turnaround, Biden now leads the Democratic delegate count with 246, compared to Sanders with 229, Sen. Elizabeth Warren with 16 and former New York City Mayor Mike Bloomberg with 8.

Some freshmen members maintained that they can win, regardless of who tops their ticket.

“I can stand on my own two feet,” freshman House Democrat Anthony Brindisi, D-N.Y., told reporters last week, ahead of primaries Tuesday in 16 states and territories.

Brindisi defeated one-term incumbent Republican Claudia Tenney in 2018 in a narrow 50.9% to 49.1% victory. His district voted overwhelmingly for President Donald Trump in 2016.

The GOP has some 31 districts they are targeting to take back the House this election, and Brindisi’s is one of them. Trump won the district in 2016 by 15 points over former Secretary of State Hillary Clinton.

Despite Brindisi expressing confidence that he could win even if Sanders were at the top of the ticket, some members fear there could be major implications for swing districts like his.

The vice chairman of the House Agriculture Committee, Filemon Vela, D- Texas, is backing former Vice President Joe Biden and told Agri-Pulse it would be a bloodbath for Democrats if Sanders is the nominee.

“I think he will swipe the ticket,” Vela said. “There will be so much Democratic vote loss it will make it very difficult for our Democratic members in those districts to overcome.”

Vela expressed confidence that Biden would ultimately win the nomination.

First-term Minnesota Democrat Angie Craig, who was campaigning for Minnesota Sen. Amy Klobuchar before she dropped out of the race and endorsed Biden on Monday, said she was going to let the nominating process play out. 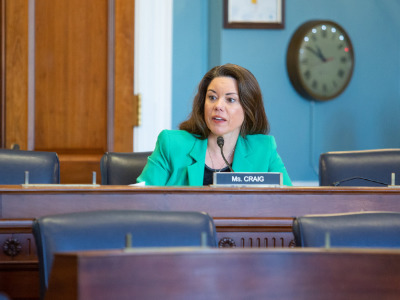 “At the end of the day, it is a complete waste of my time to be a prognosticator on what is going to happen at the Democratic top of the ticket,” Craig said. Craig unseated incumbent Republican Jason Lewis in 2018, receiving 52% of the vote and handing Democrats a key victory.

She and House Agriculture Committee Chairman Collin Peterson, D-Minn., are also on the GOP’s radar, but Peterson has yet to announce whether he is running for reelection, which he normally does after the first of the year.

Some senior members of the committee, such as Jim Costa, D-Calif., who has served a region of California's Central Valley since 2005, are less worried about losing. But that doesn’t mean they aren’t paying attention to the top of ticket.

“I want to have the strongest possible ticket,” the third-generation farmer told Agri-Pulse ahead of the Super Tuesday voting. “While Sen. Sanders has done well thus far, there is still 70% or more or less of the voters that prefer someone else, so I think it is premature to get to that point," he said.

Progressive House Democrats have been telling fellow nervous Democrats not to worry.

“Welcome in, the water is warm, and it feels really good,” said Washington Rep. Pramila Jayapal, who co-chairs the Progressive Caucus and has endorsed Sanders. “He’s speaking to a disaffected working class of every race, including white working-class folks,” referring to Sen. Sanders.

While Sanders taking the top of the ticket could affect rural Democrats down the ballot, a Capitol Hill ag lobbyist told Agri-Pulse the quality of candidates running against these Democrats must also be taken into consideration.

“It’s going to be how far does it carry down ticket, and how much do folks vote straight down the ticket, so it could impact them. But the thing we’re not talking about is whether there are quality candidates running against them,” the lobbyist said.

Members of the National Farmers Union who were asked about the presidential race said they didn't want to pick a favorite. The group, whose policies are in line with several of the Democratic candidates, held its annual meeting in Savannah, Ga., this week.

“Vice President Biden has had good policies in the past and his voting records really are good for family farmers,” Wisconsin Farmers Union President Darin Van Ruden told Agri-Pulse.

He also was interested in Sanders' rural policy proposal calling for supply management in agriculture. “That’s something we’re keeping an eye on," he said.

His group is hosting a forum March 29 inviting Democratic presidential candidates to share their rural policies ahead of the states’ primary on April 7. Trump narrowly defeated Hillary Clinton in Wisconsin in 2016.

Correction: Orginal story innacurately stated Tenney had served six terms in the U.S. Congress. However, she served six years in the New York State Assembly and only one term in the U.S. House. We regret the error.