When the Chesapeake Bay’s “pollution diet” was adopted in 2010, a lawsuit was not far behind.

The American Farm Bureau Federation and a host of farm organizations sued the Environmental Protection Agency, claiming EPA had gone too far by setting not simply a Total Maximum Daily Load (TMDL), or overall limit for sediment and nutrients entering the Bay, but by allocating Bay pollutants such as sediment and nutrients among different sectors in the multistate watershed, including agriculture and forest and urban lands.

The lawsuit failed, first in federal district court in Pennsylvania, then in the 3rd Circuit Court of Appeals in Philadelphia, and finally when the Supreme Court rejected AFBF’s petition in 2016, despite the group’s claiming the TMDL “steps squarely into areas that Congress expressly reserved for the states.”

Now, after years of implementation and some notable achievements and setbacks, more litigation might be on the way, this time with one of the states in the Bay watershed being targeted for failing to meet its goals. The jurisdictions that are part of the agreement are Maryland, Pennsylvania, Virginia, Delaware, New York, West Virginia and the District of Columbia.

Republican Gov. Larry Hogan of Maryland has directed his attorney general to prepare lawsuits against Pennsylvania and the Environmental Protection Agency for failing to meet pollution targets. 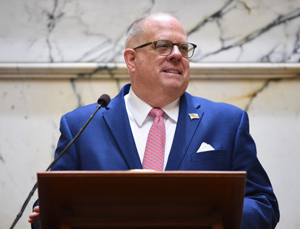 They’re not alone in thinking about going to the courts. The Chesapeake Bay Foundation, whose lawsuit against EPA in 2009 led to negotiations resulting in the TMDL, says it is preparing a notice of intent to sue.

The controversy started bubbling last year when Pennsylvania released its Watershed Implementation Plan (WIP) containing pollution reduction targets for 2025. While Pennsylvania said it would meet its phosphorus goal, it would fall short on nitrogen, meeting only 75% of the goal — close to a 10-million-pound shortfall.

The state’s plan does not “explain how or when additional reductions” from county action plans “will be incorporated into the broader plan to achieve the nitrogen planning target,” EPA said in its review. Nor did the state provide specific “numeric targets” for implementation of best management practices such as soil and water conservation plans or prescribed grazing.

EPA asked for more details on many aspects of the plan, including funding and legislation, which are the province of a Pennsylvania legislature that has consistently underfunded Bay restoration efforts. Pennsylvania’s plan said the state has been receiving about $197 million per year for the Bay, but added that the state needs a total investment in public and private funding of $521 million per year — an annual gap of $324 million.

EPA made recommendations to Pennsylvania but did not threaten any action against it as provided for in the TMDL’s “accountability framework” that includes the implementation plans and milestones for achieving the goals.

Under that framework, EPA can expand coverage of water discharge permits to unregulated areas, increase its oversight of those permits, expand enforcement efforts, and even place conditions on, or redirect, grant money.

But EPA appears to be backing away from using any of those levers to force Pennsylvania to adopt more stringent measures. The real trigger for the threatened lawsuits came when Dana Aunkst, director of EPA’s Chesapeake Bay Program, told a meeting of the Chesapeake Bay Commission on Jan. 3 that “the TMDL is not enforceable,” but merely “an aspiration.”

Maryland Democratic Sens. Chris Van Hollen and Ben Cardin, along with other lawmakers from Bay states, fired off a letter to EPA asking for clarification. The agency responded by citing the government’s response to AFBF’s November 2015 Supreme Court petition.

“The question of whether the TMDL itself is enforceable by a court was answered by the previous administration in court filings defending the Bay TMDL,” EPA Regional Administrator Cosmo Servidio said in a Jan. 28 letter. “In 2016, the Obama Administration told the U.S. Supreme Court that a TMDL is an informational tool that ‘does not impose any binding implementation requirements on the states,’ and that ‘the Bay TMDL does not directly regulate any sources or require any permits.’ The Trump Administration agrees with these statements.”

Nevertheless, Servidio said EPA “will continue to use its existing authorities under the Clean Water Act to ensure that all six Bay states and the District of Columbia are accountable for implementing their share of the Bay TMDL's nitrogen, phosphorus and sediment reductions.”

Van Hollen said the response “ducks the main question we asked: do they plan to enforce the pollution reduction targets in the Bay Agreement?” And the CBF said the question of accountability had been settled by the 3rd Circuit Court of Appeals when “that court upheld the cleanup plans and held EPA responsible to ensure that the state plans had a reasonable assurance of success.”

Even Pennsylvania’s WIP lays out the repercussions of failing to meet its pollution targets. EPA “may increase federal enforcement and compliance efforts,” the state said, by using authorities already included in the Clean Water Act, such as setting “new nitrogen and phosphorus numeric water quality standards for streams and rivers in Pennsylvania” and requiring “more animal feeding operations, industrial and municipal stormwater sources, and urban areas to obtain Clean Water Act permits.”

And EPA, when responding to comments on the TMDL back in 2010, said it was "committed to using any necessary enforcement action at its disposal to assure that the Bay watershed jurisdictions successfully implement the Bay TMDL."

Asked whether the TMDL is informational or enforceable, longtime Vermont Law School professor and former EPA regional counsel official Patrick Parenteau said in an email that the “truth lies somewhere in the middle. The TMDL itself is not self-enforcing but EPA has a number of enforcement tools against a recalcitrant state (like Pennsylvania) if it wants to use them.”

The problem is those options, including taking away grant money and beefing up enforcement of discharge permits, are not very attractive, he said, characterizing them as “cutting off your nose to spite your face.”

Parenteau said he thinks any lawsuit “would have to be in the nature of a contract claim or perhaps ‘unjust enrichment,’” when one party provides a benefit to another party but does not receive compensation. Parenteau called those potential legal avenues “a stretch.” 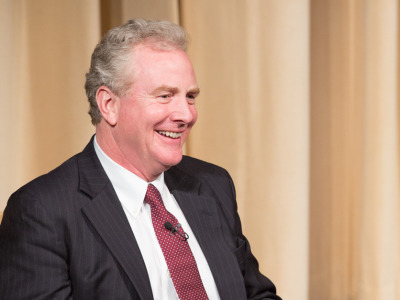 But Van Hollen and CBF point to Section 117(g) of the Clean Water Act setting up the Bay program, which requires EPA to “ensure that management plans are developed and implementation is begun by signatories to the Chesapeake Bay Agreement to achieve and maintain” the agreement’s nutrient and water quality goals.

“I think 117(g) presses EPA into a different place than other TMDLs in other places,” Jon Mueller, CBF’s vice president for litigation, told the Bay Journal.

In Pennsylvania, no one wants a lawsuit. Mark O’Neill, spokesman for the Pennsylvania Farm Bureau, said a suit “would kind of go against much of the goodwill built up over the last few years.”

“We think it sends the wrong message,” he said. “Let’s give this the opportunity to work.”

O’Neill also echoed Pennsylvania’s WIP in saying farmers in the state are not getting credit for all of their on-farm conservation practices. Results of a Penn State survey “demonstrated overwhelmingly that many farmers have, and will continue to, install (best management practices) without state and federal financial support,” the WIP said.

The state’s Department of Environmental Protection, which prepared the WIP, said it and “our many partners are fully committed to meeting Pennsylvania’s goals for water quality in the Chesapeake Bay and locally in our part of the watershed,” spokesperson Elizabeth Rementer said.

On the resources shortfall, she said DEP and partners “are exploring every possible option for funding,” mentioning a proposed $1 million increase in the budget to pay for 10 additional employees.

At a budget hearing last week, DEP Secretary Patrick McDonnell said the staff “will be working with county conservation districts to identify the most cost-effective conservation practices like streamside buffers, manure storage, and wetland restoration, while at the same time helping to secure funding for those needs.”

Nevertheless, he said “there is still a tremendous need for resources.”