“This is an industry that said ‘we are going to be there for the American people’ and I know every American is grateful for that,” Pence said at the headquarters of grocery store supply chain Hy-Vee in West Des Moines, Iowa.

Pence argued the administration has had two goals during the pandemic: keeping workers safe as well as food on the table. During the roundtable, Pence heard from top executives from grocery store chains Hy-Vee and Kroger as well as meat packing companies Smithfield and Tyson.

Smithfield and Tyson have been front and center with as the outbreak has spread through their plants.

The meeting comes hours after the Department of Agriculture announced 14 meat packing pants across the country will be resuming operations.

Ag Secretary Sonny Perdue said while retailers may not have the amount or variety of meat they would like to have right now, they will have it soon.

“Your customers will be there comforted again that the chain is unbroken,” Perdue told the executives who were also at the roundtable.

Last week, President Donald Trump issued an executive order directing meatpacking facilities to implement guidelines announced earlier in the week by the Centers for Disease Control and Prevention (CDC) and the Department of Labor’s Occupational Safety and Health Administration (OSHA). 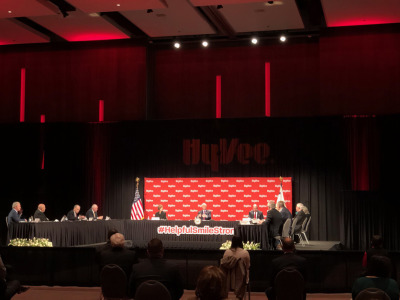 “With half of our income gone and fighting terrible disasters, I call it the perfect storm that we’ve experienced. And now in this perfect storm, one of those elements is this pandemic,” Duvall said.

While roughly 100 or so in the audience applauded Pence for coming to the state, not everyone thought it was a good idea to do so. Former Lieutenant Governor Patty Judge called the visit nothing more than a "dog and pony show."

“Hardworking Americans are treating the sick, stocking grocery shelves, delivering mail, harvesting and processing our food, and keeping our lights on. We owe it to them to stay home and do our part to solve the problem at hand,” Judge said in a statement.

She went on to criticize Pence, claiming he defied social distancing recommendations and should have stayed in Washington.

The United Food and Commercial Workers union, which says it counts among its membership “thousands of Iowa meat packing workers,” said Pence, Perdue, Grassley, and Ernst should work a full shift in a meat packing plant to demonstrate worker safety.

“They should work in the same conditions and under the same fear that our members and their fellow Iowans work under every day,” UFCW said in a statement.

Smithfield CEO Ken Sullivan said at the meeting it was gut-wrenching to have the choice between maintaining the food supply in this country and asking employees to go into plants. “These employees really deserve a lot of gratitude,” he said.