Daybreak: Initiative to convert nearly all farms to organic fails

Failed: Proposal to convert nearly all farms to organic

A ballot proposal to turn 90% of California agriculture organic by 2050 has failed to gather enough signatures. The secretary of state's office announced Friday that organic farmer Bob Cannard’s initiative did not qualify for the November ballot.

To reach the bill’s goal, Cannard proposed a 1% tax and a 3% annual reduction in the use of conventional pesticides for the next 30 years.

Remember: Cannard’s Green String Farm in Petaluma supplies produce to Berkeley’s elite Chez Panisse restaurant. In 2016 he told the Press Democrat: “I don’t like telling the plants what to do. It’s better to give them a life of choice.”

Keep in mind: Knocking on doors during a pandemic to collect signatures is problematic. And this is a particularly costly year to run a ballot initiative. Petitioners need a record 600,000 signatures to qualify this year, requiring them to dig deep than usual into campaign funds. 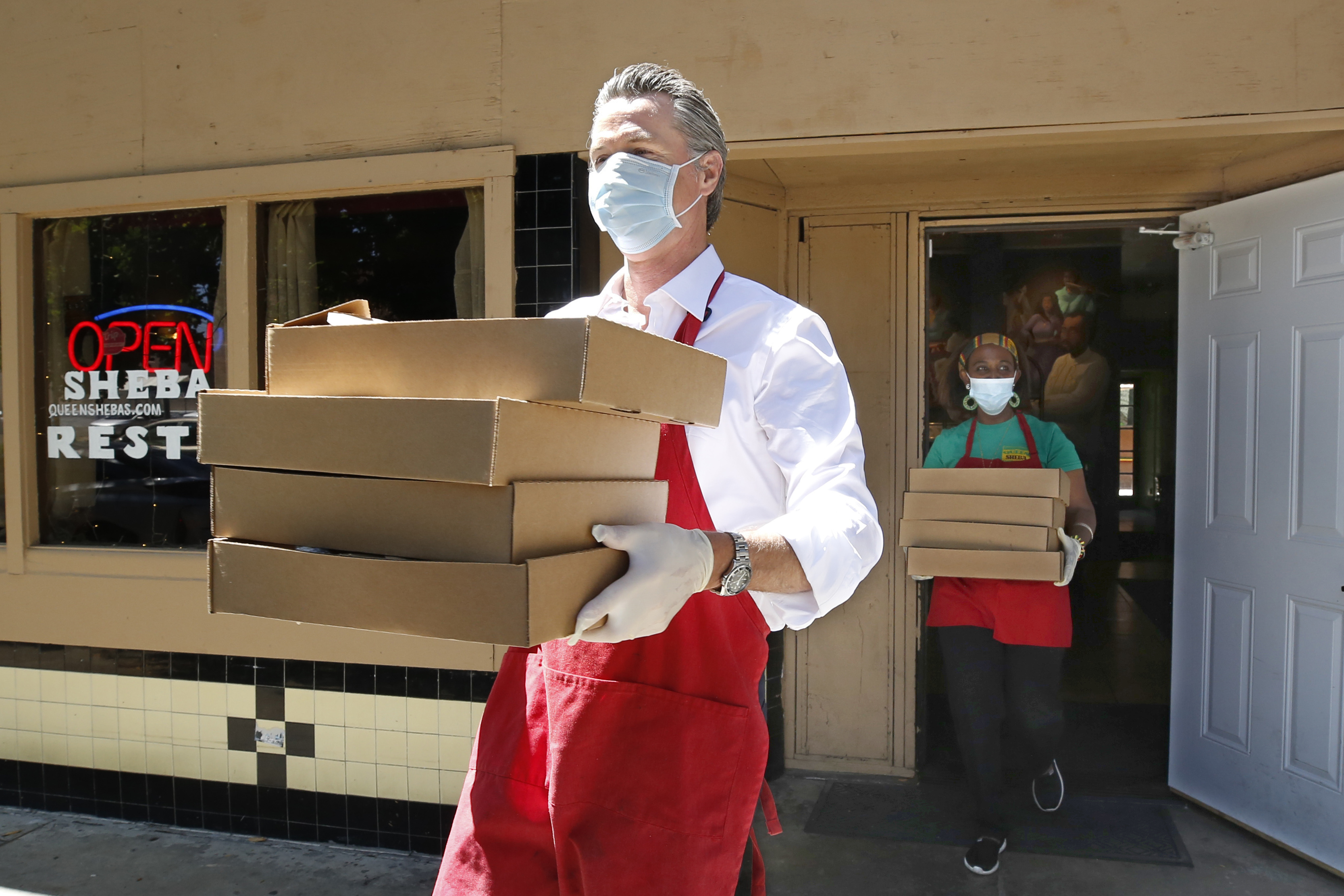 Gov. Newsom helped serve prepared meals to seniors on Friday. The meals program has delivered 1.5 million packages since the state began supporting it in April.

Committee kills proposal for state to pay for family leave

The Senate Appropriations Committee last week withheld a bill on paid family leave taken during the pandemic. The action effectively kills the bill for the year, though the measure could be revived in a budget trailer bill.

The bill would put the burden on the state for wage costs when an employee takes time off to care for a child or adult with disabilities while the school or care provider is closed. It would have taken effect immediately and lasted through the end of the year.

The bill had bipartisan support, including from the California Teachers Association.

Late Friday, a federal judge in San Francisco denied a request to block implementation of the new Navigable Waters Protection Rule. More than a dozen states — including California — and two cities sought to ditch the rule, which replaces the Obama era “waters of the U.S. rule,” which expanded the jurisdiction of the anti-pollution law.

The case will proceed, but U.S. District Judge Richard Seeborg’s denial of the injunction request seemed to signal bad times ahead for the plaintiffs, who were opposed by more than 20 other states. The judge “knocked down virtually every argument they made,” said attorney Mark Ryan of Ryan & Kuehler in Winthrop, Wash., who worked on the 2015 WOTUS rule while at EPA.

But he also says the decision doesn’t bode well for cases filed by cattle producers in Oregon, Washington and New Mexico who claim the new rule still exceeds the authority that the EPA and the Army Corps of Engineers have under the Clean Water Act.

Today’s the last day for farmers and commodity groups that think they were unfairly denied coronavirus relief payments to make their case to USDA. Those commodities include several types of wheat as well as apples. More than 1,200 comments have been posted at regulations.gov so far.

USDA says it was especially interested in getting information with respect to nursery and aquaculture products and cut flowers. But the requests for additional coverage go well beyond those to include hemp, tobacco and clams.

A farm in Hawaii asked for assistance for several crops, including coffee and cacao. “It is important to remember that all agriculture, whether it is for food, or not, supports our nation’s small businesses and family farms,” wrote representatives of the Hawaii farm.

For more about this week’s policy agenda, read our Washington Week Ahead.

USDA’s CFAP gets scrutiny at WTO

CFAP is getting close scrutiny and some criticism by World Trade Organization members. The European Union has expressed concern over the size of the program and it wasn’t alone in its alarm that the aid could be market-distorting.

The U.S., at a Friday meeting of the WTO’s Committee on Agriculture, argued that CFAP won’t distort planting decisions because payments are only based on past production or supplies, but that didn’t end the debate.

Keep in mind: Australia and Paraguay say they are worried that CFAP would set a new precedent for future programs, and Canada has urged the U.S. to confirm that the payments were only temporary. U.S. officials responded that more CFAP spending could be on the way.

We reached out to Asm. Gonzalez to apologize and she responded: “Thanks Brad. Lena and I are good sports about it, we realize our names are very very similar!”

“It is both ironic and frustrating that we continue to search for usable water on other planets, yet we cannot agree on how to share water on this planet.” — Thomas Esqueda, executive director for the Fresno State California Water Institute, in an article urging a collaborative approach to finding a solution for Delta flows