Democrats and Republicans are a long way yet from agreeing on a new coronavirus relief package. But a member of the Senate GOP leadership, Iowa Sen. Joni Ernst, tells Agri-Pulse the Republican proposal will include $20 billion in new spending authority for USDA under its Commodity Credit Corp. account.

Why it matters: USDA still has $14 billion left over from the CARES Act, but the department also needs the CCC account to make farm bill program payments to farmers in October.

One expert who follows the issue tells Agri-Pulse that USDA might need the account replenished again before the end of the year, even with an extra $20 billion in the aid package.

For more on the aid negotiations, including new requests for aid, be sure and read this week’s Agri-Pulse newsletter. We also have the latest on trade issues with China, plus a look at the farm policy issues in play in a key Senate race.

USDA: Congress may want to act on cattle market probe

A report on USDA’s investigation of cattle pricing practices is due out soon, and there will be findings that lawmakers may want to consider acting on. That was the word from Greg Ibach, USDA’s undersecretary for marketing and regulatory programs, at a House Agriculture subcommittee hearing on Tuesday.

Ibach didn’t give any clues as to what those findings might be. The investigation covers the impact on cattle prices of a Kansas beef plant fire as well as the COVID-19 market disruptions. 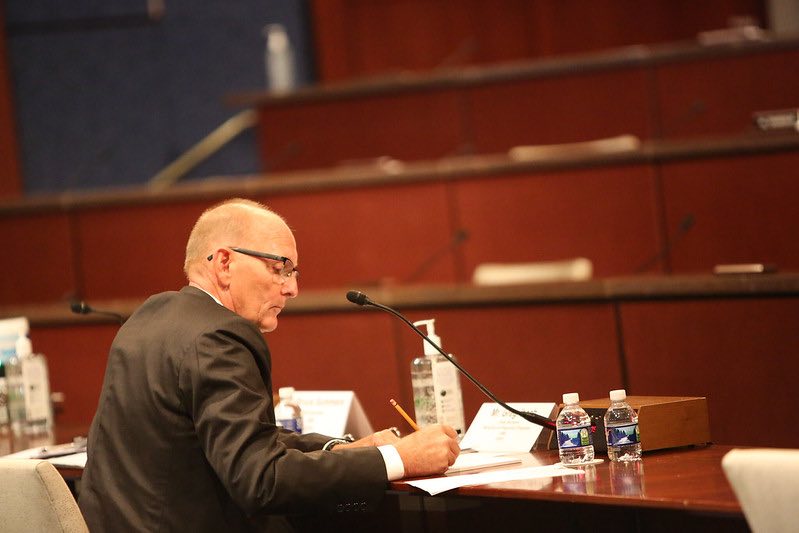 Despite continued criticism on Capitol Hill, Ibach says USDA will soon announce plans to solicit bids for a third round of Food Box deliveries that will likely total $500 million to $700 million.

Republicans on the Ag subcommittee praised the program for giving farmers a chance to sell fruit, produce, meat and dairy that might have gone to waste.

Democrats led by Marcia Fudge of Ohio said the program has suffered from a lack of transparency and oversight. “A program intended to feed the hungry that fails to operate consistently and equitably for all people across this nation, is unacceptable,” Fudge said.

Take note: Some 35.4 million boxes were delivered during the program’s first round, based on invoices USDA has received. The goal was 40 million.

The House is scheduled today to clear the Great American Outdoors Act, which would permanently authorize the Land and Water Conservation Fund at $900 million a year. Cattle and sheep producer groups unsuccessfully tried to stop the bill in the Senate, arguing it would give federal agencies free rein to acquire new lands.

President Trump is expected to sign the bill, which is a win for two vulnerable western Republican senators, Cory Gardner of Colorado and Steve Daines from Montana.

The House also will take up a four-bill, fiscal 2021 spending measure this week that includes funding for USDA, FDA, EPA and the Interior Department. The House Rules Committee meets this afternoon to consider what amendments will be considered on the House floor.

The House on Tuesday passed a defense reauthorization bill that includes provisions aimed at combatting rural suicides. The provisions, sponsored by Rep. Anthony Brindisi, D-N.Y., would direct USDA to develop a voluntary program for training agency employees in detecting and managing stress in farmers and ranchers.

USDA also would be required to convene a task force to assess the causes of and best ways to alleviate mental stress in farmers and ranchers.

Secretary of State Mike Pompeo met Tuesday with British Prime Minister Boris Johnson and Foreign Secretary Dominic Raab in London, and much of the conversation revolved around cementing a free trade agreement between the two countries.

Opposition in the U.K. to relaxing European-style barriers to U.S. poultry and beef remains strong, but U.S. Trade Representative Robert Lighthizer is adamant that those restrictions must drop during negotiations.

U.S. and British negotiators have already concluded two rounds of talk. The third will start later this month, Pompeo said.

The European Union has chalked up another victory in its efforts to secure food name protections for its cheeses, wines and other products around the world. The Europeans and Chinese this week finalized their deal to limit the usage of names of products such as Roquefort and Gorgonzola cheese and Prosciutto di Parma.

The EU and China agreed to restrict names, or “geographical indications” of 175 European and Chinese products four years after implementation of the deal.

The U.S.-based Consortium for Common Food Names expects limited damage to U.S. dairy producers, says Jaime Castaneda, executive director of the group. China had already promised to protect many of the names in the deal, he said.

Bayer, the seed and chemical giant, is kicking off a climate initiative this fall that will pay about 1,200 farmers in the U.S. and Brazil for keeping carbon in the soil.

Farmers would be rewarded for using practices such as no-till and planting cover crops. Bayer said it plans to expand the initiative to other areas.

Government, industry and nongovernmental organizations all have been placing more emphasis in recent years on the use of soil, specifically in agriculture, in the fight against climate change.

Say it ain’t so: No Hot Dog Day for the Hill

Today is National Hot Dog Day, which means it should be time and one of the more popular summer happenings on Capitol Hill. The best known brands in hog dogs set up shop at the Rayburn House Office Building courtyard to serve up lunch to lawmakers and congressional staffers.

But this year, that event can’t be held due to the pandemic. Instead 18 companies will be distributing a total of 325,000 hot dogs to food banks across the country. Boar’s Head, for example, will be supplying Mid Ohio Foodbank in Grove City, Ohio. Tyson Foods will be supplying food banks in Florida.

He said it. “They have been twiddling while America is burning in the resurgence of this virus.” – House Majority Leader Steny Hoyer, D-Md., complaining that Senate Republicans have not moved more quickly to pass a pandemic relief bill.