A bill for tracking outbreaks among farmworkers faces industry backlash

The Legislature has been advancing a measure that aims to better track COVID-19 infections among employees. While farm groups share this goal, the policy being proposed has drawn opposition from a broad coalition of agricultural and business groups. Time is quickly running out for the bill’s author to gather enough votes and win the governor’s approval before the end of session.

“It's a completely unworkable bill,” said Matthew Allen, who directs legislative affairs for the Western Growers Association. “We're doing everything we can to make sure that we maintain a safe workplace. We're not sure how this actually helps us get there.”

Assembly Bill 685 would require employers to notify all employees of a COVID-19 infection, along with state agencies and labor unions, within 24 hours of an outbreak. Labor unions are sponsoring the bill.

On Friday, Gov. Gavin Newsom said his office was addressing concerns that few counties have been tracking occupations as part of their testing protocols, which would provide more details on outbreaks.

“We’re working with the Legislature on tracking COVID infections in farmworkers,” he said. “We'll be making an announcement in that space on that issue very, very shortly.”

If the Legislature fails to pass a bill before the close of session at the end of the month, Newsom could issue an executive order mandating a statewide policy on infection notifications.

The bill’s author, Assemblymember Eloise Gómez Reyes of San Bernardino County, has until Thursday to work with industry groups on amending the bill to ensure enough moderate Democrats vote for the measure.

The bill has had just one truncated committee hearing since it was introduced in June.

“Every day our essential workers are risking their lives and the lives of their loved ones whenever they go to work to keep our state functioning,” said Reyes in that hearing. “Currently, employers must report fatalities and serious incidents. But it is only recommended that employers report infections.”

She argued AB 685 would introduce the “comprehensive reporting framework” needed for protecting workers.

“We view this crisis as fundamentally a worker safety crisis,” said Cailin Vega, a policy advocate for United Food and Commercial Workers Western States Council, which represents meatpacking plants and grocery stores. “Far too many workers are being exposed at the worksite either because they aren't getting access to the protective equipment they need or they aren't being told about an outbreak.” 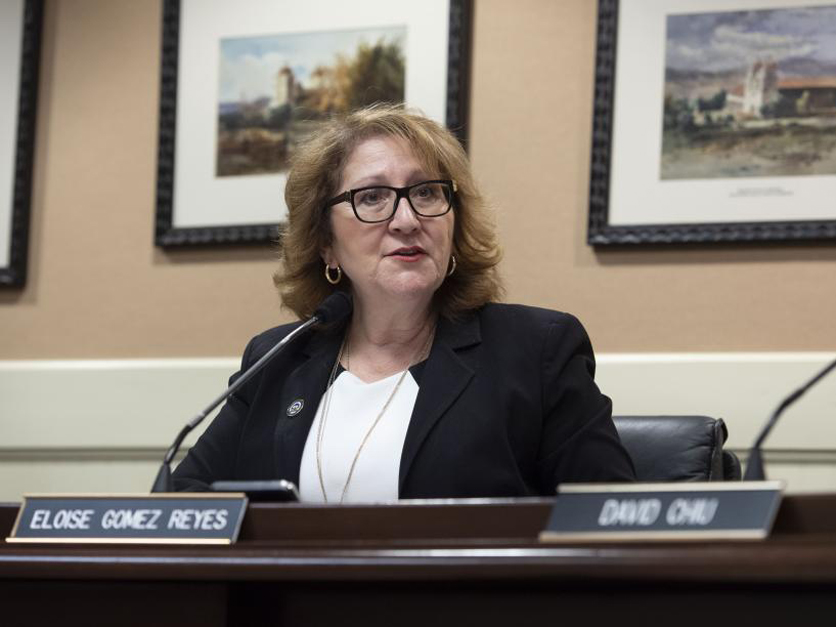 Opponents argue the bill is vague on determining whether an infection took place in the workplace or at home and on how employers would be able to notify all employees, state officials and unions within the 24-hour deadline before a penalty could be levied.

“This notification bill is very, very expansive and would make it incredibly hard on the agricultural employer to meet the requirements of the bill,” said Lauren Noland-Haijick, a policy advocate representing trade groups for citrus, fresh fruit and other commodities.

She said the bill raises medical privacy issues by publishing details of an employee’s infection and sharing that information broadly.

A clause in the bill prohibits employers from retaliating against employees diagnosed with COVID-19. This presents issues with seasonal farm labor in California, argued Noland-Haijick, since employees are let go after harvest.

Reyes added new amendments recently to require employers to provide guidance on how to quarantine, how to monitor symptoms and whom to contact for medical care.

Monterey County has served as a model for reporting infections among farmworkers, since it is one of only a few that track occupations when testing. The county does not disclose the names of businesses for those infections, but AB 685 would share that information.

“This isn't necessarily a case where public shaming and publication, we think, is warranted,” said Noland-Haijick. “You could be following every single guideline that Cal OSHA has put out there… and you still have a chance of it entering your workplace just because people are moving around the state and COVID is widespread.”

She added that the spikes in infections among farmworkers correlate to the state reopening the economy and the subsequent rise in case numbers and hospitalization rates.

“This is not back in March and April, where we had limited spread of the virus. Now it's community spread,” said Allen. “We feel like the employers are really shouldering the burden here.”

Rob Moultrie, a policy advocate for the California Chamber of Commerce, which is leading the opposition coalition, said the seemingly simple act of notifying fellow workers presents new challenges under a pandemic.

“Last year, you would have had probably a very large meeting and just told everyone at the beginning of the shift,” he said, asking Reyes if just a phone call or voicemail would be enough to comply.

Even phone calls and emails present challenges for farmworkers living in rural regions with inadequate cell and internet service.

Geoff Neill, representing the California State Association of Counties, said this could add to notification fatigue among workers, and the penalties on employers for not doing so could be painful.

“Even a single $10,000 fine in certain instances could force the closure of a business,” he said.

Allen said he has seen a similar “over-warning issue” with pesticide policies in “just providing notification just for notification purposes.”

“It's just going to lead to more confusion within the workforce itself and obviously more liability for employers,” he said.

Allen added that if the author “can't get these things right,” then the bill needs to be “parked” for the year and revisited in 2021.

Reyes, however, said she has been working with the Newsom administration “to ensure the bill is implementable” and cost effective.