Vice President Mike Pence used his acceptance speech from Fort McHenry Wednesday night to defend President Trump’s trade war with China, an issue Democrats are trying to use against the president in farm country.

Trump “stood up to China and ended the era of economic surrender,” Pence said.

“Joe Biden has been a cheerleader for communist China – wants to repeal all the tariffs that are leveling the playing field for American workers and actually criticized President Trump for suspending all travel from China at the outset of this pandemic.”

The latest forecast of U.S. ag trade is out from USDA and the news is decidedly mixed when it comes to China. Thanks to the growing demand for corn and soybeans in China, USDA estimates that U.S. ag exports will rise $5.5 billion to $140.5 billion during fiscal 2021, which starts Oct. 1.

But, but, but: Total agricultural exports to China are forecast at just $18.5 billion in FY21. That’s up from $14 billion in FY20, but the projected increase is nowhere close to what’s needed to meet China’s “phase one” commitment to buy $80 billion in U.S. farm goods over 2020 and 2021.

Pat Westhoff, director of the Food and Agricultural Policy Research Institute (FAPRI) at the University of Missouri, said the forecast “seems inconsistent with reaching the phase one targets.”

There’s this: The increase in China sales would preserve a small U.S. agricultural trade surplus for another year. Agricultural imports in FY 2021 are forecast at $136 billion, $4.3 billion higher than FY20.

Read our coverage of the report here.

Speaking of China, the Commerce Department announced Wednesday it is punishing 24 Chinese companies for their support of China’s efforts to build up artificial islands in the South China Sea, ratcheting up already tense relations between the two countries.

But conflict over the islands, COVID-19, Hong Kong and other issues doesn’t seem to be affecting agricultural trade. The USDA announced Wednesday another large daily sale of 400,000 metric tons U.S. soybeans to China. 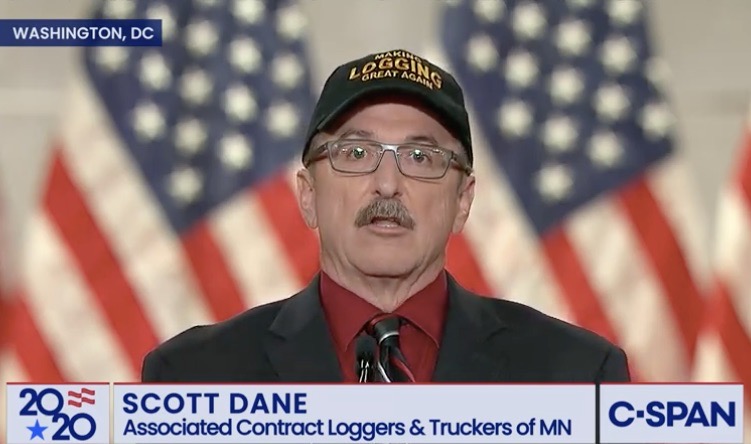 During Day 3 of the GOP convention, a Minnesota logger and truck driver credited President Donald Trump with reviving the forestry products industry in his region.

“Under President Trump, we’ve seen a new recognition of the value of forest management in reducing wildfires,” said Scott Dane. “And we’ve seen new support for our way of life—where a strong back and a strong work ethic can build a strong middle class.”

Iowa Sen. Joni Ernst continued the theme later in the evening. She praised Trump for killing and replacing the “punishing" “waters of the U.S.” rule, implemented when Joe Biden was vice president.

She also brought up ethanol, crediting Trump with approving the year-around sale of E15, “something the Obama-Biden administration failed to do in eight years.” (She didn’t mention the ethanol industry’s ongoing battle with the administration over small refinery exemptions from annual blending mandates.)

Pence asserted in his acceptance speech that Trump “rolled back more federal red tape than any administration.”

Keep in mind: Republicans are banking on economic issues to help win key battleground states in the Midwest.

Executives with some top food companies say they continue to face challenges in meeting consumer demand while keeping their employees healthy and plants staffed up during the pandemic.

Speaking on a Consumer Brands Association webinar, Richard Carlson, vice president of quality management for Hormel Foods, said one of the challenges the meat processor faces is training employees to continue social distancing when they’re off the job. (Hormel posts its training materials for workers on a special website, keepcovidout.org.)

Hormel is “seeing tremendous increased demand in product categories at a time when you're also trying to operate a manufacturing environment during COVID,” Carlson said.

Tom Culross, vice president of environment, health and safety for Conagra Brands, said that telling workers to stay home if they’re sick means companies have to start cross-training employees so they can fill in for absent colleagues.

And then there are the meetings: Culross said Conagra has a supply chain meeting every morning followed by a senior leadership meeting. At the end of the day, there is a call with each Conagra site to see what COVID issues may have developed.

A Black farmers group is suing Bayer, claiming the chemical giant put their lives and livelihoods at risk by downplaying the risks of Roundup and its active ingredient, glyphosate.

The company “did not provide the safety training necessary to use these products, meaning that Black farmers have, for decades, been exposed to dangerous chemicals that are becoming more and more dangerous with time,” says the lawsuit, filed in federal court in St. Louis.

The National Black Farmers Association is the plaintiff.

Bayer says that “racism has no place in our society or at Bayer” but portrays the lawsuit as a baseless legal maneuver by the two law firms that are handling it. Bayer says those lawyers “are holdouts in the Roundup product liability litigation, and people should see this action for what it is – an attempt by plaintiffs’ lawyers to use media and more litigation to further their own financial interests.”

Twenty-four senators led by Tina Smith of Minnesota and Republican Mike Crapo of Idaho are calling on USDA and U.S. Trade Representative to ensure Canada complies with the dairy import quotas set out in the U.S. Mexico-Canada Agreement.

Canada “cannot be allowed to administer TRQs in a manner that discourages utilization or restricts the ability of the U.S. dairy industry to completely fill the established TRQs at advantageous price points,” the letter reads.

The letter also asks the administration to enforce Canada’s elimination of Class 6 and 7 milk pricing classes and ensure Mexico carrels out commitment in two side letters on commonly used cheese terms.

He said it. “Can you imagine a UN organization running an advertisement for a Mercedes Benz car model? No?” - University of California, Davis, scientist Frank Mitloehner, commenting on a tweet by UN Climate Change, which praised Impossible Foods, a maker of plant-based meat products. The UN agency cited Impossible Foods’ claims about its reduction in greenhouse gas emissions compared to meat.