Home » “It is so terrifying”: Ranchers evacuate North Complex Fire, often without their animals
WEST

“It is so terrifying”: Ranchers evacuate North Complex Fire, often without their animals

For the third time in four years, Butte County rancher Megan Brown began evacuating her land on Sunday. As rising winds fanned the flames of the North Complex Fire, she assumed her ranch would burn again.

Brown spoke with Agri-Pulse as she readied a trailer to load the last of her dairy cows and calves. She ran her sprinklers, left a hose in a pig wallow to keep the free-range hogs alive, and hoped for the best. Her mother, who was scheduled for a major hip surgery, was using a water trailer to spray down the roof.

Brown has been on edge for more than a month. The original blaze, known as the Bear Fire, started in mid-August and was more than 50% contained last week. Then strong winds caused the fire to explode to more than 260,000 acres, grow into a complex of fires and become one of the top 10 largest fires in state history. Its boundary now stretches to the scarred remains of the Camp Fire, which destroyed the town of Paradise in 2018.

With the North Complex Fire, the death toll stands at 15.

It now threatens Brown’s ranch as well as her summer grazing grounds further up the foothills—yet another unprecedented situation in the ranch’s 90-year history.

“Once it blew up, we were pretty stressed,” she said. “We still haven't recovered from the Cherokee Fire of 2017.”

The fear has been palpable and will leave only when the fire is out, which could be months away, said Brown.

“In these situations, you can't control anything, and you don't know what's going to happen. It's really just this constant fear weighing over you. It's hard to sleep, it's hard to eat.” 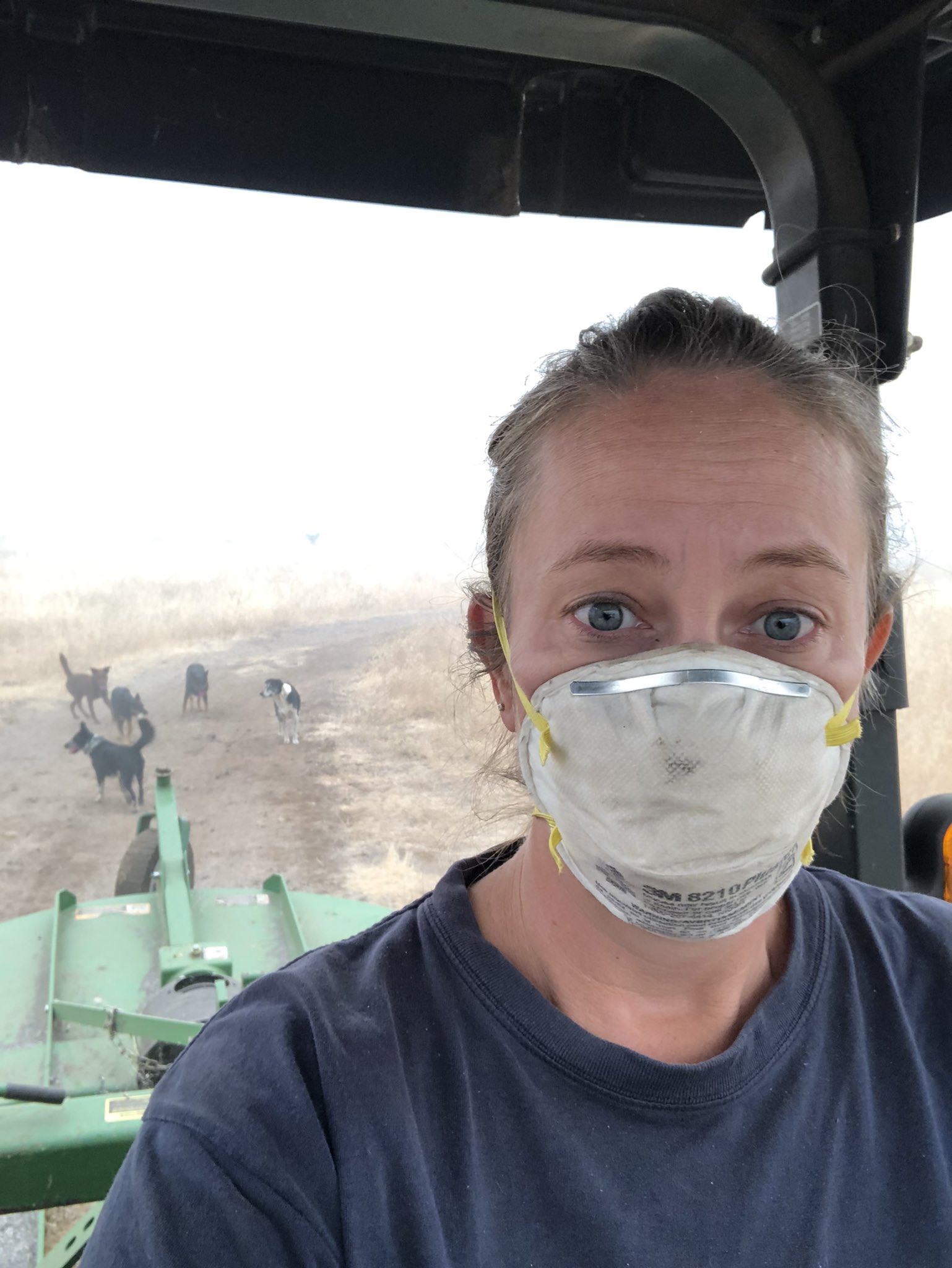 Megan Brown tends to her ranch with an N95 respirator on

While under the threat of evacuation, Brown stayed busy taking care of her family and her cattle, forgoing vaccinations and castrations as local veterinarians evacuated. So far, just one sow has died from smoke inhalation, adding to lung damage it likely sustained during the Cherokee Fire.

Since that time, Brown has dealt with drought, lack of feed, flooding and a “biblical” plague of grasshoppers, leading to painfully low cattle numbers this year—a “terrifying” situation as she takes over the family operation. Brown also feared for her life while trapped in a flash flood in 2017, when the Oroville Dam threatened to burst and nearly 200,000 residents evacuated.

“Nobody has experienced as many crises as we have here in Butte County,” said Colleen Cecil, executive director of the Butte County Farm Bureau. “We are a very resilient community and we'll come out of this one, too. That doesn't make any of them any less scary.”

Cecil explained that the North Complex Fire will impact summer grazing grounds most, though it is too soon for any damage reports. She expects losses of forage and fences.

Cecil reported that California Farm Bureau Federation President Jamie Johansson and his home are safe. Johansson and his family evacuated last week, though his farm has remained within a warning area and unscathed.

Butte County Agricultural Commissioner Louie Mendoza has heard of some livestock growers unable to reach their cattle, as they are grazing on U.S. Forest Service land near the Berry Creek side of the fire that is under evacuation orders. He said those growers are working with the sheriff’s office and fire chief to bring feed and water to those herds.

Should ranchers have a pass to rescue animals behind fire lines?
CalEPA reminds ag it is still enforcing pesticide restrictions near schools

Comparing the North Complex Fire to the Camp Fire, Mendoza said people have had much more notice to prepare this time.

“The Camp Fire started that morning and burned so quickly that by 10 o'clock at night it had burned all the way through the town of Paradise,” he said.

Rose Tryon, president of California Women for Agriculture and a rancher based in Crescent City but living in Paradise, remembers that day vividly. Her house burned down in the fire. In June, she finished rebuilding her home. 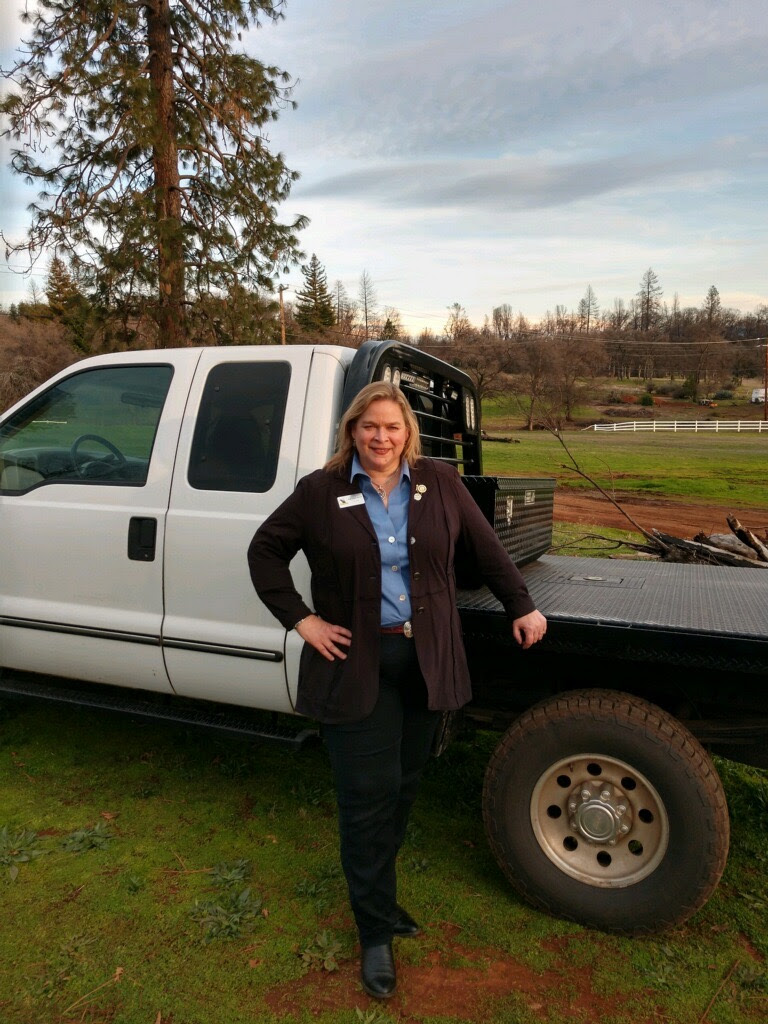 “When you stand outside your garage and you see the same sky and smell the same smoke as you did on November 8 of 2018, it is a bit jarring,” she said.

She and her husband packed their bags on September 9, her birthday, and waited for the evacuation call. Just a small part of Paradise fell under an evacuation warning that day though.

Tryon’s home is still surrounded by dead and dying trees. The process for removing them has been slowed by bidding and permitting processes, along with other red tape. She said the state needs to more actively manage the forests. If a fire struck the area, ranchers would have little time to gather their animals.

“If they give you an evacuation warning, don't wait, start to get your animals out,” she advises.

Tracy Schohr has maintained that type of communication with ranchers as the North Complex Fire has progressed. As a UC Cooperative Extension livestock advisor, Schohr has been working with emergency personal and county offices to evacuate cattle. It can take up to a week for a single rancher to gather a herd spread across a landscape.

Schohr is developing a process for performing a “rapid economic assessment” of the damage to ranches left by the fires. She said this could include forage that has burned as well as the hours spent moving cattle. She noted that some ranchers have lost cattle but are unable to access the ranch to assess the full damages.

“It's devastating to them," she said. "This is their livelihood and those animals they have raised from birth.”

Schohr and her colleagues last year published research on the impacts of fires on livestock, finding that water quality issues and ash fallen on forage did not have lasting impacts on the animals.

For Brown, the extra time to prepare made a difference. After evacuating her animals on Sunday and Monday, she decided to remain at home, but ready to flee as the winds kicked up on Monday night and threatened to expand the fire. By Tuesday afternoon, however, the gusts had dropped down, the smoke dissipated, and she could hear fire crews cutting a fire break behind the ranch.

“It feels like we’re in a much better spot now,” she said.