A source outside the agency said the announcement would be about dicamba but could not offer details on the decision.

But given the list of attendees, which also includes three Georgia congressmen, odds are Wheeler will announce EPA is approving dicamba formulations Xtendimax, Engenia and FeXapan for continued over-the-top use on cotton and soybeans.

By the way: EPA has proposed registering pesticide products containing a new active ingredient from Bayer CropScience called tetraniliprole, which the agency said is designed for use on a variety of crops, including corn, soybeans, tobacco, citrus and both pome and stone fruits.

“Tetraniliprole will be the first registered diamide Insecticide offering control of corn rootworm larvae in corn through soil application, and control of flea beetles in corn and potatoes,” EPA said.

“It would also be the first diamide offering control of wireworms in potatoes and similar crops, and control of cutworms in tobacco via soil application.” 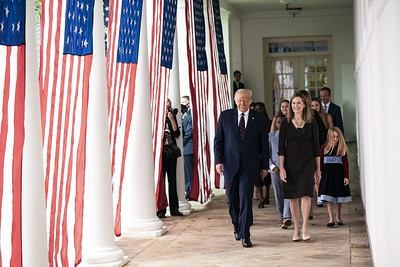 The Supreme Court now has a 6-3 conservative majority, which is likely to have some significant implications as regulatory cases make their way through the court system in coming months. Amy Coney Barrett was sworn in Monday night after the Senate confirmed her nomination, 52-48.

Maine Sen. Susan Collins was the only Republican who voted with Democrats to oppose seating Barrett.

One of the key issues to watch is how much leeway Barrett believes in giving federal agencies when it comes to interpreting laws that may be ambiguous. During her hearings earlier this month, Barrett declined to discuss her position on what’s called the Chevron doctrine, which holds the court should defer to agencies in interpreting laws.

By the way: The court will hear arguments next Monday in a case about whether the Fish and Wildlife Service must release draft documents related to its review process under the Endangered Species Act.

USDA has now paid out well over half the amount of money expected to be distributed in the second round of the Coronavirus Food Assistance Program, and more than 60% of the money is going to producers of three commodities – corn, cattle and soybeans, according to the latest weekly report.

USDA has made $2.2 billion in CFAP-2 payments on corn, about 29% of the total. Cattle producers have received about 22%, or $1.7 billion. The group of commodities that includes fruits and vegetables has so far accounted for just over 10% of the payments.

Nearly every crop or animal product is now eligible for CFAP-2, including hemp, whose producers have received $387,000 so far.

USDA has estimated CFAP-2 payments will eventually total $13.2 billion. So far USDA has made more than $7.6 billion in payments.

Brazilian farmers are surging forward in planting what’s expected to be another record-breaking soybean crop, according to a new report from AgRural, an agricultural consulting firm in southern Brazil. The planting pace is still a little slower than last year, but farmers appear to be making up for delays.

About 23% of the crop that will go on the market next year has been planted. Just a week ago that was 8%, meaning that farmers planted about 13.8 million acres in seven days, according to the report. And farmers in the southern state of Paraná are in the lead with 51% of their expected acreage planted already.

Planting is also pushing ahead at a fast pace in the Mato Grosso, Goiás and Mato Grosso do Sul, three of the biggest farming states in Brazil’s Midwest, says AgRural.

The World Trade Organization has given the final green light to the European Union to hit the U.S. with tariffs on about $4 billion worth of goods – including farm commodities such as frozen concentrated orange juice, walnuts and grapes – in retaliation for unfair subsidies to Boeing.

The U.S. once again argued in Geneva against the ruling, saying Washington state has already ended the subsidies that are core to the EU complaint.

While we’re at it: The U.S. has officially asked for an appeal to a Sept. 15 ruling against U.S. tariffs on China to punish the country for stealing intellectual property and technology.

China successfully argued that the U.S. was guilty of circumventing the WTO complaint process when it hit China with tariffs on $234 billion worth of its goods. The U.S. argued China would have never signed the “phase one” trade pact if the U.S. had not been so aggressive with tariffs.

By appealing the WTO ruling, the U.S. has essentially torpedoed the Chinese case because the WTO appeal court is not functioning. That is a direct result of the U.S. blocking the appointment of appellate court judges.

The supermarket industry’s latest survey of American consumers finds that many believe they are eating more healthful foods than they were before the COVID-19 pandemic. Some 44% of those surveyed during the first week of October said they were eating healthier now. Some 35% of shoppers said that in April and May.

The Food Marketing Institute survey also found that consumers continue to shop online even though stores are reopening. Online shopping now accounts for 37% of total weekly food spending, up 8% from July.

“The fact that the vice president is talking about American agriculture leading the way with net zero emissions is an indication for American leadership,” Vilsack told reporters on a campaign call Monday.

Vilsack said that includes ideas like paying farmers to sequester carbon from the soil, leasing land for windmills and converting agricultural waste into a variety of products.

Keep in mind: Rural voters also could help determine control of the Senate, including a pivotal race in Iowa where GOP Sen. Joni Ernst is battling for re-election.

She said it:  “I’m a farmer. I don’t want to go backwards because I know those were not always the good ol’ days.” – Former National Corn Growers Association President Pam Johnson said on the Biden campaign call Monday.