Earlier this year, Germany faced a $1 billion loss in access to pork export markets after a single case of African Swine Fever (ASF) was detected in a wild boar. The population of feral swine in the United States, estimated between 4-9 million, also poses a threat to export security.

If a similar event were to happen in the U.S., losses would likely be significantly higher, according to Dave Pyburn, senior vice president of science and technology of the National Pork Board. As different countries decide to react to ASF outbreaks in different ways, the potential losses in the U.S. would be sizable.

“Trade is never a straightforward process,” says Stephanie Shwiff, research economist for the National Wildlife Research Center. “Many factors determine the level of the ban and its duration, which therefore determines the overall economic impact of the ban.”

In the case of Germany, as a member of the European Union, the country did not lose trade within the European market.

“We don’t have that cushion to fall back on,” Pyburn said. “When you look at the economic models done by Dermot Hayes of Iowa State University, he estimates our industry would lose about $8 billion in that first year alone.”

The study also shows the losses could top $50 billion over 10 years and live hog prices could drop 40-50% to “clear the market of surplus pork that would otherwise be exported.”

The 2014-2015 highly pathogenic avian influenza (HPAI) outbreak can serve as a case study for what could happen in the pork industry. Prior to this event, the U.S. was the world’s largest producer of chicken and turkey meats and the second largest egg producer, according to the USDA-Economic Research Service report, "Impacts of the 2014-2015 Highly Pathogenic Avian Influenza Outbreak on the U.S. Poultry Sector."

After HPAI was reported, exports for poultry products declined substantially with over 50 countries restricting import of U.S. poultry products to some degree. In 2015, broiler export income decreased by 26% ($1.1 billion), egg exports dropped 13% ($41 million) and turkey exports declined 23% ($177 million). Some countries opted for blanket bans on all U.S. product, while some eventually adopted a more regionalized approach.

Exports currently make up about one-third of the national pork market, adding around $50 in value to each hog sold. A single outbreak could evaporate those markets and dollars overnight.

African swine fever is caused by a hemorrhagic virus, and infected animals succumb rapidly. According to Vienna Brown, a biologist with the National Feral Swine Damage Management Program, ASF has moved rapidly since 2018, from Eastern Europe and Africa to Asia and Western Europe. 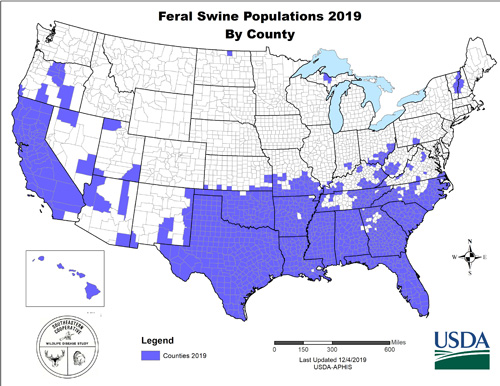 “The virus is very stable in a proteinaceous environment and as such, could be imported via swine products and byproducts from endemic regions,” she explains. “Feral swine are a particular threat because of their omnivorous, opportunistic diet, their gregarious nature, both intra- and inter-species; and their ability to move freely around the landscape.”

Many commercial swine herds are housed indoors with strict biosecurity measures, which greatly reduces contamination risk from feral populations. However, some producers house their animals outdoors, which puts those herds at the highest risk of direct contact with feral swine. In an outbreak, the infection could also spread through marketing points of congregation such as sale barns, and then move to new herds.

Since 2014, funding has gone to USDA's Animal and Plant Health Inspection Service for the National Feral Swine Damage Management Program. That initiative is managed by Dale Nolte, who says feral swine are present in at least 35 states and account for over $1 billion in damage annually.

“We know much more about feral swine than when the program first started,” says Nolte. “I think we’re on target to stop the population increase (since 2014), which will eventually lead to a decrease.”

Laws governing feral swine and their management vary by state, with APHIS supporting their Wildlife Services agents and eradication programs. The largest populations reside in the southeast region of the country, especially in states with favorable environments such as Texas and Florida. Through their efforts, five states have totally eradicated feral swine. In six others eradication is likely, with continued monitoring.

The National Pork Producers Council (NPPC) worked with USDA to obtain $75 million in funding as a part of the 2018 Farm Bill, which established the Feral Swine Eradication and Control Pilot Program. Part of this program involves testing dead feral hogs for ASF and Classical Swine Fever.

“NPPC appreciates these and other efforts by USDA to keep the U.S. swine herd protected from foreign animal diseases,” says NPPC Chief Veterinarian Liz Wagstrom. “Since an ASF vaccine is not available, prevention is our only defense. That's why continued vigilance is so vitally important.”