The Trump administration is unlikely to make a needed fix to tax regulations for farmer co-operatives, leaving many growers at risk of seeing higher tax bills, according to the National Council of Farmer Cooperatives.

NCFC already is reaching out to representatives of the incoming Biden administration to address the issue, NCFC President Chuck Conner told Agri-Pulse Tuesday.

At issue are regulations the Internal Revenue Service has been writing to implement the Section 199A tax deduction, an issue that became known as the "grain glitch" after the deduction was rewritten as part of the 2017 tax law. The IRS is expected to soon finalize regulations that would limit the deduction to patronage income, or income from co-op members. It would not apply to income from non-members.

"By making that overall deduction smaller by excluding non-patronage (income), we're going to be passing less back to the farmer. That translates into more taxes for farmers," Conner said.

Conner said applying the deduction only to member income would fall especially hard on members of co-ops that rely more heavily on buying commodities from non-members to ensure stability in operations. Dairy co-ops, for example, buy from non-member farmers to ensure they have a steady supply of milk.

Nationally, about 20% of co-op business is non-patronage, but the share varies between co-ops, according to NCFC. By law, 51% of NCFC business must be with members. 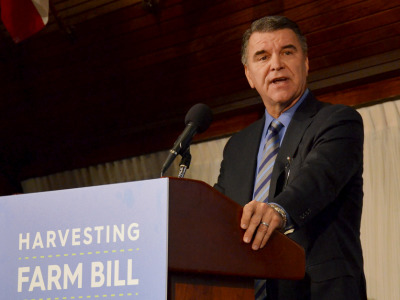 Arkansas-based Riceland Foods estimates the deduction would be worth $50,000 less per farmer in 2020 when non-patronage income is excluded.

Under previous tax law, the deduction applied to both member and non-member business. The deduction gets passed on to members, so the net effect of the pending IRS regulations is to increase taxes for some members. It's not known yet when the regulations would take effect.

NCFC officials had a 30-minute meeting with the White House Office of Information and Regulatory Affairs Dec. 30, but Conner wasn't optimistic it would result in a change to the IRS regulations.

"We're beyond flabbergasted that something that is going to result in higher taxes for farmers is even being taken seriously by this team that is on its way out the door," Conner said, referring to the Trump administration.