The last time a Democratic administration tried to pass climate legislation, in 2009, the bill died in the Senate partly because of resistance from farm groups. This year, one of the first significant climate bills a congressional committee is going to vote on is a measure backed by farm groups – the Growing Climate Solutions Act, which is aimed at facilitating the development of ag carbon markets.

Biden faces a tough task in convincing other world leaders that the U.S. is serious about reducing greenhouse gas emissions. The Senate Ag committee action is a small step in that direction, although it’s a long way from something like a clean energy standard or a carbon tax.

By the way: Sen. Ed Markey, D-Mass., and  Rep. Alexandria Ocasio-Cortez, D-N.Y., on Tuesday unveiled a piece of the Green New Deal – the Civilian Climate Corps for Jobs and Justice Act. The bill would establish a Civilian Climate Corps that would among other things be assigned with helping producers transition to “more regenerative farming and ranching systems.” 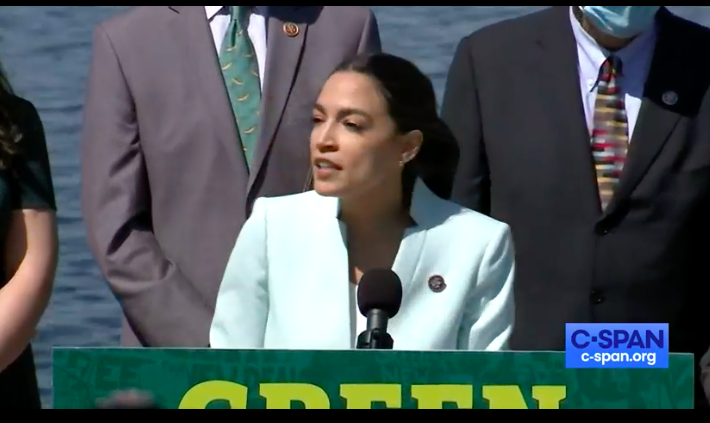 For more on details of the Growing Climate Solutions Act, read our story about the new version of the bill here, and watch for our weekly Agri-Pulse newsletter.

Conservation groups have come out strongly in favor of the Biden administration’s goal of conserving 30% of the nation’s land and waters by 2030, arguing that such a large-scale effort will put “tens of thousands of Americans to work.”

In a letter to Biden, more than 300 groups said “30x30” is “the bare minimum needed to recover imperiled wildlife, ensure clean air and drinking water, and buffer against the worst impacts of climate change.”

Keep in mind: Farmers are wary of the goal, afraid it might encroach on private land ownership. According to the Interior Department, about 23% of “America’s ocean” has strong protections, but that’s the case on only 12% of its lands. The conservation groups said they “look forward” to working with farmers and others as the effort moves forward.

A new study that the accounting firm EY conducted for a coalition of business groups says that repealing stepped-up basis would trim U.S. GDP by about $10 billion a year and reduce employment by about 80,000 jobs. By comparison, U.S. GDP in 2020 was about $21 trillion.

The study also says repealing stepped-up basis would reduce workers’ wages by $32 for every $100 raised in additional tax revenue.

Biden proposed during his campaign to eliminate the step-up in basis for inherited assets. Farm groups fear the idea could make it into the spending packages that Democrats will be putting together in the coming weeks.

Transportation Secretary Pete Buttigieg, who has been tasked with selling the Biden administration’s infrastructure package on Capitol Hill, says the administration is willing to consider funding mechanisms outside of corporate taxes or such ideas as repealing stepped-up basis.

Buttigieg tells Agri-Pulse that alternative revenue sources are welcome so long as they are “consistent with the president’s promise not to raise taxes on ordinary Americans … this is definitely the right time for folks with other ideas to bring them forward.”

He says Biden wants the package to “include all of America, and that certainly includes rural America.”

Biden is close to reaching the 100-day mark in office, and that’s when Sen. Chuck Grassley, R-Iowa, says he’ll start turning up the pressure for negotiations to begin on new trade agreements.

The White House on April 16 named Sarah Bianchi and Jayme White as two deputy U.S. trade representatives and Grassley said he’d impress upon them the need for strong agricultural provisions in any new trade deals. But he stressed he would prefer to have that conversation with USTR Katherine Tai or whoever is named as chief agriculture negotiator.

There are six positions at the Office of the USTR that must be confirmed by the Senate. That includes the USTR at the top and then, the chief agricultural negotiator, the chief innovation and intellectual property negotiator and three deputy USTRs. One of those three deputies is also the chief of mission in Geneva at the World Trade Organization.

A bipartisan group of 12 senators is urging EPA not to reduce biofuel usage mandates for 2021 and 2022.

One of the senators, Grassley, said EPA should set volumes of at least 15 billion gallons like the law requires. “The RVO for 2021 should include the court-ordered 500 million gallons which were illegally waived from the 2016 RVO,” he told reporters Tuesday.

Small refiners argued in a March letter RFS volumes should be adjusted to account for the Energy Information Administration’s projection that 2021 gasoline consumption will be roughly 132 billion gallons. That is 7.5% below pre-pandemic levels.

USDA is asking for public input on how stimulus funding should be used to address the resilience of the U.S. ag and food supply chains, according to a Federal Register notice being published today

Of particular interest are comments addressing local and regional food systems and “creating new market opportunities (including for value-added agriculture and value-added products), facilitating fair and competitive markets (including traceability and supply chain transparency), [and] advancing efforts to transform the food system.”

USDA also would like comments on ag workforce needs, nutrition security and the needs of socially disadvantaged and small to-mid-sized producers and processors.

She said it. “Do we intend on sending a message to the Biden administration to go bigger and bolder? The answer is absolutely yes.” – Rep. Alexandria Ocasio-Cortez, D-N.Y., on the need for a Green New Deal that goes beyond what Biden has proposed in climate policy.