As drought grips many of California’s prime agricultural areas, its two top-grossing crops are positioned well to pull through, much as they did during the last prolonged dry spell in the mid-2010s.

Grapes and almonds, which since 2004 have been the state’s top sellers, both have some natural drought tolerance thanks to their origins in the Mediterranean climate where recurring aridity is expected. But in California, their success is also tied to irrigation.

“We never get enough rain to supply enough water for grapes, for tree nuts,” said Roland Fumasi, executive vice president at RaboResearch Food and Agribusiness. When there’s not enough winter rain or snow to resupply water for irrigation, things get interesting. On March 23, the state announced some areas would receive as little as 5% of their annual water allocation from government managed water projects. By the end of April, 88% of California was in severe, extreme or exceptional drought, including most of the agricultural land, according to the U.S. Drought Monitor.

Fumasi said that leaves growers with three options: fallow some ground and shift water for those acres to ones that are in production, use more groundwater (if wells are reliable) or buy more surface water on the spot market if they can. But, he cautions, “they’re having to pay a lot more for that surface water.”

Immediately after the state’s allocation announcement, the spot water price jumped from $530 per acre foot to $686 and a month later stood at $869, more than $150 higher than the peak price in June 2020. For growers with a variety of crops, Fumasi says priority for water use will usually go to the highest value crop, which is likely to be tree nuts or grapes. He said at planting time, a grower may have some flexibility with annual crops, for example to switch to a melon variety that uses somewhat less water but can still be grown and harvested with existing equipment. It’s too soon to say how many changes like that farmers will make this year, but “in some parts of California that’s taking place.”

“You are reluctant to do it, but you can not plant those crops,” he said, “so that the water that would normally go there can go to your trees and vines that cannot go without water for a year.” 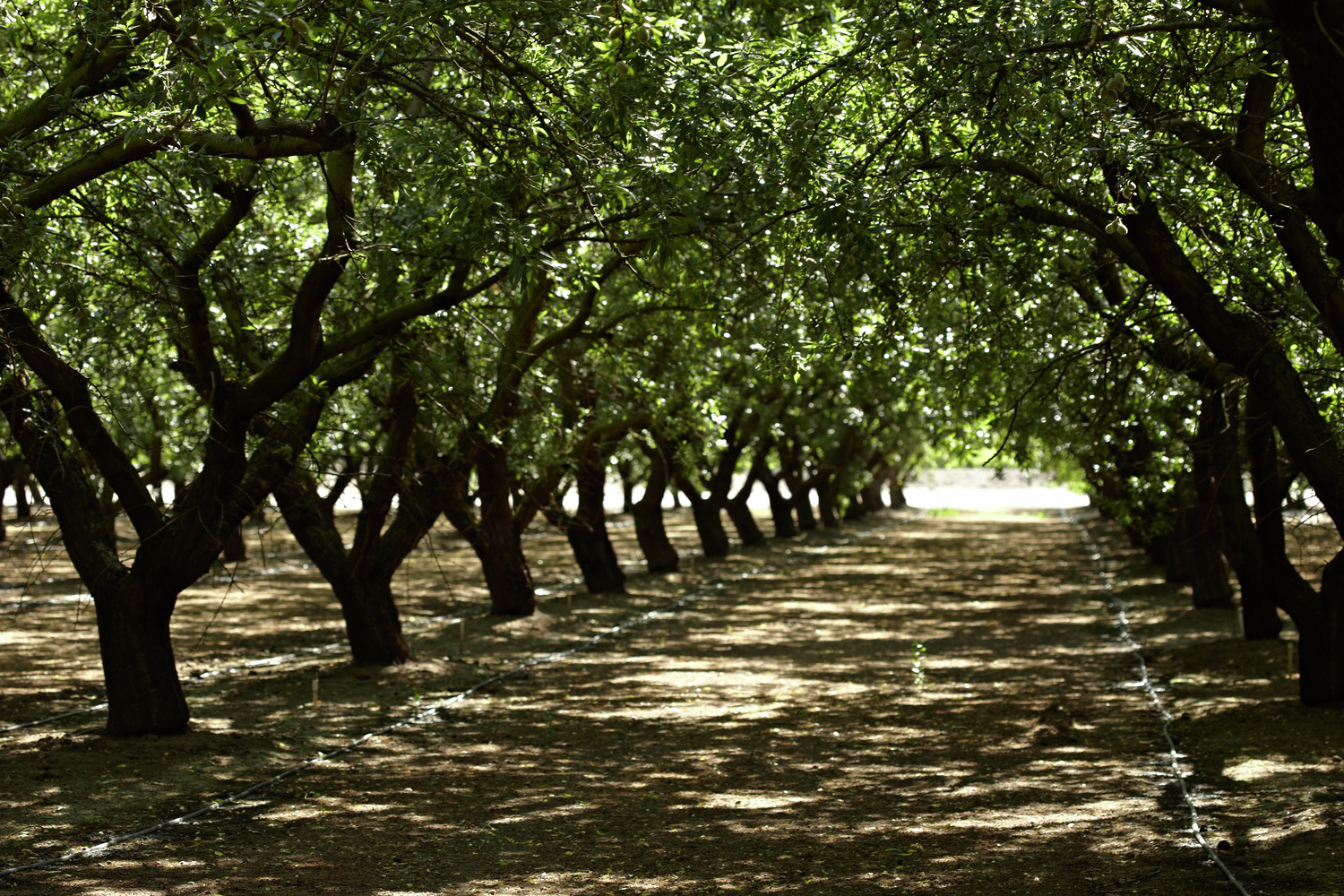 Almond trees prefer to get plenty of water, but a dry year doesn’t have to mean disaster for the grower.

“The trees themselves can actually survive,” said Gabriele Ludwig, director of sustainability and environmental affairs at the Almond Board of California (ABC), and the quality of the harvest is fine. But the year following the dry year, she said, “the yields become miserable.”

Industry and university researchers have studied how best to manage almond acres during droughts and Ludwig said one of the lessons learned from the 2012-2017 drought was that those recommendations had not reached all the growers who could use them. 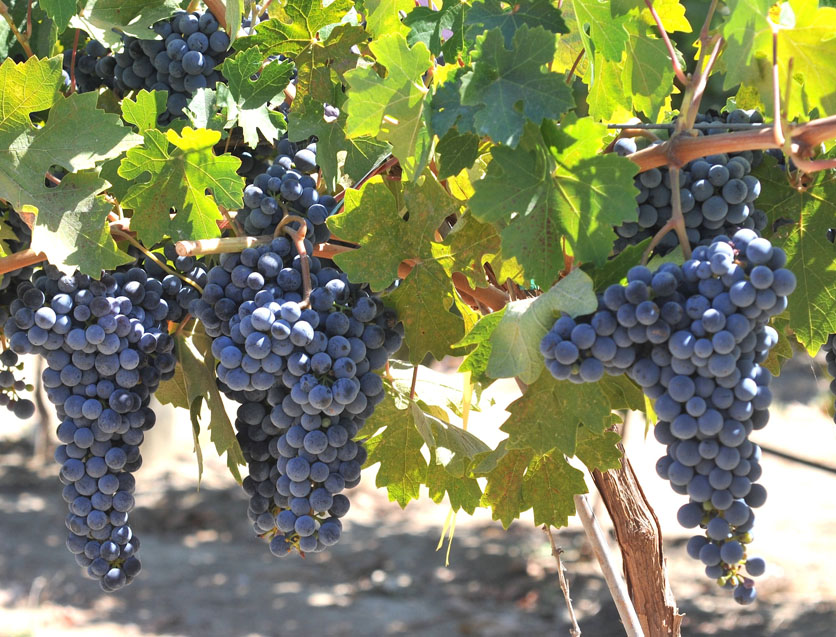 “There were opportunities to increase water-use efficiencies with the existing technologies,” she said. So ABC hired a team to increase outreach to growers on details like irrigating for specific soil types and careful monitoring of trees’ water needs throughout the day. In another study, ABC determined how a grower should distribute a limited amount of water. They concluded that whatever percent of your need you receive, you should apply that percent of normal water at all the times you irrigate, rather than shaking up your whole irrigation schedule. Ludwig says next they’re working on precision irrigation solutions. Another looming question is how best to manage almond acres in the season following a dry year. “How do you manage all of your other inputs if you’re not going to get much (yield)?”

As a high-value, permanent crop, grapes are also typically a top priority for irrigation.

“What we saw was actually at the height of the drought, yields increased a little bit because people were able to irrigate their crops,” said Kaan Kurtural, a cooperative extension specialist in viticulture at U.C. Davis.

Kurtural advises grape growers to install flow meters so that they can measure, rather than time, irrigation and know exactly how much water is getting to the vines. In current research, he said, “we’re trying to look at different trellising systems” that could use water more efficiently. Other research goals include identifying germplasm, rootstocks and different cultivars that can “take this heat a little bit better,” he said, to prepare for the future.

Milk is up, grapes are down in latest crop report
California continues to lead the nation in farm receipts

“What we’re now seeing is more periodic and extended periods of less rain that we normally got,” he said. “It’s going to be a tough season, no doubt about it.”

“We’ve got some vineyards that are taking out productive vines,” Merkley said, to install small ponds that can collect water “to carry them through these types of things in the future.”

Most indicators suggest grapes and almonds will continue to top California agriculture. 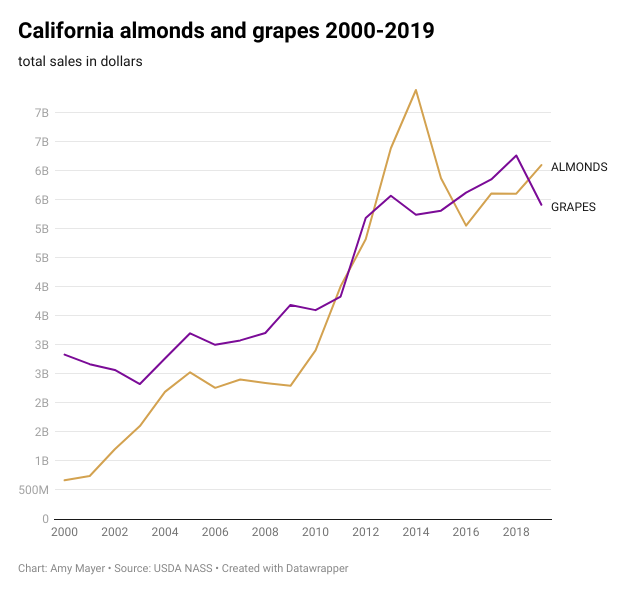 “For reasons around general economics and, again, water,” Fumasi said, “we expect to see a slowdown and maybe a plateauing of acreage” being converted to almonds over the next 5-10 years. But he added the rate of expansion was already slowing heading into the current dry period. He said table grape acreage has also been declining, though labor costs are a significant factor in that change.

A major difference for California agriculture between the start of the last drought and the current situation is the implementation of the Sustainable Ground Water Management Act.

“Just because the Sustainable Groundwater Management Act passed in 2014, doesn’t mean we can’t pump groundwater,” Fumasi said, noting that agriculture will use more this year.  But it does change the dynamic and the political climate.

“We’re currently working on a groundwater management guide for growers just to say, ‘these are your options,’” Ludwig said. But the ABC is also exploring how orchards might play a role in groundwater recharge during flood years, she said, by evaluating where and when conditions in certain almond orchards might be appropriate for flooding.

Merkley, who has worked for the state Water Board and also been critical of it, says that even though droughts tend to attract a lot of attention, California’s climate is also characterized by recurring floods and he wants to see the state ramp up its ability to hang onto that water and use it for agriculture.

Longer droughts, he says, are going to be punctuated by heavy rainfall and snowfall years. “We’ve got to take advantage of these ‘in-betweens’ and it’s just hard to do,” he said, in the current regulatory environment. He estimates as many as a million acres could be idled this year because of drought conditions “and this could have been avoided had the state done a better job of preparing after the last drought.”