California ranchers knew months ago they were in for another dry year, and as drought grips most of the state, how a particular area’s conditions are labeled by the U.S. Drought Monitor could be a factor in whether, or how well, some ranches survive.

Dan Macon, a livestock and natural resources adviser with U.C. Cooperative Extension in Placer, Nevada, Sutter and Yuba counties, says there is “a lot of frustration beginning to build with the drought monitor’s inability to really understand on the ground conditions in California.”

He says the state is very different from most of the country, and the categories the mapmakers use to distinguish the degrees of drought aren’t adequate in his area.

One reason the classification is so important is that the USDA Livestock Disaster Program bases payments in part on the drought monitor rating. The difference between D3 and D4 could, in certain circumstances, reduce a rancher’s eligibility by one month’s worth of payments.

Beyond California, this year’s drought is affecting much of the southwest and northern Great Plains. South Dakota Republican Sen. John Thune sponsored legislation to improve the accuracy of soil moisture and snowpack data for the Upper Missouri River basin, which passed as part of the year-end spending bill in December.

In a statement to Agri-Pulse, Thune said because USDA’s disaster relief programs are critical for producers’ recovery from drought, he will “continue pressing the department to ensure its agencies carefully coordinate and fully utilize all available drought-related data when administering these programs.”

Leslie Roche, a U.C. Davis extension specialist in rangeland science and management, said over the past few years, she and colleagues have been “building stronger relationships with the drought monitor authors,” including by helping gather more data from extension agents in California.

“It is incredibly amazing how much information they take in and process on a weekly basis,” she said, but ultimately there is a human behind those severity labels and that can mean “pretty subjective decisions.”

Nevada, Utah, Arizona, New Mexico, Colorado and North Dakota have significant D4 areas, while the drought monitor says nationwide 43% of the country is in drought, affecting 75.3 million acres of crops.

Before ranchers start thinking about any possible disaster payments, though, they are doing their best to get through this season. For Ryan Mahoney, who has cattle and sheep in the Montezuma Hills between Sacramento and San Francisco, that means selling. He says a road across Solano County that separates his northern and southern pastures is serving as a de facto dividing line.

“Our ground south of Highway 12, we’re depopulating the cows 80%,” he said, while north of that line there was a little more rain and he’s only selling off 20-30%. Because sheep are smaller, they’re easier to move and don’t require as much food and water. “They’re able to dig and pick and get more seeds and different things,” he said, and he can also turn them out to graze on failed grain crops. But the market for sheep is strong, so selling them makes good business sense right now.

With the cattle, he’s worried not only about low sale prices and the capital gains he’ll owe, but the impact into next year. “The real hurt of this drought is going to be next year, financially,” he said. He’s the fifth generation at Emigh Livestock, though, and he says the family has prepared for drought. “We’ve been aggressive in acquiring irrigated pasture,” he said, and even with the need to sell this year, he said his grandfather taught him to “be patient, don’t react drastically but move forward strongly.”

In late winter and early spring, when already they knew it would be a dry year, Mahoney said his grandfather said “over his entire life, the Montezuma Hills have never failed him.” And then almost no spring rain came. Mahoney says, typically “it’ll tend to be green until June 1. This year we were turning brown April 10 and we were completely out of feed May 1.” His grandfather, who will be 93 in August, said it’s the driest he’s seen in his lifetime. Despite the headwinds, Mahoney is confident the ranch will survive. 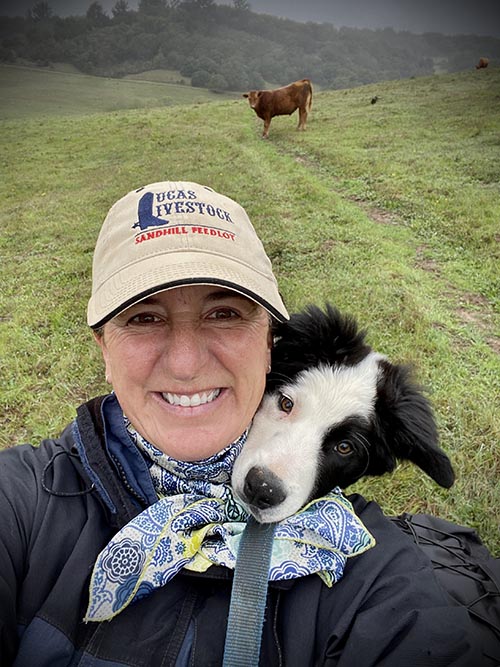 Conditions are slightly better in Monterey County, thanks to the coastal fog and cooler temperatures, said rancher Celeste Settrini, who runs a cow-calf operation with her brother. Over the past eight years or so, she said they’ve shifted to smaller cows and bred for lower weight calves, which reduces the feed demand and has been one strategy to prepare for dry conditions. They also rotationally graze their animals, maintaining some fallow ground that can be used in years like this one. Still, they kept back heifers from the sale barn and culled some of their older, bigger cows to further reduce foraging. Settrini said they’ll also be buying hay.

“It’s going to be a tough year in the sense that hay is going to be a lot more expensive, too,” she said, as suppliers in the Central Valley may have to buy water. Settrini knows she’s in a better situation than many California ranchers this year, especially those who can’t afford to buy hay.

Macon, the extension agent in the foothills, said ranchers trying to feed their way out of drought often find it’s only a way to “lose money more quickly.”

In Settrini’s work doing marketing for cattle barns, she’s seen a lot of livestock coming through from farmers and ranchers who will try to cut their losses with whatever price they can get now. But then they’ll have to start rebuilding their herds if things improve next year.

Settrini said she and her brother want to avoid that. They stand firm on the size of their herd, which is about 200 mother cows. When times are good, she often receives unsolicited advice to buy more, “but we’ve never really done that,” she said, because “we just kind of plan for a rainy day, I guess, or a not rainy day.”

This year, that’s the investment that’s paying off.