Senate Agriculture Chairwoman Debbie Stabenow is expressing optimism that the Senate will pass the Growing Climate Solutions Act today. But the Senate will first debate an amendment by Utah GOP Sen. Mike Lee that would weaken a critical provision of the legislation, which is intended to speed development of ag carbon markets.

The bill, which has more than 50 Senate sponsors, would put USDA in charge of certifying technical advisers and carbon credit verifiers. Lee’s amendment would instead authorize USDA to publicize “common practices and common qualifications” of technical advisers and credit verifiers. Stabenow told reporters the amendment would “gut the purpose of the bill.”

Senate approval of the bill will send the measure to the House.

The U.S. Supreme Court today will consider whether to take up the meatpacking industry’s petition for review of California’s Proposition 12. The case focuses on the initiative’s prohibition on the sale of pork and veal unless those products are raised in accordance with the law’s animal welfare requirements.

The court is expected to announce Monday whether it intends to consider the appeal. The case has implications for farmers whose meat is sold in California no matter where it’s produced.

The North American Meat Institute argued in its brief that the rules will increase sow mortality without benefitting consumers.

The decision was a defeat for the United Farm Workers and the United Food and Commercial Workers Union, which supported the California regulation. 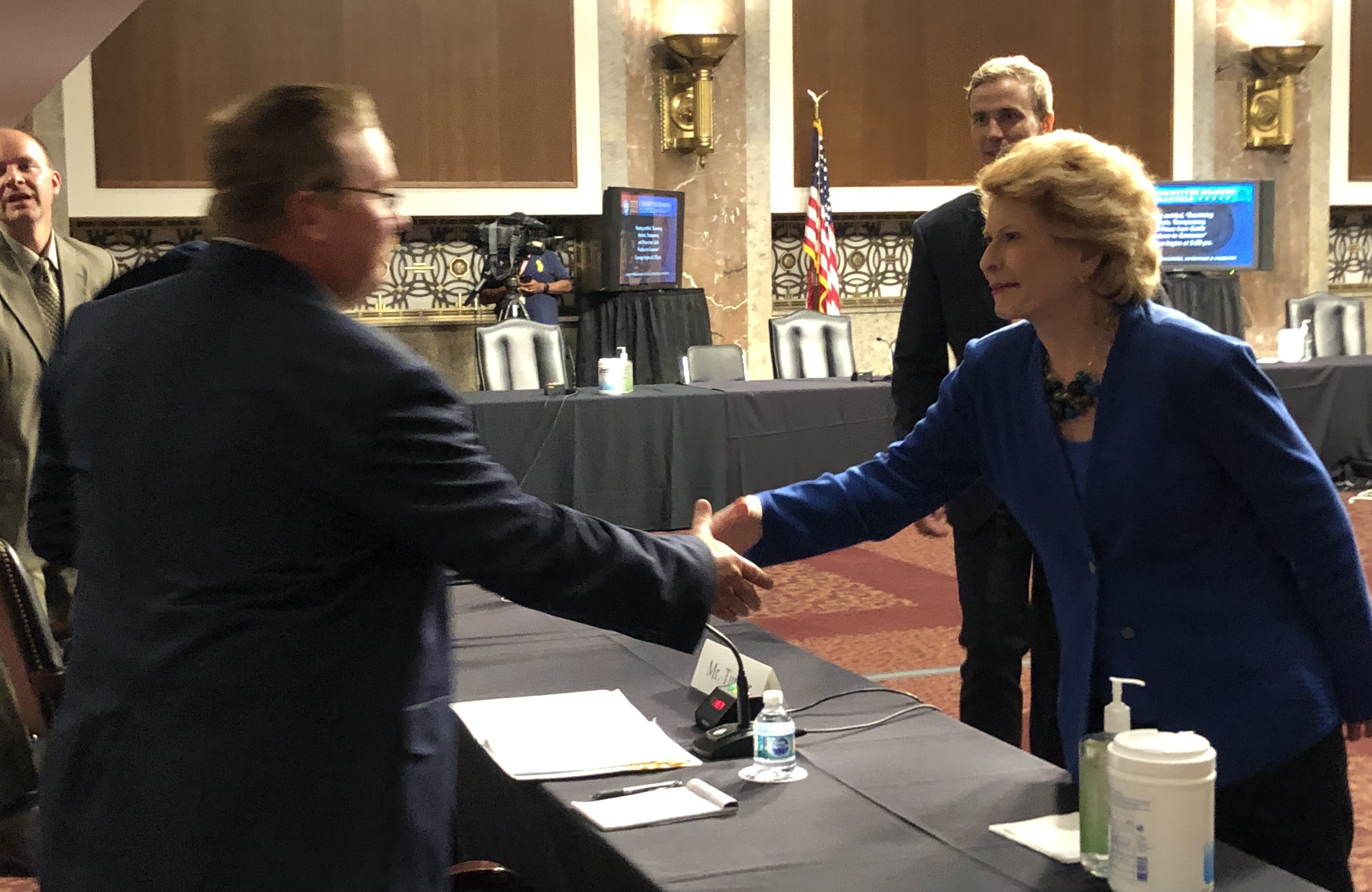 Stabenow not ready to talk next steps on cattle pricing

The Senate Ag Committee held a long-awaited hearing Wednesday on cattle markets, but Chairwoman Stabenow told reporters afterward there’s still division in the industry over the issue and it’s too soon to say what the panel will do legislatively.

“We really just need to get (committee) members together to talk at this point,” she said. Still, she said the hearing showed “there is a lot of real concern” among committee members “about the consolidation in the industry.”

The top Republican on the House Agriculture Committee, Glenn “GT” Thompson of Pennsylvania, says he’s willing to discuss a permanent disaster program. But Thompson said at a subcommittee hearing Wednesday that the program would have to meet three standards, including that it wouldn’t compete with crop insurance.

The program also must be easy to implement and able to respond quickly to disasters, he said. "If Chairman (David) Scott is willing to work within those three principles, I want to work with him to craft the best policy possible,” Thompson said.

During the hearing, Scott got support for a permanent program from fellow Georgian Sanford Bishop, who chairs the House Ag Appropriations Subcommittee. “We need to have a rainy-day fund or interest-bearing account set aside” for disaster aid, Bishop said.

Georgia farmer Wes Shannon told the subcommittee that it takes too long for farmers to get assistance from temporary, ad hoc disaster programs.

More than 50 Republicans have formed a Conservative Climate Caucus that’s intended to give the GOP a voice in shaping climate policy. The caucus includes at least seven members of the House Agriculture Committee, including ranking member Thompson.

Also in the caucus is West Virginia Rep. David McKinley, who is reintroducing a bipartisan bill to create a clean energy standard. The bill would require utilities to reduce carbon emissions by 80% by 2050, a much longer glide path than President Joe Biden wants.

“Proposals to reduce emissions and be good stewards of the earth do not have to hurt the American economy – in fact they do the opposite,” said Rep. John Curtis, R-Utah, who is chairing the caucus.

China is getting an early start on purchasing new crop soybeans from the U.S. this year. The Chinese committed to purchases of 330,00 metric tons of U.S. soybeans for delivery in the 2021-22 marketing year, USDA said Wednesday.

That followed a Monday announcement of a 336,000-ton purchase, also for 2021-22, although that may have been even bigger. The Monday report also included a U.S. export sale of 120,000 tons, but that was listed as going to “unknown destinations.” Analysts say they suspect it was also for delivery to China.

Cindy McCain, wife of the late Sen. John McCain, R-Ariz., has been picked by President Biden to be the U.S. ambassador to the UN World Food Program and Food and Agriculture Organization.

Meanwhile: Homer Wilkes has been picked as USDA’s undersecretary for natural resources and the environment, a position that oversees the Forest Service. He currently directs USDA’s Gulf of Mexico Ecosystem Restoration Division.

USDA’s Animal and Plant Health Inspection Service says the crop developed by Agrivida Inc. doesn’t pose a plant pest risk and won’t have much impact on corn acreage. Only about 10,000 acres of the corn would be needed.

The public comment period on the draft documents ends July 26.

Interior Secretary Deb Haaland assured Utah Republican congressman Blake Moore on Wednesday that she had “taken to heart” comments she received from ranchers in the state about the potential expansion of the Bears Ears National Monument.

Haaland recently delivered confidential recommendations to Biden to restore national monument protections to millions of acres of land in Utah that the Trump administration had removed from both Bears Ears and Grand Staircase-Escalante.

“I have a family of ranchers as well,” Haaland told Moore at a House Natural Resources Committee hearing on the Interior department’s fiscal 2022 budget. “I understand how they feel about the land … all those comments did absolutely figure in.”

She said it: “Our public lands belong to every American, and so we want to make sure that this beautiful, cultural and historical place that can offer so much to future generations stands.” – Interior Secretary Deb Haaland.