The nominee to lead the Bureau of Land Management, which manages about one of every 10 acres of surface lands in the U.S., will get a vote Thursday in the Senate Energy and Natural Resources Committee after months of debate over her role in the spiking of trees on a national forest in 1989.

Tracy Stone-Manning, who has worked as a regional director in Montana for Sen. Jon Tester, D-Mont., and as director of the Montana Department of Environmental Quality, also headed up an environmental group in the state and, most recently, has been the National Wildlife Federation’s associate vice president for public lands and a senior adviser.

She has the backing of dozens of local and national conservation groups, who have continued to support her as Republicans on the committee have accused her of not being truthful about her role in the investigation of the tree spiking.

But Sen. Joe Manchin, the West Virginia Democrat who chairs the committee, has now come out publicly in support of the nomination, which is opposed by all the Republicans on the panel. With the backing of all committee Democrats, Stone-Manning’s nomination would go to the Senate floor, where Democrats could confirm her with just 50 votes and rely on Vice President Kamala Harris to break a tie vote.

Since her confirmation hearing on June 8, Stone-Manning has been embroiled in controversy over the tree spiking, which resulted in two environmental activists receiving jail time. As a 23-year old graduate student, she wrote a letter to the Forest Service on behalf of one of the activists - an act she described as a way to warn authorities. Stone-Manning testified against them in 1993 in return for immunity from prosecution. No one was hurt by the effort to drive 500 pounds of metal spikes into trees in the Clearwater National Forest, and Stone-Manning said in answers to written questions from committee members she had not been involved in the tree spiking and "I do not condone tree spiking or terrorism of any kind."

Tree spiking has been used by some activists as a way to damage the saw blades of loggers and make it too costly to cut down trees. But the spikes can also harm or kill loggers.

"We will continue to support this nomination,” said Ben Gabriel, executive director of Wild Montana. “And we also believe it's really important that the BLM has somebody in a leadership position.”

Gabriel said “we know that the morale at the Bureau of Land Management is down … and there are a lot of resource management plans and other issues” that BLM needs to tackle.

Tester, who hired Stone-Manning and made her the director of his Missoula regional office, said in introducing her at her confirmation hearing that she “exhibits uncommon common sense” and would be the “perfect choice to head BLM.”

Stone-Manning herself told the committee she planned to take into account science and input from all sides in debates over federal oil and gas leasing and “multiple use” of BLM lands, which is mandated by federal law.

“I believe that activities like grazing and timber management, when carried out responsibly, can result in positive conservation benefits on public lands,” she said in written answers to the committee. She also said there is “plenty of room” for oil and gas development on federal lands and committed to following the law if confirmed.

But committee Republicans remain staunchly opposed to her nomination. In an op-ed Monday in USA Today, John Barrasso, the committee's ranking member, said Stone-Manning lied about her role in the tree spiking investigation, saying she had not been a target of it.

Barrasso, R-Wyo., pointed to a letter from a former Forest Service investigator who said Stone-Manning had not cooperated with the investigation, despite her having sent a letter in 1989 warning that trees had been spiked.

He also said she was a target of the investigation, an allegation disputed by the lead prosecutor on the matter, who told The Associated Press he could not recall her receiving such a letter. He also said “everybody was satisfied” with the two convictions that were obtained.

Stone-Manning’s involvement in the incident has been “vetted for years and I think that it's kind of shifted into a smear campaign,” Gabriel said.

The administration has continued to back her nomination, with Interior Department spokesperson Melissa Schwartz disputing the account of the Forest Service investigator. White House press secretary Jen Psaki on Monday said President Joe Biden "stands by his nominee and looks forward to her getting confirmed."

Besides the tree spiking, some on the committee have questioned Stone-Manning’s commitment to the Trump administration’s move of the BLM headquarters from Washington, D.C., to Grand Junction, Colo. After the move was announced in 2019, she called it “an expensive and unnecessary relocation” and said it was “as irresponsible as it is ill-advised.” She was serving at NWF at the time. 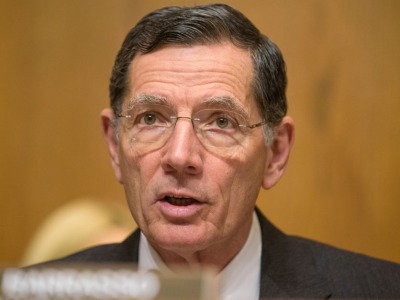 Sen. John Hickenlooper, D-Colo., said at her hearing that only about 40 of more than 300 BLM headquarters employees made the move out west, and asked her to consider the concerns of people in Grand Junction, who had been hoping the relocation would result in a boon to their local economy. Stone-Manning promised to do so but said she could not comment on BLM’s ongoing review of the move.

On grazing, Stone-Manning said at her confirmation hearing she would work to shorten the time it takes for ranchers to receive permits, pointing to a visit she had with livestock managers where she learned that some had permits that were 15 years out of date.

Stone-Manning’s nomination has the support of two former BLM directors, Jim Baca — who served in the post from 1993-1994, during the Clinton administration — and Neil Kornze, who led the agency from 2014-2017 under President Barack Obama.

In an op-ed in the Salt Lake Tribune, they said her experience has prepared her well for the job, noting in particular her position as chief of staff to Bullock, where “she shared responsibility for the successful operation of the entire state government and its 11,000 employees. “People across the spectrum see Tracy as someone they can work with, and the BLM’s ‘multiple-use and sustained yield’ mandate requires exactly the type of collaborative approach that she has been known for throughout her career,” they said.

But Bob Abbey, another Obama administration BLM director, told Agri-Pulse the information that has come out about her role in the tree spiking incident should disqualify her from consideration.

“Given Ms. Stone-Manning’s past, I doubt if she would have ever been seriously considered for the chief of the [U.S.] Forest Service even though that position does not require Senate confirmation,” he said. “The Biden administration and the Department of Interior should have applied a similar standard when considering candidates for the BLM’s leadership position.”