It’s a huge week ahead on Capitol Hill. Congress must act to keep the government from shutting down when the new fiscal year begins on Friday.

Democratic leaders plan to bring the infrastructure bill to the House floor today, but Pelosi told ABC News on Sunday the House vote could come later in the week.

She also conceded that the $3.5 trillion reconciliation bill that the House Budget Committee approved on Saturday is likely to be scaled back. “That seems self-evident,” she said. Key Senate Democrats have refused to support a $3.5 trillion bill. 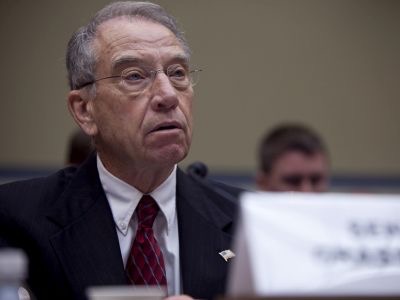 Sen. Chuck Grassley, R-Iowa, has made it official: He’s running for another term in the Senate. Grassley, who turned 88 earlier this month, was first elected in 1980. Only Pat Leahy, D-Vt., (elected in 1974) has been in the Senate longer.

"As a farmer, I live life by a simple code: you keep working until the job is done,” Grassley said in a statement to supporters. “When you look at Washington today, you can see there is still a lot of work to do.”

Take note: Grassley has long been one of the most accessible senators to the news media. He holds a conference call with reporters on ag policy nearly every week of the year.

USDA takes next step to shield US from ASF

USDA has informed the World Organization for Animal Health, or OIE, of measures it’s taking to protect the U.S. mainland from African Swine Fever in a new protection zone in Puerto Rico and the U.S. Virgin Islands.

ASF, the infectious and fatal swine disease, has been detected in the Dominican Republic and Haiti, but not in the nearby U.S. territories. APHIS suspended imports of pork and pork products from the territories on Sept. 17.

APHIS said now that it has submitted the report establishing the protection zone, it will “work to confirm that individual countries recognize and accept the zone. APHIS is confident that its many existing preventive measures and mitigations … will protect our livestock industry from ASF and ensure the continued export of pork.”

Lighthizer helped former President Donald Trump wage a trade war against China that resulted in Chinese tariffs on U.S. farm commodities and massive U.S. subsidies to make up for the losses. Lighthizer also led the talks that resulted in the “phase one” trade agreement, under which China has temporarily put many of those tariffs on hold.

Lighthizer, in a statement Friday, highlighted his former role as USTR in confronting China and renegotiating the North American Free Trade Agreement.

“At AFPI, I hope to continue to advance this new paradigm and continue the transformative policies we championed during the Trump Administration,” he said.

Farmers who sell corn to Dakota Ethanol in South Dakota could get a 40-cent-per-bushel premium for their corn if they use certain conservation practices, according to the American Coalition for Ethanol.

“We’re kind of hoping for that through the marketplace but we’ll have to see how that plays out,” ACE CEO Brian Jennings told Agri-Pulse after USDA announced ACE and its partners would get $7.5 million in a Regional Conservation Partnership Program grant to promote no-till and other soil health practices near the farmer-owned plant in Wentworth, South Dakota.

Jennings noted the calculations are based on prevailing carbon credit prices in California. “Project partners including South Dakota Corn Growers will incentivize climate-smart practices; quantify, verify and model the resulting soil health benefits; and use this data to secure participating farmers access to Low Carbon Fuels markets,” according to a USDA summary.

A new lawsuit challenges the EPA’s recent re-approval of paraquat, a herbicide that is the subject of numerous personal-injury lawsuits across the nation.

The herbicide is banned in 32 countries, including member states of the European Union, the Center for Biological Diversity and other groups said in filing the lawsuit in the U.S. Court of Appeals for the Ninth Circuit. They claim scientific studies strongly link exposure to paraquat to neurological harm, including Parkinson’s disease.

In reapproving it for use in August, EPA said, “After a thorough review of the best available science … EPA has not found a clear link between paraquat exposure from labeled uses and adverse health outcomes such as Parkinson’s disease and cancer.”

Paraquat registrant Syngenta says the company has invested“hundreds of millions of dollars in improving product formulations and safening methods for use of paraquat which involve no direct human contact.”

She said it. "We got stuck with some stupid arbitrary deadline of Sept. 27, which is no different than Oct. 3 or Oct. 10." – Rep. Pramila Jayapal, D-Wash., complaining to reporters on Friday about the deal to put the bipartisan infrastructure bill on the House floor by today.

Jayapal and other progressives are refusing to support the legislation until they are satisfied that a larger budget reconciliation measure is going to pass the Senate.

Correction: Because of an editing error, American Coalition for Ethanol CEO Brian Jennings was misquoted in Monday’s Daybreak. Farmers who sell corn to Dakota Ethanol in South Dakota could get a 40-cent-per-bushel premium for their corn if they use certain conservation practices, ACE said.