Ag Secretary Tom Vilsack today will announce some new spending on climate policy and to deal with market disruptions and animal disease prevention. Vilsack is making a speech on climate issues at Colorado State University today.

USDA has more than $7 billion left in its Commodity Credit Corp. account to spend before the new fiscal year starts on Friday, so there is plenty of money available for what’s being announced today, a knowledgeable source tells Agri-Pulse.

The USDA debt relief provisions that congressional Democrats are trying to finalize could cost as much as $11 billion, according to a cost estimate obtained by Agri-Pulse. That cost would be partially offset by $5 billion in savings from rescinding a debt relief program enacted in March for minority farmers, according to the score from the Congressional Budget Office.

Under a draft measure we reported on earlier this week, producers classified as “economically distressed” could qualify for payments equal to their entire debt on USDA loans. Loan payoffs for other producers would be capped at $200,000. The bill also would provide $1 billion to USDA to adjust loans.

By the way: That cost estimate for the previous program, which has been blocked by the courts over constitutionality challenges, has grown from $4 billion when it was enacted in March.

The debt relief is intended to be included in Democrats’ budget reconciliation bill. For more on the implications of the draft conservation provisions, read our weekly Agri-Pulse newsletter today.

Lisa Schulte Moore, a scientist at Iowa State University who developed sustainable agriculture techniques for corn and soybean farms, is getting a $625,000 “genius” grant from the MacArthur Foundation.

Under a practice she developed, strips of native perennial prairie vegetation replace a portion of a field’s crops, dramatically reducing soil erosion and nitrogen and phosphorus runoff.

“By approaching the serious challenges of food security, climate change, and conservation of our environment as networked pieces of a larger system, Schulte Moore opens new possibilities for a transformation in sustainable agriculture,” the foundation says.

Senators and House members from seven states say in a letterthat reducing the renewable volume obligations would undermine the administration’s commitment to reducing greenhouse gas emissions. According to industry sources, EPA has been considering cuts in the RVOs reflecting reduced gasoline consumption.

“We have strong reservations about the potential for the administration to destroy over 5 billion gallons of biofuel volume from the 2020, 2021, and 2022 (RVOs),” the lawmakers write.

A GOP view: “If these rumors are true, it’s going to be the worst week in Washington for ethanol ever,” said Sen. Chuck Grassley, R-Iowa, told reporters on Tuesday. 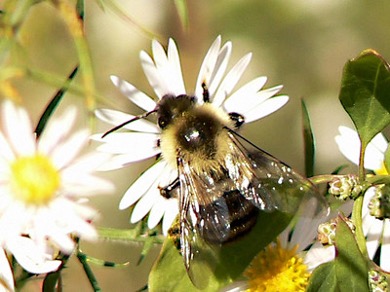 The American bumble bee may be headed for the endangered species list. The Fish and Wildlife Service has issued a positive finding on a petition to designate the insect as endangered.

The petitioners, including the Center for Biological Diversity and Bombus Pollinators Association of Law Students of Albany Law School, presented information suggesting the bee is threatened by “habitat destruction from agricultural intensification, livestock grazing, and pesticide use; loss of genetic diversity; climate change; and competition from nonnative honeybees.”

The Environmental Protection Agency has awarded about $6 million to four institutions, including Michigan State and Johns Hopkins universities, to study potential risks of biosolids, also known as sewage sludge.

“When biosolids are applied to land, they add nutrients, improve soil structure, and enhance moisture retention,” EPA said. But they also contain a variety of pollutants, including PFAS, a group of toxic and highly persistent chemicals that have been found in well water around the country.

The $1.5 million grant to Michigan State is designed, using lab and field experiments, to “fill the knowledge gaps on the occurrence, fate, transport, and plant uptake of pharmaceuticals and personal care products and per-polyfluoroalkyl substances (PFASs) at the nexus of biosolids, soil, water, and crops,” EPA said.

The Colorado-based biofuels company Gevo has announced it is receiving a new patent for its process to turn ethanol and bio-based alcohol into renewable diesel and jet fuel.

Gevo expects to finish construction in 2024 on a facility in Lake Preston, South Dakota, that can process 30 million bushels of corn per year, producing 46 million gallons of jet fuel, according to CEO Patrick Gruber.

We have more on sustainable aviation fuel in this week’s Agri-Pulse newsletter.

Ukrainian farmers will have a bumper walnut harvest, this year and the country is expected to export a lot more in the 2021-22 marketing year after a decline in 2020-21, according to a new analysis from the USDA’s Foreign Agricultural Service.

The FAS office in Kyiv is now predicting that Ukraine will export about 108,000 metric tons of walnuts in 2021-22, up a whopping 45% from the previous year when shipments “suffered due to a fall in global demand resulting from COVID-19.”

Most of Ukraine’s walnut exports are sold to buyers in the European Union, a major market for U.S. producers as well.