'Middle ground' on WOTUS elusive if not impossible

EPA Administrator Michael Regan has said repeatedly he wants to craft a “durable” definition of “waters of the United States” in the Clean Water Act — one informed by Supreme Court precedent and input from a variety of stakeholders.

The goal is to get a rule that could survive multiple administrations and inevitable court challenges. But it will be challenging, if not impossible, to come up with a definition that can satisfy all sides in the ongoing debate.

"That's the million-dollar question," said Ryan Yates, managing director of public policy at the American Farm Bureau Federation, when asked whether a definition could be written that could be accepted by farmers, environmentalists and the federal agencies themselves

“I can't really tell you a middle ground that could even have the possibility of having support among the different interest groups,” says retired Justice Department Clean Water Act attorney Stephen Samuels.

“Everyone’s got their own agenda,” he says. “And if you do anything to make one of those groups a little happier, you're making all the other groups less happy.”

The dividing line has been pretty clear from early in the latest round of rewriting. Environmentalists were, for the most part, happy with the Obama administration’s 2015 Clean Water Rule (aka “WOTUS”) while industry groups, including most farm organizations, preferred the Trump administration’s Navigable Waters Protection Rule (NWPR).

“We’ve learned lessons from both, we’ve seen complexities in both, and we’ve determined both rules necessarily did not listen to the will of the people,” Regan told House appropriators in April.

The 2015 Obama rule was struck down by courts covering about half the states in the country. The NWPR was invalidated nationwide by a federal judge in Arizona. Even before that decision, however, EPA and the Corps said that the NWPR “is leading to significant environmental degradation,” Regan said in June.

The hope of all involved in the process is that the next regulatory attempt will result in a solution that can stand the test of time. Ideally, Congress would rewrite the ambiguous law, which aims to “restore and maintain the chemical, physical, and biological integrity of the nation's waters," but given the difficulty of getting just Democrats to agree on the issue, the chances of that happening are slim if not non-existent.

The law emphasizes protection of “navigable waters,” but then defines that as “waters of the United States, including the territorial seas,” but without any further explanation, which has led to decades of confusion over the extent of the government’s jurisdiction.

For Scott Yager, chief environmental counsel at the National Cattlemen’s Beef Association, a “durable” rule means one that can survive Supreme Court review.

“They're going to have to be very thoughtful, and insightful, and collaborative, and inclusive in the process,” Yager said of the EPA and Army Corps of Engineers, which have joint jurisdiction over the CWA’s Section 404 program. “Because we know that this issue is so politicized, one false move and it's going to get capsized.”

Regan has emphasized repeatedly that he wants input from farmers, and the agency has announced it will hold regional roundtables this winter on the WOTUS rewrite.

"Can compromise be found? I don't know," Yates said. "I don't know what that looks like." He said he could not comment in detail until EPA and the Corps release a proposal, but said, "We thought [the NWPR] was a very good compromise rule."

The ag sector, and U.S. industry in general, have embraced the idea that “navigability” must be essential to any definition of WOTUS. That’s why they liked the Trump administration's Navigable Waters Protection Rule and its emphasis on navigability in defining the scope of regulated waters. The NWPR also eliminated protection of ephemeral streams — those that flow only as the result of snow melt or rainfall — and regulated intermittent streams only if they contributed flows to navigable waters.

“The Navigable Waters Protection Rule is a rule a lot of these groups wanted,” National Wildlife Federation Director of Legal Advocacy Jim Murphy said. “And they feel, whether it's genuine or not, that the Clean Water Act interferes with their ability to do business.”

Murphy, however, points to exemptions already in the law for “normal farming” activities such as plowing, seeding and cultivating, and holds out hope that some in the farming community will come around to the view that strong Clean Water Act protections are needed, particularly with climate change-caused flooding and drought which “is only going to get worse.”

Asked about ag’s opposition to protections for ephemeral streams, Yager says farmers and ranchers “do want to preserve water features and use them,” but they also don’t want those features to prevent them from making necessary improvements to their operations.

He said he’s concerned that EPA and the Corps “are justifying this whole ‘repeal and replace’ of the Trump rule based on the arid Southwest, and a number of negative jurisdictional determinations that came out of Arizona and New Mexico.”

That suggests to him that EPA and the Corps want to regulate ephemeral features. “If that's the case, we're going right back to 2015,” he said. “And we're going to fight the same exact battle."

It was a federal judge in Arizona who struck down the NWPR, citing the risk of “serious environmental harm,” particularly in the dry Southwest states.

Yager would like to see EPA conduct a “meeting of the minds” with agricultural representatives to work out a deal that both sides could live with.

EPA also should meet with environmentalists, he said, but added he thinks “environmental groups have the home base advantage with the people who are running the EPA right now.” 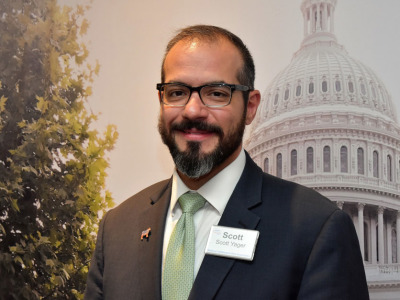 Samuels doesn’t buy that. Citing his own experience dealing with EPA, he said, “They would lean over to not upset farmers more than they would to not upset environmentalists.”

Samuels thinks there needs to be a broad effort to gather information from “people who are actually on the ground and understand what's going on with the flow of water — people who run farms.”

Steve Moyer, vice president of government affairs at Trout Unlimited, agreed, saying it would be a "really good step" to bring together knowledgeable people on all sides of the issue.

Moyer also said he does believe a compromise can be reached and that "there's a cadre of really good agency people in place" who want to come up with a lasting solution.

Samuels, however, said, “I'm a strong believer in making an attempt to get a proposal either for ultimate rulemaking or for legislation that has the support from the beginning of the regulated community, as well as environmentalists,” he said, but added, “It’s pretty much wishful thinking, right?”