The Biden administration’s COVID-19 vaccination mandate for the federal workforce could leave some areas of the Agriculture Department short-handed, but it’s still too early to tell.

The department said it has no data to share on vaccination rates because the deadline to provide proof of vaccination is Nov. 8, with the vaccination requirement kicking in Nov. 22. A spokesperson also declined to answer questions about how many employees have asked for “reasonable accommodations” to avoid the shots for medical or religious reasons.

Ag Secretary Tom Vilsack has said farmers will not see a reduced level of service because of the mandate. At an Oct. 7 House Agriculture Committee hearing, he told Rep. Vicky Hartzler, R-Mo., that USDA would do what it has to do to keep offices open. “I don’t anticipate we will see a significant number of closed offices,” he said.

But some in Congress are questioning the administration’s assumptions about the mandate’s impacts. In a letter to the heads of the Office of Personnel Management, General Services Administration and Office of Management and Budget, Republican members of the House Committee on Oversight and Reform said OPM, OMB and GSA officials did not provide evidence at a recent briefing of their belief that “there will be minimal employee attrition due to these mandates.”

“If they are wrong about attrition from either [employees or contractors], they risk significant disruption of agency missions, major adverse consequences for workers, families and businesses, and the breach of an untold number of federal contracts,” Reps. James Comer, R-Ky., and Jody Hice, R-Ga., said.

A representative of the National Association of FSA County Office Employees said “NASCOE has informed USDA that while we support COVID-19 safety protocol, we believe the federal mandate will have a negative impact on our workforce.” The representative also said she did not know how many people have asked to be excused from the requirements on religious or medical grounds.

"NASCOE has heard from some members who have indicated they would retire or otherwise leave federal service as a result of the vaccine mandate, but does not have any estimated totals," the rep said.

FSA employees recently asked that they be allowed to undergo regular COVID testing in place of the shots, but FSA Administrator Zach Ducheneaux turned them down.

And a major union, the American Federation of Government Employees, sued the federal government in federal court in Florida Oct. 30, claiming constitutional violations on behalf of federal prison employees who are bargaining unit members. 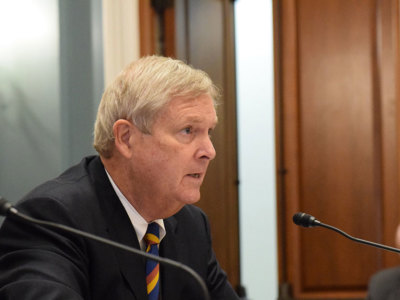 Mike Randall, president of the National Association of Agriculture Employees, which represents Plant Protection and Quarantine personnel in the Animal and Plant Health Inspection Service, told Agri-Pulse the department is facing “several thousand” requests for religious or medical accommodations. USDA has nearly 100,000 employees, according to its website.

“The workforce is going to take a huge hit,” said Paula Schelling-Soldner, who was recently elected as chair of the National Joint Council of Food Inspection Locals, which represents about 6,400 meat and poultry inspectors. “I think the attrition rate through all of this is going to be at an all-time high.”

Schelling-Soldner said the Food Safety and Inspection Service usually processes about 500 disciplinary actions per year, but that it expects to process that many just because of the vaccine mandate.

“I believe that there have already been some people that have handed in their retirement or resignation papers, just because they don't want to have to deal with it,” she said, with still others allowing themselves to be fired.

Workforce issues may extend to hiring, she said, mentioning conversations she has had with potential recruits at FSIS events. The situation is “just miserable,” she said, in part because of sign-on bonuses being offered by meat companies to attract workers during the current labor shortage.

To compete, FSIS recently approved a $5,000 signing bonus, though Schelling-Soldner said she’s not sure whether that will sway someone with strong convictions about not getting a vaccine.

Randall said he is concerned about the loss of some temporary or seasonal employees and that managers are currently examining which areas might end up short-staffed.

If there are shortages, however, management has the authority to “TDY” employees, Randall said, using the government shorthand for “temporary duty.”

Agencies can begin progressive disciplinary action on Nov. 9 for unvaccinated employees, but if an employee has asked for an exemption, that process won’t begin until after the reasonable accommodation request has been considered.

The National Federation of Federal Employees, which mostly represents firefighters and Forest Service employees among its 20,000-25,000 USDA members, says it doesn’t know how many will leave federal service.

But NFFE spokesperson Matt Dorsey said “the Safer Federal Workforce Task Force has asked USDA leadership to identify key areas within the agency, and employees in those areas may receive additional accommodations to ensure the mission of USDA continues to be fulfilled. For example, certain firefighters may fall into this category, as their positions are vital to the agency’s ability to manage and combat wildfires.”

NFFE says it believes no one should be fired for refusing to get a vaccine. “We recommend that all employees receive the vaccine to promote workplace safety, but we do not believe employees should lose their jobs for not complying,” he said. “We would like the USDA to retain all of its employees for their expertise, knowledge, and experience, but we understand this may not happen.”

USDA, like other agencies in the federal government, may suspend an employee who does not get a COVID-19 vaccine. Punishment can ultimately include dismissal from government service; even if the disciplinary process has begun, just getting a vaccination will bring that to an end.

OPM guidance says “employees generally should not be placed on administrative leave while the agency pursues disciplinary action for refusal to be vaccinated but will be required to follow safety protocols for employees who are not fully vaccinated when reporting to (their) agency.”

USDA spokesperson Kate Waters said the first step for employees who do not comply by the deadline “is a period of education and counseling.”

In addition, employees have received “frequent email reminders” from Vilsack and Bronaugh. Employees who have not responded to a proof of vaccination survey also have received targeted emails.

Vilsack made a plea on Twitter on Oct. 27, noting that his sister had died of the flu and that when his granddaughter was born with a respiratory infection, he did not hesitate to get a flu shot to protect her.

“As you consider whether to get the COVID vaccination or not, I implore you to think about the most vulnerable people in your community — the elderly, the children, and those with compromised immune systems,” he said. “Our Nation can overcome anything, but we need to do it together.”