Home » Opinion: What is driving pessimism in farm country?

Opinion: What is driving pessimism in farm country?

When I began my tenure as ranking member of the U.S. Senate Committee on Agriculture, Nutrition, and Forestry, optimism was high in farm country. After six years of depressed commodity prices, rising farm bankruptcies and record levels of farm debt, this year the economic outlook finally seemed as if it was turning a corner.

Many commodity prices reached their highest level since 2013, agricultural trade with China is poised to break last year’s record and the U.S. Department of Agriculture’s projection for farm profitability during 2021 is expected to reach the second highest of all time at $117 billion.

According to the CME Group and Purdue University’s Ag Economy Barometer, farmer sentiment on the conditions in the ag economy were record high early in 2021. We are less than a year removed from that time, and yet that promising outlook has diminished.

Now the ag economy barometer finds producers are far less optimistic about current farm conditions and expectations for the future. That metric dropped to its lowest level since the height of the pandemic last summer. 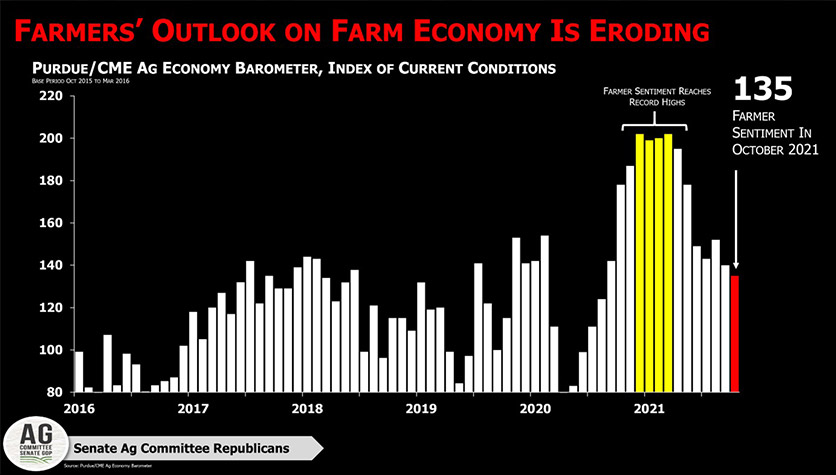 What’s behind that pessimism? Inflation. Over one-third of the survey’s respondents expect production costs to rise by at least 12 percent over the next year.

The cost of farming is on the rise. Land, machinery, labor, fuel, seed, fertilizer and livestock feed prices are all increasing. You can draw a straight line between many of these price increases and the Biden administration’s reckless spending agenda and indifference to the challenges currently facing our supply chain. The president is pursuing policies that have driven inflation to its highest level since 1981 and made energy sources on which producers rely scarce and expensive.

On President Biden’s first day in office, he put a freeze on crucial development of domestic energy production and blocked a permit needed for the continued construction of the Keystone XL pipeline. This decision has pushed the price of diesel to its highest level in more than six years. Diesel is more than 60 percent more expensive than last year. As a result, farmers will spend billions of dollars more this year on fuel costs for activities like harvesting crops, hauling milk or planting fall cover crops.

Opinion: As Foreign Nations Invest Big, the Farm Bill is an Opportunity to Demonstrate American Leadership in Indoor Agriculture
Opinion: What do poor balance sheets, trade wars, Impossible Burgers and trial lawyers have in common?
Opinion: Build Back Better is a once-in-a-generation opportunity for U.S. agriculture

Propane, heavily relied upon in rural America, serves many purposes on the farm. It is used to dry harvested crops, keep livestock warm during the winter, manage irrigation systems, control weeds and fuel power generators. Not to mention, it is the main source for heat for many communities in rural America. Along with prices 50 percent higher than they were this time last year, propane supplies are near five-year lows as we head toward the winter.

Other farm inputs like liquid nitrogen, phosphate, and potash have all doubled in price compared to last fall. The bottom line—it’s going to cost farmers a lot more to grow crops this winter and next spring.

These higher farm production costs are likely going to drive two bad outcomes: tighter farm operating margins in 2022, and higher food costs for Americans and their families. The latter is already happening. Food price inflation is at the highest point of any President since Jimmy Carter. 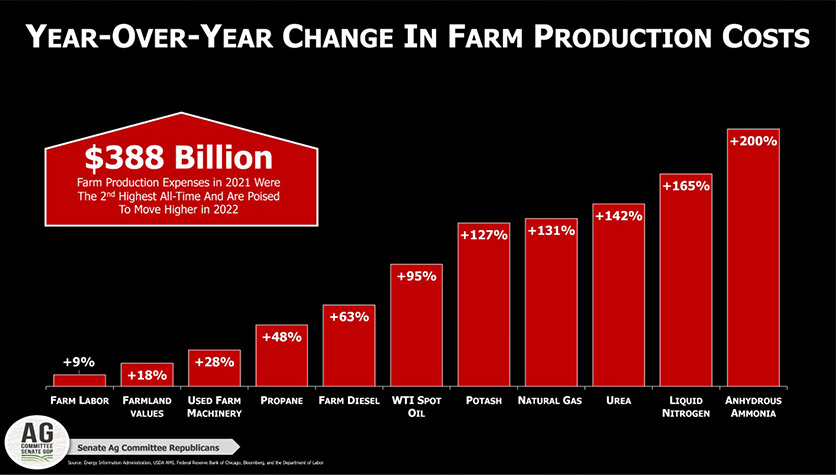 Instead of working with Republicans to address this crisis, Democrats are fixated on passing the president’s cradle-to-grave social agenda on their own. Their myopic focus does nothing to address the drivers of inflation, such as the labor shortage and supply chain disruption. The price tag that accompanies this package, estimated by some academics to be as high as $4 trillion, is sure to continue to push inflation even higher.

It’s time for the Democrats to reach across the aisle and work with Republicans to find bipartisan solutions for a historically tight labor market, bottlenecked supply chains and runaway inflation. These are the issues that farmers and ranchers consistently tell me must be solved now, before the damage gets worse. Democrats need to listen to our producers and work with us to address their needs, before President Biden’s reckless policies force the exodus of more family-owned farms from rural America.

For more opinions and ag news go to www.Agri-Pulse.com.