The Army Corps of Engineers' 2022 spending plan, which includes new federal funding for longstanding projects, is generating positive feedback from farm country and others who depend on the nation's rivers and ports.

Advocates for the nation’s inland waterways are expressing joy and relief at the announcement the Army Corps of Engineers will complete the expansion of Lock and Dam 25 on the Mississippi River at Winfield, Missouri, as part of its 2022 work plan. Agricultural users who rely on the Mississippi River system to move grain to port terminals and to bring inputs such as fertilizer upriver have long sought improvements to the locks and dams that are necessary for hauling heavy loads.

“We are extremely pleased to report that a significant priority of the soybean farmers – Lock and Dam #25 – was included on the list,” Mike Steenhoek, executive director of the Soy Transportation Coalition, said in a statement after the Army Corps announced its plans last week.

“We were thrilled to see that be fully funded to completion, that's something that we've been pushing for a very long time,” said Deb Calhoun, senior vice president at the Waterways Council. “It's so critically important to our agriculture members,” who include national and state commodity groups, fertilizer companies and large agribusiness exporters.

The Lock and Dam 25 project will create a 1,200-foot lock, double the size of the current one. Calhoun said the upgrade is part of the Army Corps’ Navigation and Ecosystem Sustainability Program (NESP), which was authorized in 2007 to modernize navigation and restore habitat. Other NESP projects that also are funded to completion under the 2022 work plan include the Kentucky Lock on the Tennessee River and the Montgomery Lock on the Ohio River. 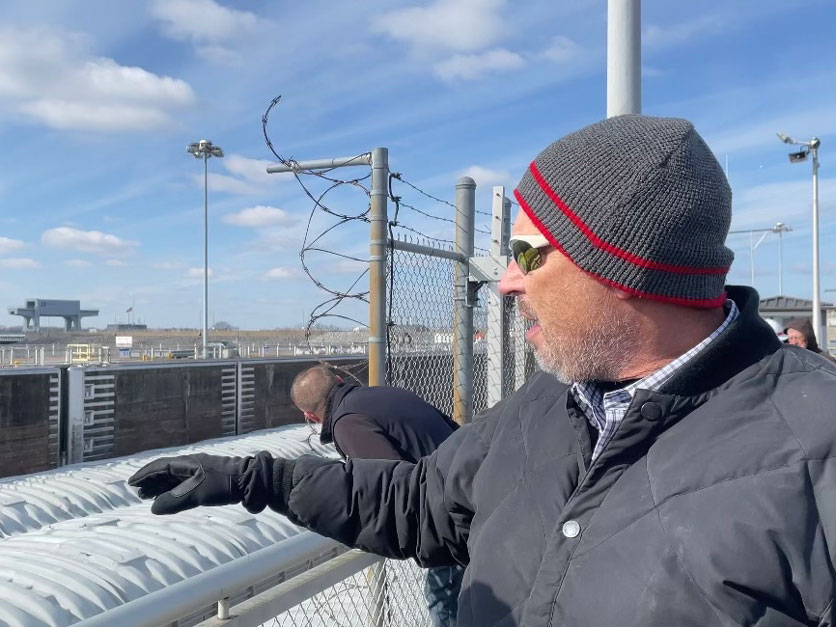 Jim Tarmann, Managing Director of the Illinois Corn Growers Association and Illinois Corn Marketing Board, watches as barges enter Kentucky Lock on Jan 20. Calhoun said the expansion means a tug will save a couple of hours in transport because it will no longer have to unlash barges, send through no more than nine at once, and then re-lash them on the other side. In addition, she said the modifications mean if something causes the 1,200-foot side to become unavailable, barges could still move through the old 600-foot lock, rather than shutting down passage altogether, as would happen now.

“Time is money, and getting these products from the family farm to the export market is critically important,” she said, noting that the general public has become increasingly aware of what happens when supply chains are disrupted. “This is no different. We need to be able to do these lockages on the waterway system as efficiently as we can.”

She noted that new funding in the Infrastructure Investment and Jobs Act is bringing these projects to completion.

Steenhoek said for farmers, a more efficient and resilient inland waterway system has the potential, eventually, to bring them more competitive prices for their grain.

“The price that farmers receive at point of sale is significantly influenced by how efficient or inefficient transportation is after that delivery is made,” he said. When the exporters face increased costs, he said they often pass those on to the farmers by offering them a lower price (or more negative basis).

On the flip side, though, Steenhoek said “if you make enhancements to the transportation system, that savings is often passed on to farmers in the form of a more narrow basis, or even sometimes a more positive basis.” It may not be immediate, but “because you've made the supply chain more efficient, those savings get passed on to the farmer.”

Steenhoek said the incentive for the buyers to offer a more competitive price to farmers, rather than banking the savings for their own profit, is to keep farmers choosing them rather than turning to a local crushing facility or elevator.

Shippers, he said, recognize “we have to have competitive prices, otherwise farmers won’t deliver to us.”

Ahead of releasing the 2022 spending plan, Army Corps leaders appeared before both House and Senate committees. Assistant Secretary of the Army for Civil Works Michael Connor and Lieutenant General Scott Spellmon of the Army Corps of Engineers went before the Senate Environment and Public Works Committee and the House subcommittee on water resources and environment, where members of Congress highlighted specific needs in almost every region of the country.

“Much of the water resources infrastructure that the Army Corps owns and operates was constructed over 75 years ago and will require significant investments to maintain,” Connor told the senators. “As the Army works on policy and administrative changes to improve infrastructure development and regulatory responsiveness, my staff and I are looking at authorities, policy, regulations and procedures to identify opportunities for increased efficiency and effectiveness.”

Rep. Jared Huffman, D-Calif., raised the issue of dredging, noting there is a backlog at some West Coast ports, which he blamed in part on less private industry participation than in the East. Spellmon said he met with dredging companies during a recent trip to San Francisco.

“The investment that Congress is making in our ports and waterways … it is forcing us to take our coordination, our scheduling with industry, to a new level and we're working hard on that,” Spellmon said. “Industry is also bringing on new vessels into their fleet this year.”

He added that while some companies have vessels idling right now, he expects as infrastructure bill funding rolls out, all available equipment “will be back out in the water working again.”

U.S. ag exports that are headed to Europe or Africa may leave the country from East Coast ports, but most products, especially grain, either travel the inland waterways system to the Gulf of Mexico or are sent on trains to the West Coast, Steenhoek said.